Young farm worker wants to take care of his family 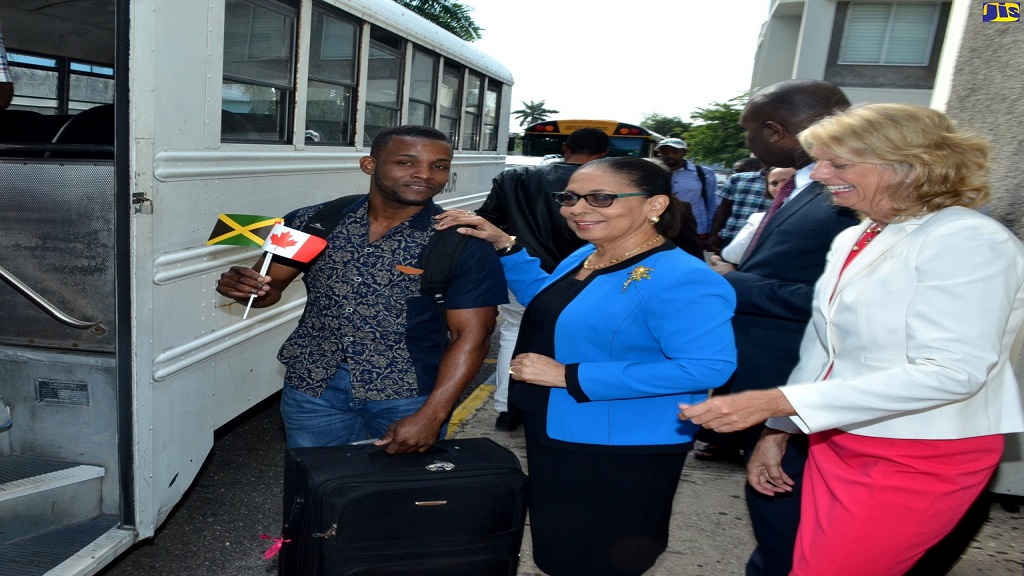 Minister of Labour and Social Security, Shahine Robinson (centre) and High Commissioner of Canada to Jamaica, Laurie Peters (right), bid farewell to Jermaine Wilson, as he boards the bus that will take him and other Jamaicans to the airport for departure to Canada recently. (Photo JIS)

The decision to be separated from his heavily pregnant girlfriend for eight months is not an easy task for first-time farmworker, Jermaine Wilson.

This is further compounded by the fact that he will not be present for the birth of his first child later this month.

Despite the apprehension, Wilson is reassured by the fact that his absence means he will be entering into a job in Canada and will therefore be in a better position to take care of his family back home.

He is among a batch of close to 300 Jamaicans who have taken up employment opportunities in Canada under the Seasonal Agricultural Workers Programme (SAWP).

“My girlfriend should have the baby about January 23, and I am not going to be here, but it’s the best for us, so I have to go and do my best and provide for them and see to it that they are alright and all is well,” he told JIS News during a send-off ceremony at the Labour Ministry’s Overseas Employment Services Centre, in downtown Kingston recently.

Wilson, who is slated to return to the island when his child will be eight months old, is grateful for the opportunity that has been provided through SAWP.

He says that advancements in technology will allow him to communicate with his family members on a regular basis and that he eagerly awaits photographs of his young child.

Most of the seasonal agricultural workers will be employed in Ontario in areas such as Leamington, Tillsonburg, Bradford, Simcoe, Milton, Strathroy and Goderich. They departed the island on January 3 and 4.

The SAWP has steadily provided employment opportunities for Jamaican workers since 1966.

Describing the programme as a “blessing”, experienced worker, Howard Anderson encourages first-time participants to use their goals and aspirations as reminders of why they are on the programme.

He notes, too, that constant contact with family members will also help individuals to cope better.

Expressing appreciation for the opportunities the initiative has afforded him thus far, Ian Underhill, who will be working in Leamington, urged participants to be honest and hard-working.

“I thank God for it because it helps me to take care of my children and school my children, because when I was growing up, my parents never have it to help me in school so much, and I come now and got the opportunity to help my children. I thank God for all seven of them…they have qualification now that can help them,” he said.

Having helped his children in acquiring their education, Underhill says he “is just doing a little now to help me and my wife and to finish up my little home, so we can have a nice home”.

Meanwhile, Minister of Labour and Social Security, Shahine Robinson encouraged the workers to be good ambassadors by carrying out their duties diligently and conducting themselves appropriately at all times.

“Maintain a professional attitude… both on and off the job. Be your brother’s keeper, listen to the instructions of your employers, and try to work to the best of your ability,” she told them.

The minister advised the workers to observe all the safety procedures and regulations that have been implemented and “if something goes awry and you are hurt, report it immediately to your employer, so that it can be addressed, and also to your Liaison Officer”.

She also encouraged them to keep sight of their goals. “When you received the call from the Ministry that you should prepare yourself for travel to Canada, apart from the excitement that you felt, you must have made some plans, came up with some ideas as to what you would like to achieve and a vision of how you and your family could benefit from this opportunity. Do not lose sight of this, for this is what will motivate you to try even harder when the going gets tough,” the minister said.

The SAWP is part of the ministry’s Overseas Employment Programme and involves contractual agricultural workers who are recruited to meet the short-term demand for manual labour during planting and harvesting seasons.

They are employed in greenhouse crop production, vegetable farming and fruit tree cultivation.