World Cup: Guide to the 12 stadiums across Russia 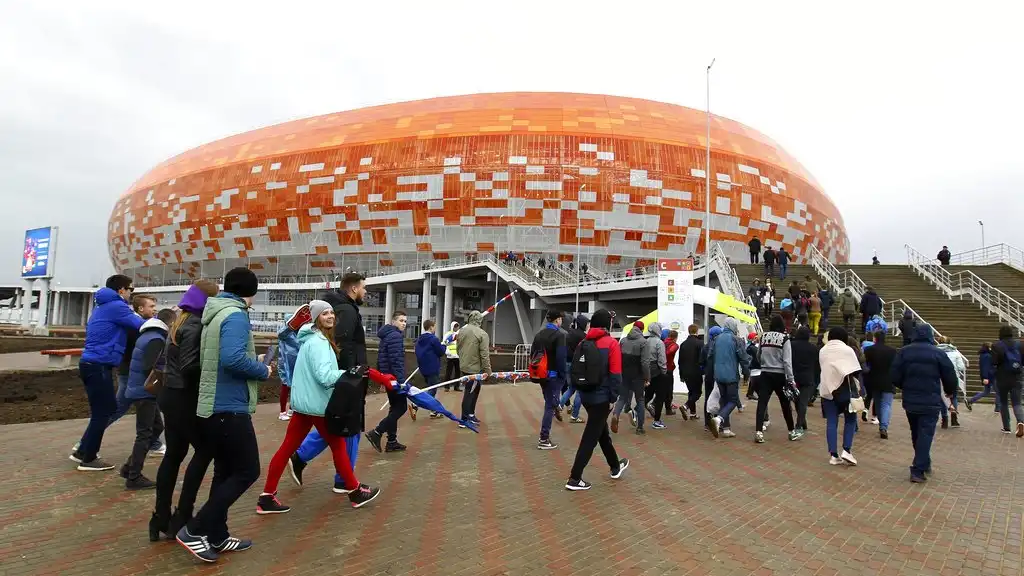 In this photo taken on Saturday, April 21, 2018 walk to the new World Cup stadium to watch the Russian second league soccer match between Mordovia and Zenit-Izhevsk in Saransk, Russia. (AP Photo/Julia Chestnova)

Russia's World Cup is spread across 12 stadiums in 11 host cities. They range from St. Petersburg, which is so far north that the sun doesn't set on some summer days, to Sochi and its subtropical climate on the Black Sea coast.

Unlike in Brazil four years ago, venues are finished on time, but there's sure to be a few last-minute tweaks.

Legacy is an issue as only five stadiums hosted top-level clubs this season, and the government will need to cover the upkeep with subsidies after the tournament.

Here is a look at the stadiums:

A vast bowl built in the 1950s to showcase the sporting might of the Soviet Union, Luzhniki has been transformed to host the World Cup final.

The old stands were ripped out and the athletics track from the 1980 Olympics torn up as the stadium was converted into a football-specific venue.

That increases capacity and comfort, while bringing fans closer to the action.

Luzhniki reopened on Nov. 11 when Argentina beat Russia 1-0 in a friendly. Russian fans praised the rebuild, but many were angered by lengthy delays in accessing nearby public transport. That improved for subsequent friendlies, but allow plenty of time for travel to Luzhniki and back.

A fan zone will show games on big screens near Moscow State University, on the other side of the river.

Home of the 2017 Russian Premier League champion Spartak Moscow, this stadium opened in 2014 and is already well tested as a venue for Champions League and Confederations Cup games.

It is usually known as the Otkritie Arena, but FIFA rules on sponsorship mean a temporary name change for the tournament.

The towering statue of a gladiator outside is a nod to Spartak being named after the Roman slave rebel Spartacus.

It is the only World Cup stadium built without government money. Transport is relatively easy from central Moscow, though chronic traffic jams mean most fans prefer the subway.

Almost everything that could go wrong did go wrong with the St. Petersburg stadium.

Severe delays and soaring costs were just the start for a project which became notorious for employing North Korean laborers, one of whom was among at least eight people to die on the stadium and 17 across all World Cup construction sites, according to the trade union Building and Wood Workers' International.

A deputy governor of St. Petersburg has admitted his role in a 50-million-ruble ($850,000) scheme to siphon off the stadium's budget, though officials say the true picture of corruption was much larger.

The spaceship-like arena — which will host a semifinal — remains plagued by a leaking roof and a pitch which had to be replaced repeatedly.

Confederations Cup games, however, passed largely without incident and Russia says it's working to iron out any more problems.

loopjamaica Guide to the 12 stadiums across Russia

While memories of the Sochi Olympics became dominated by Russia's doping scandals, one part of the legacy is still gleaming.

Nestled by the Black Sea, Fisht Stadium hosted the lavish opening and closing ceremonies for the 2014 Winter Olympics, and then Confederations Cup games.

How that Olympic legacy continues after the World Cup isn't clear; Sochi doesn't have a football club to use the stadium.

Fans are advised to book hotels near the Olympic Park because the main city of Sochi is an hour away.

Opened in 2013 as the first of Russia's new generation of football stadiums and was used as the prototype for the other new arenas.

It's a versatile venue which has hosted Confederations Cup football, ceremonies, and even the 2015 world swimming championships, where a temporary pool was installed.

This stadium in the Volga River city of Samara is ambitious but proved tricky to finish on time.

Its ambitious design — a glass dome evoking Samara's history as a center of the Russian space program — needed extra time to build but finally opened in April.

The stadium is on the outskirts of the city, so fans should allow plenty of time for travel to games including a World Cup quarterfinal.

With a roof which seems to float atop white columns, the Nizhny Novgorod Stadium has one of Russia's more impressive designs and will host a quarterfinal.

It also offers fans views of the Oka and Volga rivers which meet in Nizhny Novgorod, a historic city located around four hours east of Moscow.

Legacy could be a problem as local club Olimpiyets Nizhny Novgorod plays in the second tier and struggles to attract crowds.

Sweltering summer temperatures could be a problem for teams coming to the southern Russian steppe to play group or last-16 games in Rostov-on-Don.

The stadium sits on the bank of the Don river and is planned to become the center of a vast new housing and leisure development after the World Cup.

When the tournament is over, the stadium will be the new home of FC Rostov, which beat Bayern Munich in the Champions League group stage in 2016 but has since slipped back into the middle of the Russian standings.

In the city once known as Stalingrad, every spot has wartime history, and the stadium is no different.

Workers during construction had to deal with finding unexploded munitions and soldiers' corpses from the Battle of Stalingrad. The stadium sits at the foot of Russia's best-known World War II memorial.

The location meant the stadium had to be designed with a low roof-line so as not to obscure views of "The Motherland Calls" sculpture. German youth players were invited to a test game at the stadium in a gesture of international reconciliation.

Even before it opens, the stadium in the Ural mountain city of Yekaterinburg is famous for its unusual design.

In an attempt to keep costs down, the stadium has 12,000 temporary seats. So far, so normal for a World Cup.

However, those seats are on vast towers of scaffolding stretching over the walls of the main stadium, which could make being in the top row a vertigo-inducing experience.

Reducing the capacity to 23,000 after the tournament should make life easier for local club Ural Yekaterinburg, which averaged crowds of just over 8,000 in the Russian Premier League this season.

Human Rights Watch alleged that some workers were required to work in temperatures of minus-25 degrees Celsius, and weren't given enough breaks to stay warm.

With a population of just 300,000, Saransk was a surprise choice as a host city.

Located 10 hours by road south-east of Moscow, it's by far the smallest of the 11 cities but hopes to make up for that with a warm welcome for foreigners at the biggest international event in the city's history.

Many fans arriving for the World Cup won't be staying in hotels — Saransk simply doesn't have enough — but on campsites or in newly finished apartment blocks which will be sold after the tournament.

Large parts of the stadium are temporary, meaning it can be reduced to a 25,000-capacity venue after the tournament.

Kaliningrad is the capital of a sliver of Russian land cut off from the rest of the country and sandwiched between Poland and Lithuania.

Until World War II, the city was part of Germany and called Koenigsberg. Officials are hoping its location and history make Kaliningrad an attractive destination for fans from other European countries.

The stadium is a compact, modest design which has been built quickly.

There have been repeated allegations of corruption involving the stadium, including several arrests.