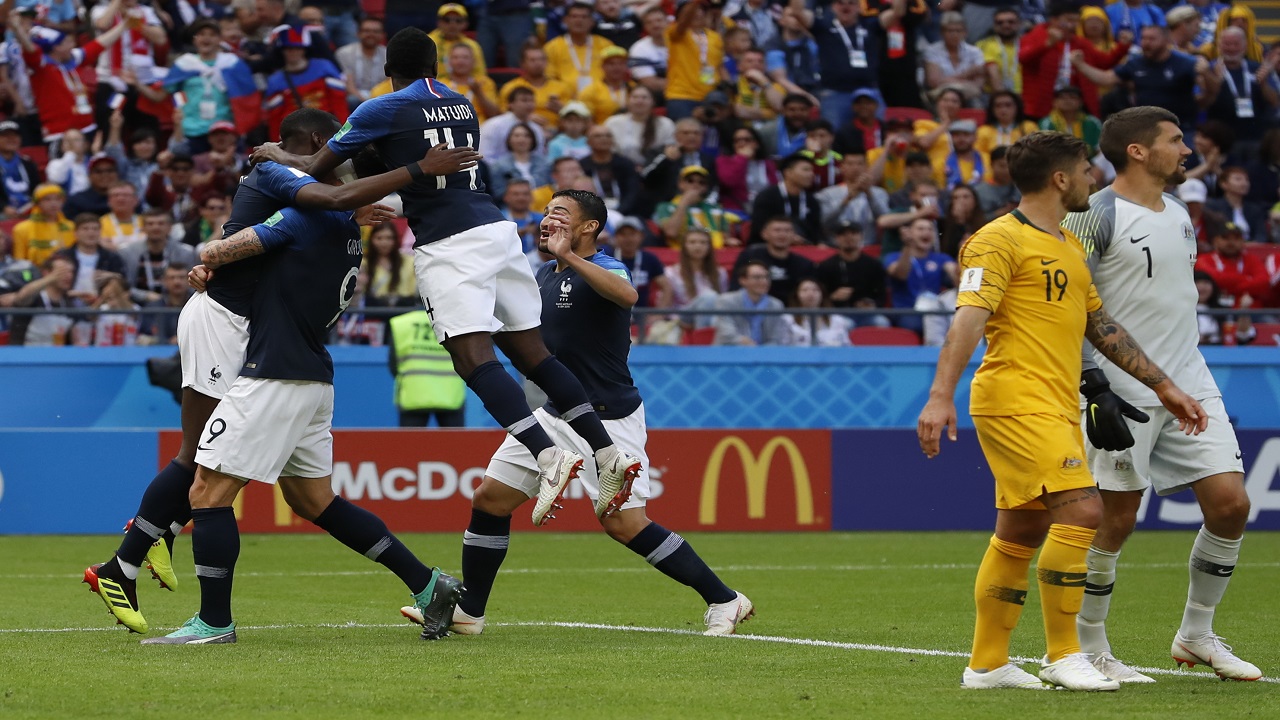 France player celebrate after scoring their side's second goal during the group C match against Australia at the 2018 football World Cup in the Kazan Arena in Kazan, Russia, Saturday, June 16, 2018. (AP Photo/Darko Bandic).

Antoine Griezmann scored the first penalty given by VAR in World Cup history as France edged past Australia 2-1 in their Group C opener on Saturday.

France were a long way from their best at the Kazan Arena, with their heralded attacking trio of Griezmann, Kylian Mbappe and Ousmane Dembele failing to ignite against a dogged Australian outfit.

After a disjointed first half, the game sparked into life shortly after the interval as referee Andres Cunha awarded a penalty to France after consulting VAR and deciding that Josh Risdon had clipped Griezmann just inside the area.

Didier Deschamps' side looked to be heading for a disappointing start to their campaign, but Manchester United midfielder Paul Pogba saw his deflected effort bounce off the crossbar and narrowly over the line 10 minutes from time to secure all three points.

France will hope for a more fluid performance against Peru on Thursday, while Australia will look to get their campaign back on track when they face Denmark.

Les Bleus had started the game in ominous fashion, carving out three chances in the opening six minutes.

First, Mbappe was denied from an acute angle by Mat Ryan before the Australia goalkeeper comfortably held a Pogba free-kick and Griezmann's half-volley from distance in quick succession.

Australia weathered that early storm, though, and came agonisingly close to taking the lead after 17 minutes.

Aaron Mooy's teasing free-kick from the left was diverted towards his own goal by Corentin Tolisso, but a scrambling Hugo Lloris was able to turn it around the post.

France's early verve was sorely lacking for the remainder of the half, with Australia able to keep their more illustrious opponents comfortably at arm's length before the interval.

The game finally burst into life 10 minutes into the second period with Griezmann's historic goal, which came at the end of a week in which his club future was the focus of intense speculation before he committed to Atletico.

Risdon had appeared to get away with his tackle on the marauding striker, but after a consultation with VAR the referee spotted an illegal clip on the Atletico striker's heel and awarded a spot-kick.

Australia bounced back superbly from that setback, though, and were level just four minutes later.

Umtiti's bizarre decision to handle Mooy's free-kick allowed Jedinak to coolly stroke past Lloris for what looked like being a share of the spoils.

Pogba had other ideas, though, sending a stabbed effort towards goal from the edge of the area which was cruelly diverted past Ryan by Aziz Behich to get the French off to a winning start.

- This is the fourth successive World Cup that France have started the tournament unbeaten (W2 D2 L0), last losing in 2002 against Senegal.
- Australia have lost four of their five opening World Cup games, with their only win coming against Japan in 2006.
- All four of Australian Mat Ryan's saves vs France came in the opening eight minutes, with the keeper conceding the next two shots on target faced.
- The two penalties scored in the game between France and Australia were only four minutes, seven seconds apart - the shortest period of time between two penalties being scored by different sides in a World Cup match.
- Daniel Arzani has become the youngest player to ever make a World Cup appearance for Australia (19y 163d).