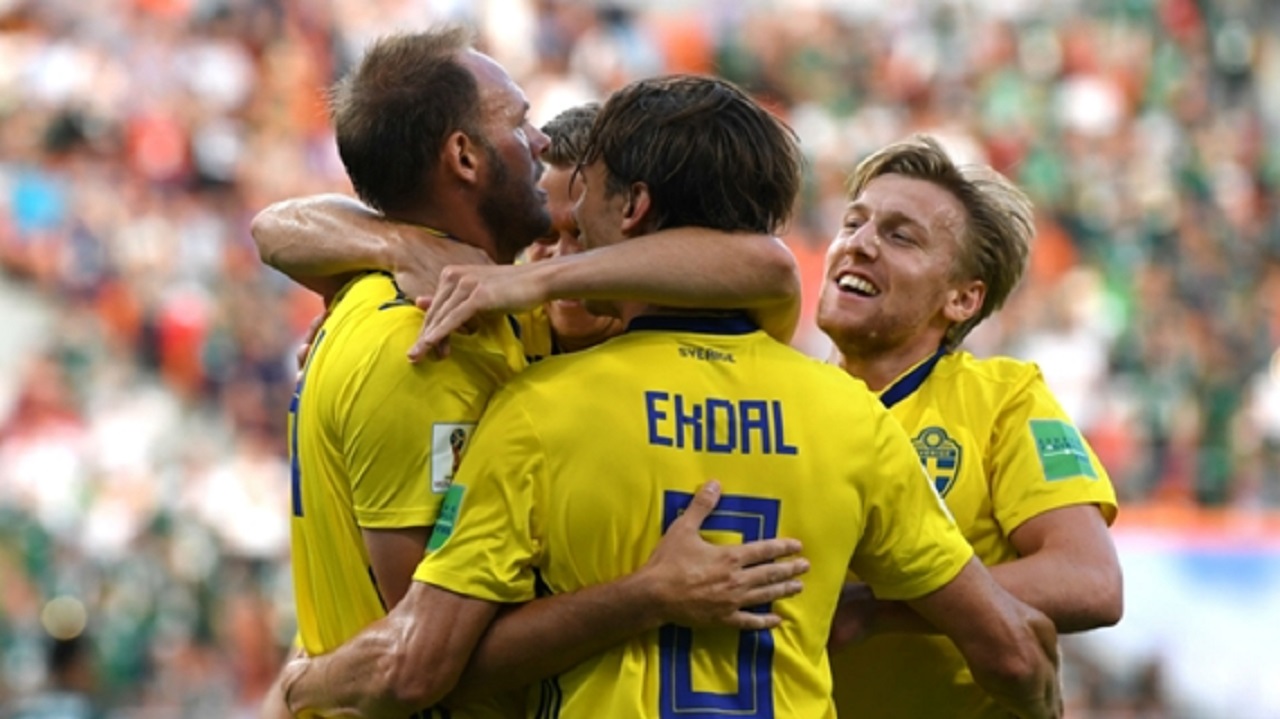 Sweden players celebrate their win over Mexico on Wednesday.

Sweden secured a place in the last 16 of the World Cup by thumping Mexico 3-0 in a pulsating encounter in Ekaterinburg on Wednesday, while defending champions Germany were eliminated.

Janne Andersson's side reaped the rewards of a relentless attacking display to secure top spot in Group F, with Mexico following them through as runners-up after Germany's shock 2-0 defeat to South Korea.

There were no lingering effects of the embittering late 2-1 loss suffered to Germany last time out as Sweden went for the jugular from the off, though they were denied a penalty for a blatant handball by Javier Hernandez despite referee Nestor Pitana reviewing video footage.

The impressive Guillermo Ochoa kept Emil Forsberg and Marcus Berg out in the opening period, but Ludwig Augustinsson volleyed a deserved opener through the Mexico goalkeeper in the 50th minute.

Andreas Granqvist rifled home 12 minutes later, when Pitana pointed to the spot for Hector Moreno's challenge on Berg, the Mexico defender's booking ruling him out of the last 16.

Edson Alvarez inadvertently sent the ball into his own net as Sweden moved out of sight, but the silver lining for Mexico was that they advanced because of Germany's failure against South Korea - leaving the world champions bottom of the group.

Jesus Gallardo was shown the quickest yellow card in World Cup history for a late challenge on Ola Toivonen after just 15 seconds, but the Mexico left-back cleared the resultant free-kick after Berg's knockdown fell just out of Granqvist's reach.

Sweden continued to pile on early pressure and, in the fifth minute, Ochoa reacted well to ensure Forsberg did not fire home a free-kick the goalkeeper conceded for handling outside the area – Granqvist complaining no card was issued.

Berg could not contort his body sufficiently to steer a header from Granqvist home, before Forsberg blazed two chances over in the space of three minutes.

Hernandez was fortunate not to concede a 29th-minute penalty for handball, referee Pitana signalling for play to continue with a corner after a trip to the monitor on the sidelines.

Sebastian Larsson had to be dragged away from berating the officials for the ensuing set-piece, from which Sweden went close when Berg had a stabbed attempt from Mikael Lustig's hooked ball tipped over by a leaping Ochoa.

Carlos Vela shot high and wide in a rare foray forward by Mexico, having sent his first attempt earlier in the match narrowly off target, while Berg drilled into the side-netting at the end of a stoppage-time counter-attack.

Sweden got the breakthrough their efforts deserved five minutes into the second period, Augustinsson volleying past Ochoa when Viktor Claesson's mishit sat up perfectly for him.

After granting Mexico a reprieve in the first half, Pitana pointed to the spot when Moreno slid in on Berg and Granqvist drilled into the top-left corner.

Sweden moved out of sight in the 74th minute when substitute Isaac Thelin flicked on a long throw-in and a muddled Alvarez sent the ball into his own net with his arm.

Vela could not steer a drive from Hernandez home from inside the six-yard box in the 82nd minute, but their journey reaches the last 16 for a seventh straight World Cup, despite a performance that was the antithesis of their opening 1-0 victory over Germany.