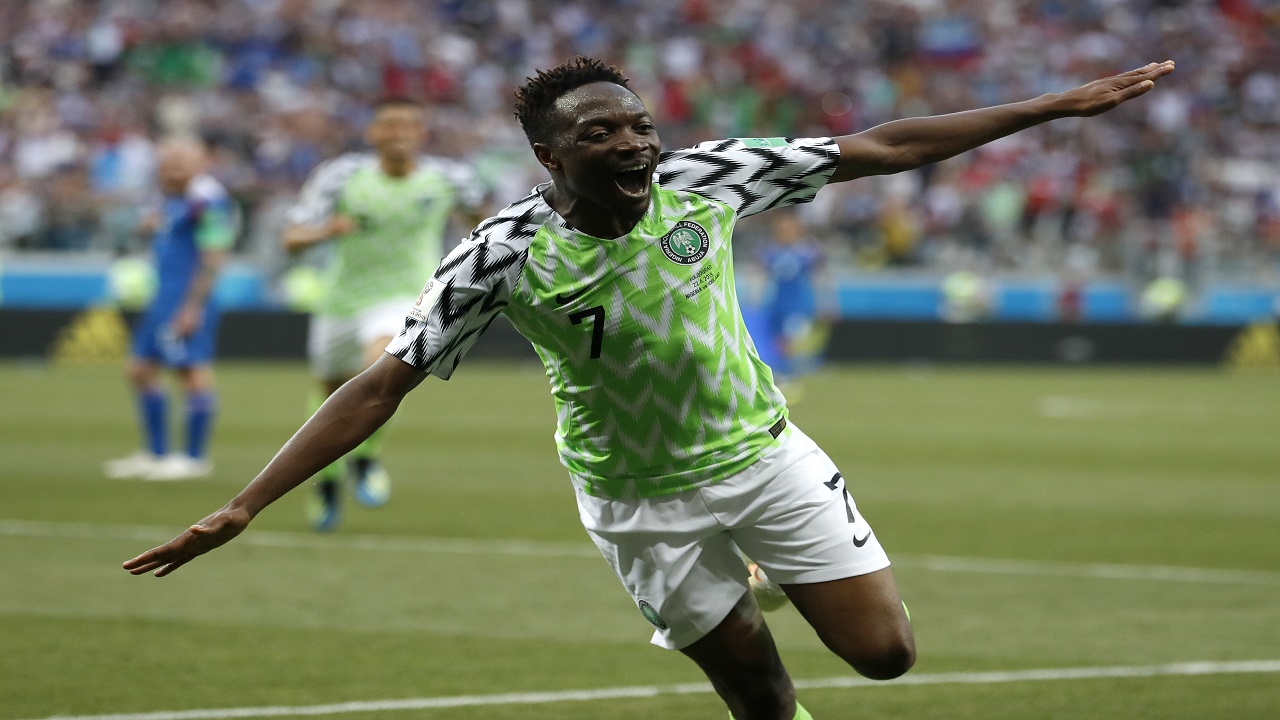 Ahmed Musa struck both goals as Nigeria boosted their World Cup qualification hopes with a 2-0 defeat of Iceland on Friday, a result that is also good news for Argentina.

Lionel Messi's team was pushed to the brink of an early exit after a stunning 3-0 loss to Croatia on Thursday, but victory in their final Group D game against Nigeria could now send them through to the last 16.

Musa was left out of Nigeria's loss to Croatia but he justified his recall to the side with the opening goal shortly after the interval at the Volgograd Arena on Friday.

The forward controlled a cross from Victor Moses and thumped an unstoppable drive into the roof of the net, with Musa becoming the Super Eagles' top scorer in the history of the tournament courtesy of his third World Cup goal.

Nigeria were poor in the first half - failing to record a single shot - but they were much improved after the break, Musa adding another to his personal tally in the 75th minute as Iceland's rock-like resilience crumbled.

After Gylfi Sigurdsson missed a late penalty, Heimir Hallgrimsson's side could be heading home from their first World Cup unless they beat already qualified Croatia and Argentina do not take three points against Nigeria, although goal difference could yet come into play.

Gylfi Sigurdsson had tested Francis Uzoho with an early free-kick as Iceland made a bright start.

Iceland's star man then fired a sixth-minute chance straight at the teenage goalkeeper, who dealt with a string of corners as both sides struggled for fluency in midfield.

But Iceland almost took the lead in the last minute of the first half, Alfred Finnbogason unable to get a decisive touch on Sigurdsson's dangerous free-kick delivered from the right wing.

Nigeria, in contrast, were unable to put any cohesive attacking moves together, meaning they became the first team at Russia 2018 to fail to record an attempt in the first half

They did test Hannes Thor Halldorsson just 14 seconds after the restart, with the goalkeeper easily saving from Oghenekaro Etebo, who had scored an own goal in his team's 2-0 defeat in Kaliningrad at the weekend.

However, the Super Eagles opened the scoring with their next attack in the 49th minute.

Moses led a rapid break down the right with his cross brilliantly collected by Musa, whose superb first touch took defender Ragnar Sigurdsson out of the equation. If Musa's first touch was good his second was even better, a lashed finish on the half-volley giving Halldorsson no chance.

Nigeria's confidence levels grew in the wake of the goal, Halldorsson having to be alert to tip over a deflected rifled drive from Wilfred Ndidi.

Musa rattled the crossbar as Nigeria pushed to seal all three points - and the striker would not be denied again in the 75th minute.

Fed by Kenneth Omeruo, Musa burst clear in the left channel, cut inside and slipped a calm finish past Halldorsson.

But a late injury to captain John Obi Mikel, who appeared to hurt his hand during six minutes of additional time, could be a concern for Gernot Rohr's side ahead of an all-or-nothing clash with Argentina.