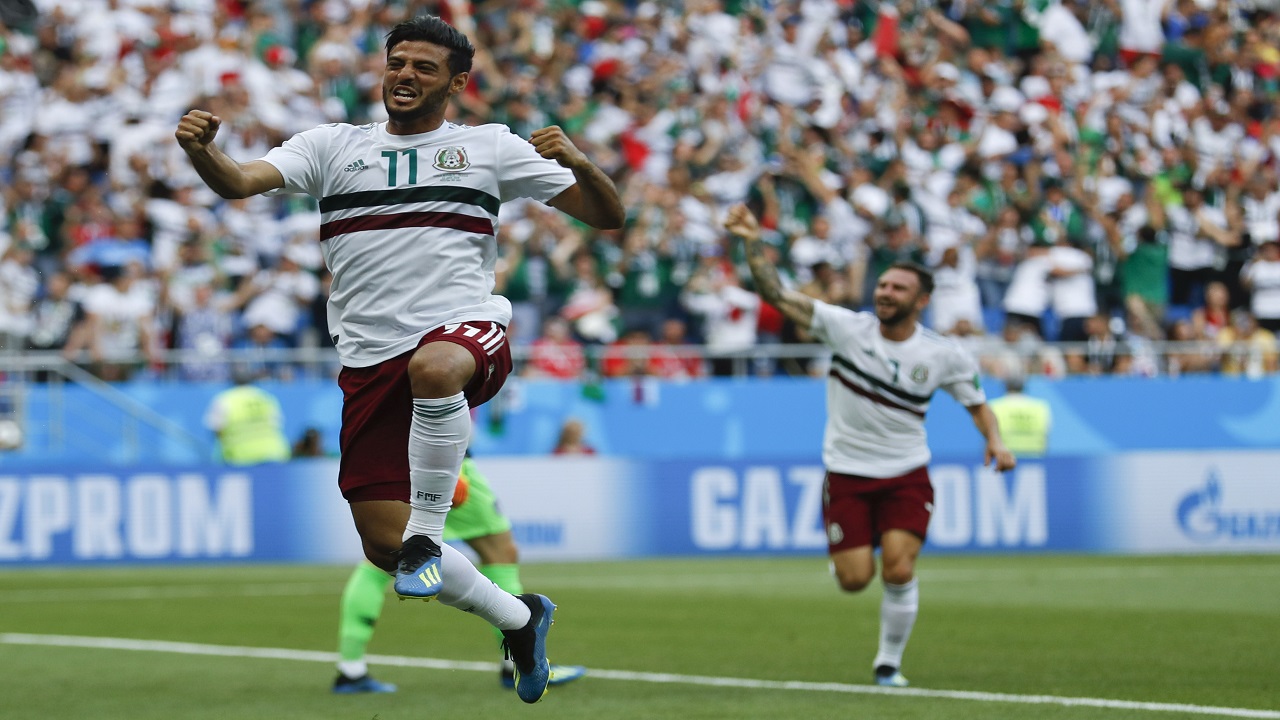 Mexico's all-time leading scorer was well marshalled by South Korea's defence for much of the clash in Rostov-on-Don, but took his chance when it came in the 66th minute, slotting home in composed fashion at the culmination of a wonderful counter-attack.

It was not always smooth sailing for Juan Carlos Osorio's side, though, with Lee Yong and Son Heung-min passing up presentable opportunities in the early stages.

However, Jang Hyun-soo's handball gave referee Milorad Mazic little choice but to point to the spot – the number of penalties awarded in Russia consequently surpassing the 13 across the entirety of the previous World Cup – and Vela, who announced the death of his grandfather following the win over Germany, converted.

Hernandez's strike means Mexico will progress to the last 16 if Germany fail to beat Sweden, with Son Heung-min's added-time stunner not enough to stop South Korea staring at a potential group-stage exit.

Hirving Lozano was Mexico's hero on matchday one and the winger proved his worth at the other end in the 12th minute with a superb block to deny Yong.

Mexico showed their quality on the break again when Miguel Layun fired in a cross that Lozano very nearly got on the end of, but they did not have to wait much longer to take the lead.

With South Korea's defence in disarray, Jang clearly handled Andres Guardado's cross and referee Mazic did not hesitate in awarding the penalty, Vela stepping up and sending Cho Hyun-woo the wrong way.

Vela almost turned provider two minutes later with a neat ball into Layun, but the former Watford man lashed his effort over from close range.

South Korea wanted a penalty of their own after the restart when Moon Seon-min's strike clipped Carlos Salcedo's arm, but the referee correctly waved away their appeals.

Ki Sung-yueng was the next to test Mexico's resolve, stinging the palms of Guillermo Ochoa with a rasping first-time strike.

Not to be outdone, Cho was at his best soon after, South Korea's goalkeeper lunging to his right to tip Hernandez's goal-bound shot wide.

Hernandez would not be denied again, though, the West Ham striker making no mistake in drilling in his landmark goal to send the raucous Mexican crowd into raptures.

Son's sublime 20-yard strike into the top-left corner punctured Mexico's defence in the third minute of stoppage time, but it would prove little more than a consolation as South Korea slumped to a second successive defeat.

Neymar: Not everyone knows what I went through