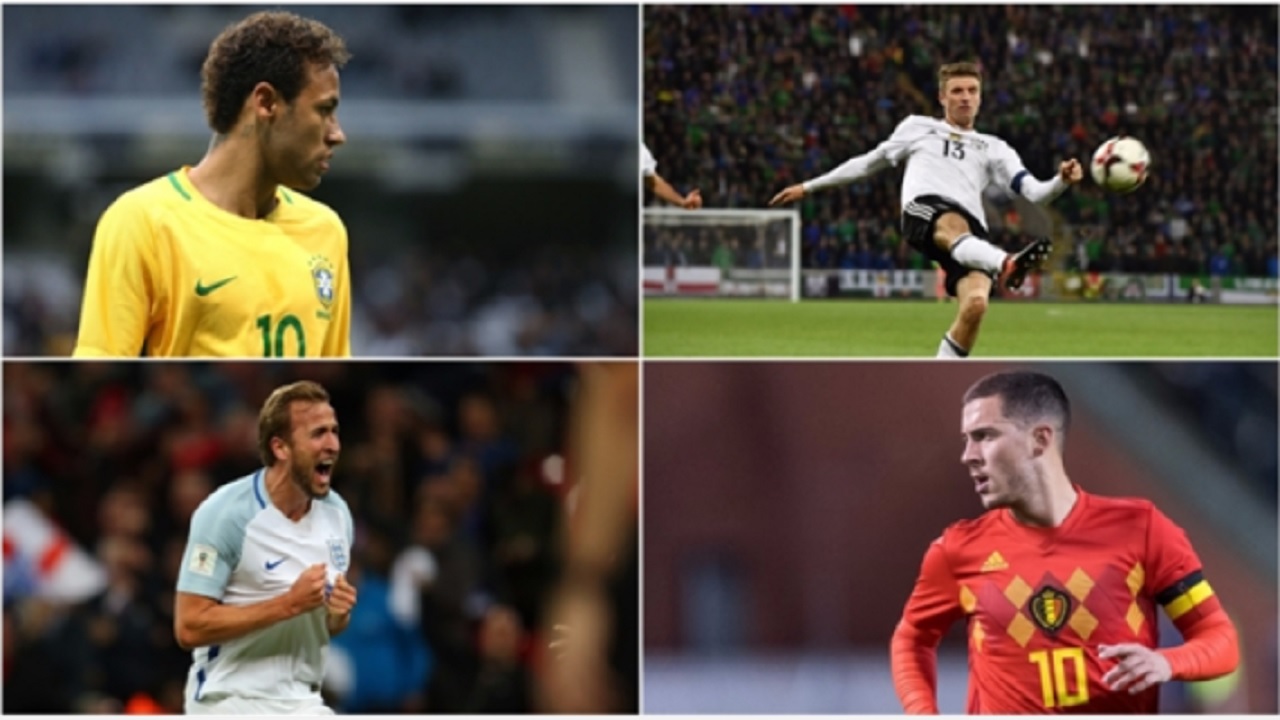 The countdown to the 21st World Cup can now well and truly begin following Friday's group-stage draw in Moscow.

All 32 teams learned their fate for next year's finals in Russia, and one from those nations will enter football history on July 15 when the final will be contested at the Luzhniki Stadium.

Before we get that far, though, the pool stages must be contested and – with the help of Opta data – we have analysed groups E-H.

Brazil are the great entertainers and the most successful team in the history of the competition with five victories. A 7-1 humiliation to Germany in 2014 ended their hopes of home success. But Brazil, the only team to have qualified for every finals, coasted through qualifying and many fancy them to win a sixth World Cup.

Neymar was involved in five of Brazil's 11 goals at the last finals, with a fractured vertebra ending his competition prematurely.

Switzerland boast the honour of being the only team to have not conceded a single goal in a World Cup tournament (2006), but – despite only losing once in qualifying – needed a play-off to reach Russia. Only once have Switzerland topped their group, while the last time they reached the quarter-finals was 1954. Costa Rica upset the odds to get out a pool including Italy, Uruguay and England in 2014 and were just one of three sides (penalty shoot-outs excluded) to not lose a match. Serbia are appearing as an independent nation for the second time.

The pressure is on Germany to end the run of defending champions exiting the next tournament at the group stages, with Italy and Spain doing so in 2010 and 2014.

Die Mannschaft's victory four years ago means only Brazil have more World Cup wins than their tally of four. Germany will fancy their chances of adding to a statistic that has seen them finish as the competition's top scorers in the past three editions.

Among current players, Thomas Muller is the highest World Cup scorer with 10. Sweden were runners-up when hosts of the tournament in 1958 and have not lost a group match since 1990. Sweden last faced Germany in the World Cup in 2006, where they were beaten 2-0 by the hosts.

Only four teams have made more World Cup appearances than Mexico, but they boast an unenviable record of having been knocked out of the last 16 in each of the last six World Cups. South Korea's 10 appearances is more than any other Asian nation and they have not missed out since 1986. However, only one of their past 10 World Cup matches has ended in victory.

England's greatest hour came at their home tournament in 1966, but since Bobby Moore lofted the Jules Rimet trophy into the air the Three Lions have progressed past the last eight just once in 1990 – a finals where they beat Belgium.

Recent World Cups have been particularly disappointing, with England winning just one of their past eight matches. Gareth Southgate's men conceded just three goals in qualifying, though, a joint-best with Spain in European qualifiers.

Belgium are living through a so-called "Golden Generation" with the likes of Eden Hazard and Romelu Lukaku among Roberto Martinez's ranks, and they were the first European nation – other than the hosts who appear automatically - to qualify for Russia. But their best performance remains a run to the last eight in 2014, where Kevin De Bruyne had a hand in 50 per cent of Belgium's goals.

It is hard to look past England and Belgium getting out of the group, but that will not stop tournament-debutants Panama from dreaming big. Incredibly, Panama reached Russia with a negative goal difference (-1), while no player scored more than twice for them in the CONCACAF section. Tunisia are back for a fifth time, and first since 2006, but have not won since triumphing in their first-ever match in June 1978 – a defeat to England in the '98 group stages included.

On paper, Group H looks the weakest of the pools so it is seemingly all to play for to reach the knockout stages.

Poland are the highest ranked of the nations in the group, and Robert Lewandowski will be key to their hopes after the Bayern Munich striker top scored in European qualifying with 16. You have to go back to 1986 for the last time they advanced from the group stages, but Colombia made it to the last eight in 2014 – where James Rodriguez shone to win the Golden Boot.

Do not expect to see many draws involving Colombia, with none of their 18 matches ending goalless. Senegal lit up the 2002 World Cup, where they memorably beat then defending champions France in the group stages before reaching the last eight. That is their only tournament appearance to date, though. Japan are playing for a sixth time, and have alternated going out in the group stages and the last 16 – if the pattern continues they will make the knockout stages. But to do so, they will likely have to improve of a record of two wins in their past 11 World Cup matches.

World Cup 2018: Southgate warns against writing off Tunisia and Panama