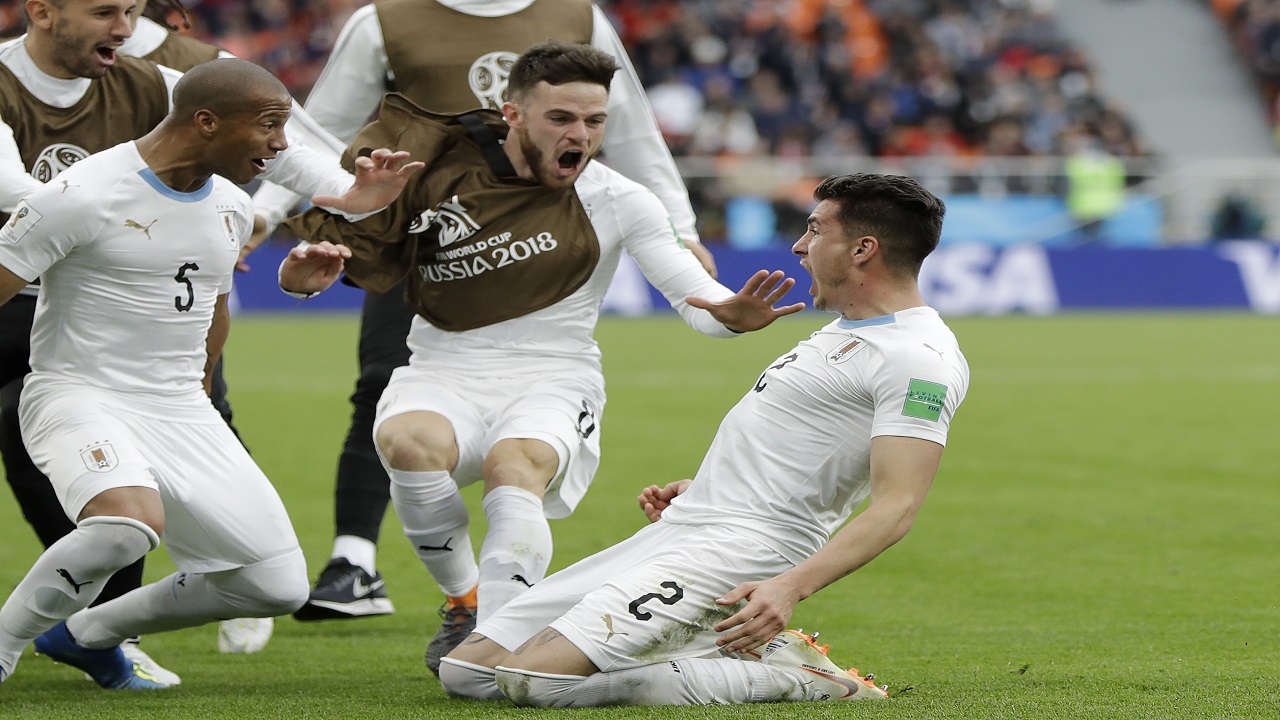 Uruguay's Jose Gimenez, right, celebrates with his teammates after scoring his side's opening goal during the group A match against Egypt at the 2018 football World Cup in the Yekaterinburg Arena in Yekaterinburg, Russia, Friday, June 15, 2018. (AP Photo/Natacha Pisarenko)

Jose Gimenez spared the blushes of Uruguay's all-star forwards with a 90th-minute winner to see off Egypt 1-0 in their World Cup opener on Friday.

Luis Suarez and Edinson Cavani each passed up opportunities to clinch the points against a Pharaohs side who kept Mohamed Salah on the bench, but it was centre-back Gimenez who proved the hero.

After the excitement of Group A rivals Russia's goal frenzy a day earlier, there was a serious lack of invention on show in Ekaterinburg.

Suarez missed two golden chances as goalkeeper Mohamed El-Shenawy excelled, before Cavani struck the post with a late free-kick, seemingly sealing a point for Egypt on their return to the finals.

But Gimenez rose highest to meet a set-piece and bury a header past El-Shenawy, celebrating a fine end to a week in which he signed a new contract at Atletico Madrid.

Egypt offered little in Salah's absence and are now under pressure heading into a clash with Russia, while Uruguay - and particularly Suarez - can breathe a sigh of relief.

With Salah – who has been battling a shoulder injury – watching on from the sidelines, Egypt's approach was largely compact and somewhat rugged and the first chance came as Cavani worked El-Shenawy from 20 yards.

Suarez should have fired Uruguay in front at the midway point of the first half, but, when the ball dropped his way from a corner, he screwed a close-range effort into the side-netting.

Uruguay continued to labour in the attacking third before the break, while a healthy Egyptian contingent had only Salah's appearance on the stadium's big screen to cheer.

Suarez and his team-mates were quickly back on the front foot following the restart, though, and Cavani fed his strike partner for a low drive that El-Shenawy blocked bravely.

The Barcelona forward squandered another opportunity late on, forcing his way through the Egypt backline but failing in his attempt to round the goalkeeper.

And El-Shenawy again looked to have preserved a point with a sublime save from Cavani's thunderous volley, before the Uruguay attacker curled a free-kick against the post.

But Gimenez came to the rescue as he planted a header into the bottom-right corner, earning a hard-fought victory.

- Uruguay have won their opening match at a World Cup tournament for the first time since 1970, when they beat Israel.

- This was Oscar Tabarez's 16th World Cup match in charge of Uruguay – only one manager has managed more matches for a South American country at the World Cup (Mario Zagallo for Brazil, 20 games).