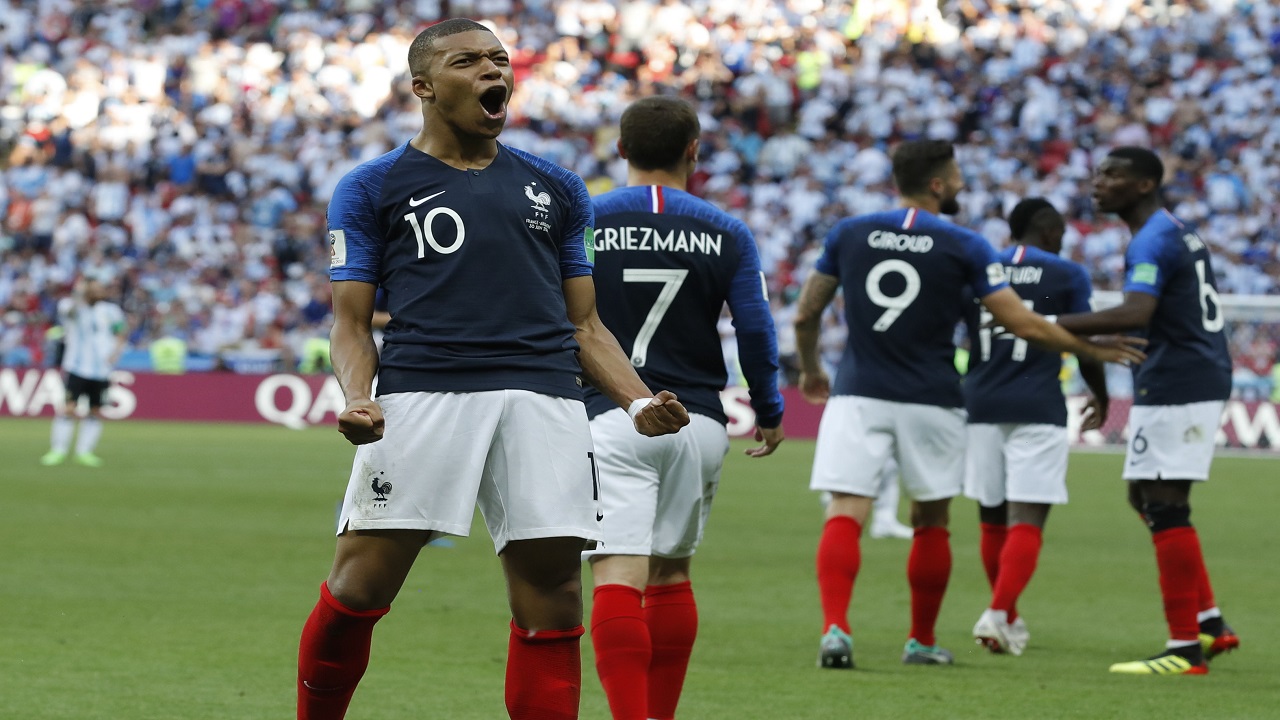 France's Kylian Mbappe celebrates after scoring his side's third goal during the round of 16 match against Argentina, at the 2018 football World Cup at the Kazan Arena in Kazan, Russia, Saturday, June 30, 2018. (AP Photo/David Vincent).

Kylian Mbappe upstaged Lionel Messi as France recorded a 4-3 win over Argentina in a topsy-turvy last-16 clash to open the knockout stages at the World Cup in Russia on Saturday.

Teenager Mbappe was in devastating form in the heavyweight clash, scoring two second-half goals to bring Argentina's Russia 2018 campaign to an end in Kazan.

The Paris Saint-Germain forward's surging 70-yard burst also led to the opening goal after 13 minutes, Antoine Griezmann slotting home from the penalty spot after Mbappe had been hauled down by Marcos Rojo in the area.

Yet Argentina turned the game around, Angel Di Maria's stunning long-range strike before the break followed by Gabriel Mercado's fortuitous effort early in the second half.

However, Benjamin Pavard scored a stunning equaliser in the 57th minute before Mbappe took centre stage with a quick-fire brace, securing Didier Deschamps' side a place in the quarter-finals, where they will play either Uruguay or Portugal.

Messi – whose international future will be a burning question in the aftermath of the defeat - did set up a late header for Sergio Aguero but it was not enough to save Argentina, with the beaten finalists from 2014 slipping out of this year’s tournament.

France, who made six changes from the side that drew 0-0 with Denmark last time out, were almost ahead after nine minutes, but Griezmann's wonderful 25-yard free-kick crashed back off Franco Armani's crossbar.

The Atletico Madrid striker did not have to wait long to open the scoring, though - largely thanks to the scintillating pace of Mbappe.

After picking the ball up 10 yards outside his own area, he set off on a sparkling run that was only halted when Rojo clumsily hauled him down just inside the area.

Griezmann stepped up and coolly converted from the spot, sending the ball low to Armani's right for his second goal - both penalties - at the tournament.

The South Americans had scarcely offered anything in the way of attacking threat during a tepid first half, yet drew level four minutes before the interval thanks to a moment of magic from Di Maria.

There looked to be little danger when he was fed the ball 30 yards out, but Di Maria unleashed a superb left-footed strike that flew beyond Hugo Lloris.

Argentina were a team reborn at the start of the second period and were duly rewarded with a second three minutes after the restart.

Ever Banega's free-kick was headed out towards Messi and the Barcelona star's whipped effort towards goal was inadvertently diverted past a helpless Lloris by the foot of Mercado.

That lead last just nine minutes as France pulled level with a goal of the highest quality.

Lucas Hernandez's cross from the left found his full-back partner Pavard, who sliced across his half-volley from outside the area, sending it into Armani's top-right corner.

Mbappe put France ahead again in the 64th minute when he picked up a loose ball in the area, found a yard of space and fired in low past Armani, who was slow getting down. His second – a first-time finish from Olivier Giroud’s pass - came just four minutes later, finally putting clear daylight between the teams.

Aguero set up a tense finale when he headed in from close range in the third minute of stoppage time, but it was not enough to prevent Argentina - and Messi - from crashing out.