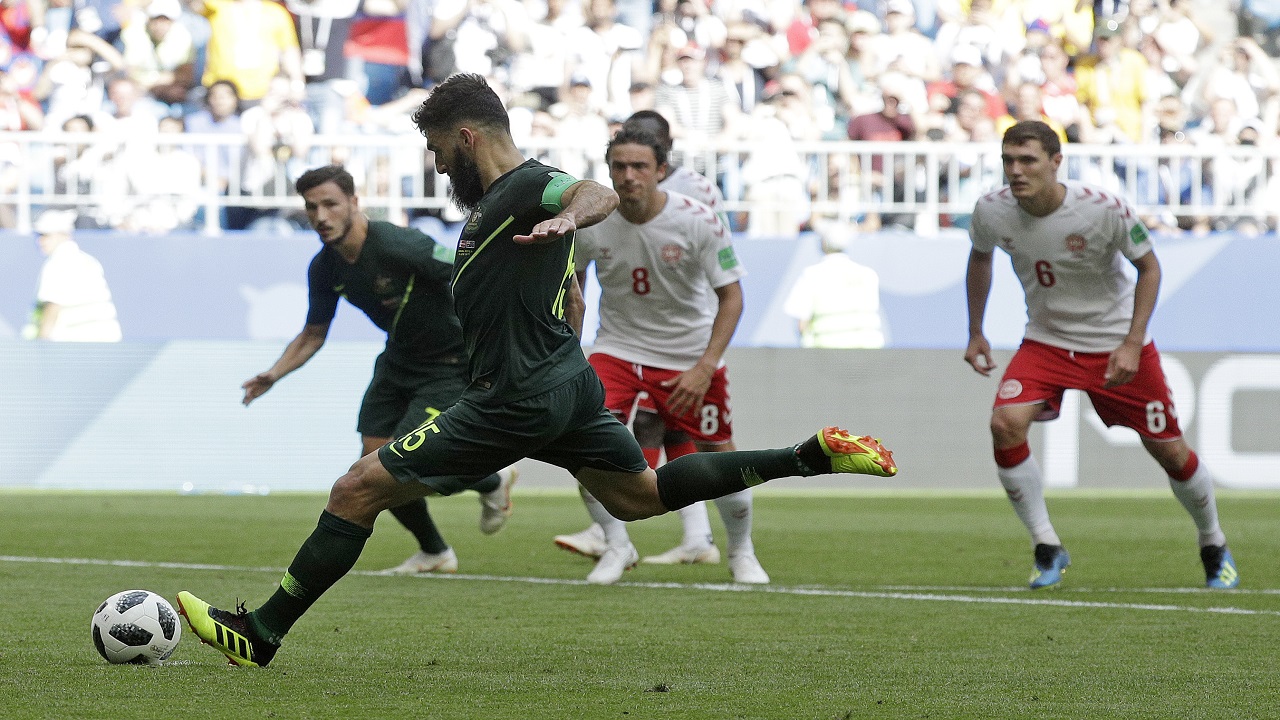 Australia's Mile Jedinak scores from the penalty spot during the group C match against Denmark at the 2018 football World Cup in the Samara Arena in Samara, Russia, Thursday, June 21, 2018. (AP Photo/Gregorio Borgia).

Mile Jedinak's second penalty of the World Cup in Russia earned Australia a precious 1-1 draw against Denmark after a controversial VAR decision led to Christian Eriksen's superb opener being cancelled out in Samara.

Denmark winger Yussuf Poulsen conceded his second penalty in as many games when video replays led to a decision of handball against him and Jedinak buried the ensuing spot-kick to earn Australia their first point of the tournament.

Bert van Marwijk's side had to grind out a draw against a Denmark side who showed flashes of brilliance, none better than Christian Eriksen's seventh-minute opener.

The Tottenham playmaker defied Denmark's reputation as a goal-shy outfit, applying a wonderfully crisp finish to a swift passing move that was reminiscent of the great Danish side of the 1980s.

But Poulsen's apparent handball means he will miss Denmark's final Group C game against France, having picked up two yellow cards in two games, and Age Hareide's men need a point from that game to make sure of their place in the knockout stage.

Nothing short of victory will do for Australia when they take on Peru, and they can't afford to rely on decisions going their way as they did here.

The Danes took 27 minutes to register a shot in their Group C opener against Peru but Thomas Delaney headed wide from Pione Sisto's cross after just two minutes against Australia.

At the other end, Mathew Leckie rose above the Danish defence to head a corner over the bar but Denmark countered and Nicolai Jorgensen's elegant ball control and lay-off afforded Eriksen the chance to hit the cleanest of half-volleys over Mat Ryan and into the top of the net.

Australia ventured forward tentatively, never achieving the kind of intuitive flow that had been their undoing, whereas Denmark went close to doubling their lead when Sisto tested Ryan with a 20-yard drive and again when Jorgensen flashed a close-range header just wide.

The game was going Denmark's way until the 35th minute when referee Antonio Miguel Mateu Lahoz consulted VAR and decided Poulsen used his arm to block Leckie's headed shot and awarded the penalty, which Jedinak drilled into the bottom right corner of the net.

Poulsen had a penalty claim of his own waved away early in the second half after he tumbled to the ground on his way into the Australia box and there were nervy moments for Denmark when Kasper Schmeichel failed to collect a looping long ball before Leckie flashed the ball across the face of goal.

Van Marwijk sent on the tournament's youngest player, Daniel Arzani, with just over 20 minutes left to play and he teed up Aaron Mooy for a fizzing shot that flew just over the top right corner of Schmeichel's goal from outside the box.

Socceroos striker Andrew Nabbout left the field with a dislocated shoulder and was replaced by Tomi Juric, who contributed to a good spell of late Australia pressure, but Denmark's well organised defence held firm as they earned a point that gives them one foot in the last 16.

- This was the fourth time that Denmark and Australia have met, but the first time they have drawn (2 wins for Denmark, 1 for Australia).
- Australia have failed to win any of their last five World Cup matches (D1 L4), their joint-longest winless run in the competition.
- Jedinak's penalty for Australia ended a run of nine hours and 31 minutes without conceding at international level for Denmark's goalkeeper Kasper Schmeichel (571 minutes).
- Eriksen's opener for Denmark (06:08) was their earliest goal at a World Cup since July 1998, when Martin Jorgensen (01:31) netted in the second minute against Brazil in the quarter-finals.