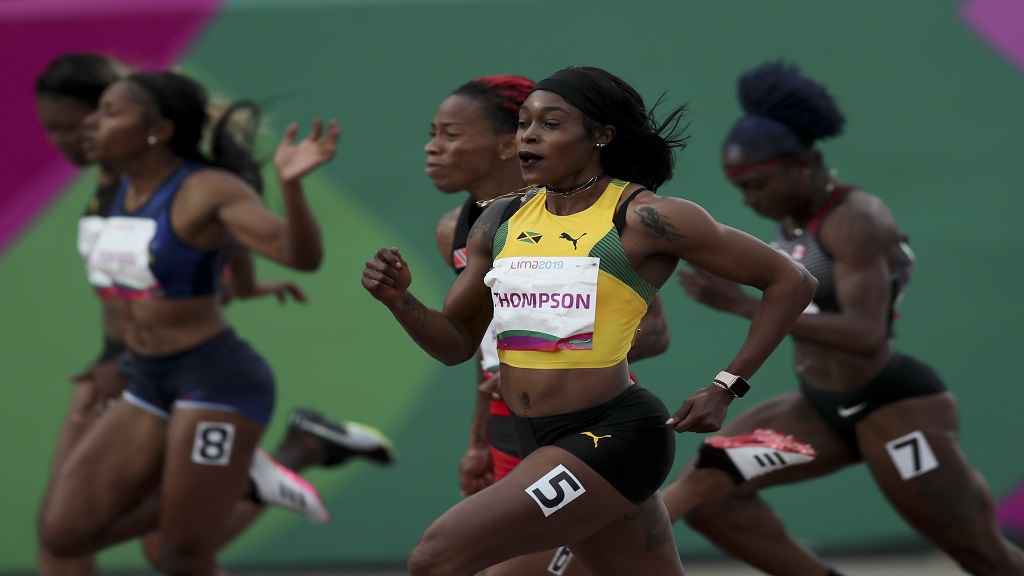 Elaine Thompson of Jamaica competes in the women's 100m at the recent Pan American Games in Lima, Peru.

The 2019 IAAF World Athletics Championships in Doha, Qatar, are fast approaching and with just another seven days to go before the action begins, Loop Sports will roll out previews of events that Jamaica will be involved in.

For neutral observers – and of course the home crowd – the men’s 4x100m final was one of the highlights of the IAAF World Championships held two years ago in London’s Olympic stadium, as Nethaneel Mitchell-Blake anchored the home quartet to a surprise gold ahead of the United States.

It was a spectacle that was all the more unforgettable for the fact that, halfway down the finishing straight, in what was his last race, Jamaica’s living legend Usain Bolt had come to grief.

It would be nice to think that the men’s 4x100m at the IAAF World Athletics Championships Doha 2019 will match that for drama.

Of course, there’s no more of Bolt. But his perennial rival Justin Gatlin, 37, will be there again for the United States – keen, no doubt, to replace the 2017 relay silver with a 2019 gold. And with the likes of US champion and world leader Christian Coleman on their team, the United States look, as ever, redoubtable on paper.

Given the presence of the ever-dependable Mike Rodgers, and the electric talent of Noah Lyles, who has run 9.86 this season despite narrowing his attention to the 200m in Doha, there is the possibility of a super time. But will the chemistry be there? And, when it counts, will the baton? Let’s not forget that the US men’s sprint relay team was disqualified in both the 2015 world final and the following year’s Olympic final.

On the latter occasion in Rio, the demise of the US elevated Japan to an astonishing silver medal in an Asian record of 37.60 behind what turned out to be the last big Jamaican hurrah for Bolt. Of that excitable quartet, Yoshihide Kiryu and Aska Cambridge remain, supplemented by the talent of Hakim Sani Brown.

Japan has the second-fastest time of the season to their credit – 37.78 – set in following home the British quartet at the IAAF Diamond League meeting in London in July, as the home team won in 37.60.

Two of the four Brits who brought home world gold in 2017 – Adam Gemili and Mitchell-Blake – will be supplemented by national champion Ojie Edoburun, Zharnel Hughes, Miguel Francis and Richard Kilty.

The Dutch quartet also laid down a marker in London as they finished third in a national record of 37.99.

Brazil, too, could be a huge force in Doha given their audacious victory at the IAAF World Relays in Yokohama in May, when they beat the United States and Britain into second and third place as they came home in 38.05.

The Brazilians were fourth at the IAAF Diamond League meeting in London in 38.01, and they have three of their four World Relays winners in Doha – Rodrigo do Nascimento, Derick Silva and Paolo De Oliviera.

Turkey, with world 200m champion Ramil Guliyev and Jak Ali Harvey to the fore, will also be a force, having run 37.98 this season, and Canada – with Aaron Brown and the super-talented if fragile Andre De Grasse available – should not be ruled out.

How can it be we get this far without mentioning Jamaica? That proud sprinting nation is 13th on the list of 16 entered teams with a best of 38.51 set at the World Relays.

In the right circumstances, a team that can call upon the talents of 2011 world champion Yohan Blake, now back to fitness after a long injury torment, and world and Olympic 110m hurdles champion Omar McLeod, plus the smooth operator Julian Forte, should be capable of something eyebrow-raising. But will the circumstances occur?

The USA and Jamaica have ruled this event for the best part of a decade, but their dominance could be seriously challenged in Doha.

USA are the defending champions, but only two of their quartet from 2017 – Tori Bowie and Morolake Akinosun – form part of their relay pool in Doha. Bowie, the world 100m champion, is rounding into shape but is still some way off the form that landed her with the gold medal in London in 10.85.

In fact, the USA’s overall 100m depth this year isn’t as strong as it usually is. With a season’s best of 10.99, national champion Teahna Daniels is the fastest member of their team this year. And while all of the team members have considerable relay experience from their days in the collegiate ranks, the women named in the relay pool for Doha haven’t had many recent run-outs.

Akinosun, Deserea Bryant and Caitland Smith can take some confidence from their victory at The Match earlier this month, but their winning time of 43.36 won’t alarm the rest of the world’s top teams.

Jamaica’s squad is bolstered by double Olympic champion Elaine Thompson and multiple world and Olympic gold medallist Shelly-Ann Fraser-Pryce, both of whom have clocked 10.73 this year, but even that might not be enough to guarantee victory.

At the IAAF Diamond League meeting in London, Thompson and Fraser-Pryce teamed up with Natasha Morrison and Jonielle Smith – a near-full-strength squad based on current form – and won in 42.29, but finished just 0.01 ahead of a British team that was without two of their fastest and most experienced women: Dina Asher-Smith and Asha Philip.

Britain failed to finish in their heat at the IAAF World Relays Yokohama 2019, but that was a rare blip for a well-drilled team that in recent years has won European gold, Commonwealth gold, world silver and Olympic bronze.

European bronze medallists Germany will head to Doha as the world leaders in this event following their 41.67 victory at the recent ISTAF meeting in Berlin. Just two days prior, the same quartet – Lisa Marie Kwayie, Yasmin Kwadwo, Tatjana Pinto and Gina Luckenkemper – won in Zurich in 42.22.

In 2016, however, Germany went to Rio as the world leaders with 41.62 but was half a second down on that time in the Olympic final and had to settle for fourth place. Provided they haven’t peaked too soon, they should feature in the fight for medals.

Two-time world champion Dafne Schippers may be struggling with a back injury this year, but she still helped the Netherlands record a solid 42.28 to finish just 0.06 behind Germany in Zurich last month. If the European silver medallists can get close to their national record of 42.04, it might just be enough for a medal.

The last time China reached the women’s 4x100m final at a global championships was the 2000 Olympic Games, but their chances this year appear stronger than they ever have been.

Aside from an uncharacteristic slip-up at the World Relays, their leading quartet – Liang Xiaojing, Wei Yongli, Kong Lingwei, and Ge Manqi – has gone from strength to strength this year. They won the Asian title in Doha, finished in the top three at the IAAF Diamond League meetings in Lausanne, London, and Zurich, and then placed second in Berlin in 42.31, the second-fastest time ever by a Chinese team.

Switzerland, fifth in London two years ago, is the only other team this year to have bettered 43 seconds and should, barring disaster, at least reach the final.

But as ever with the relays, expect the unexpected.

Allyson Felix named to US 4x400 relay pool for worlds