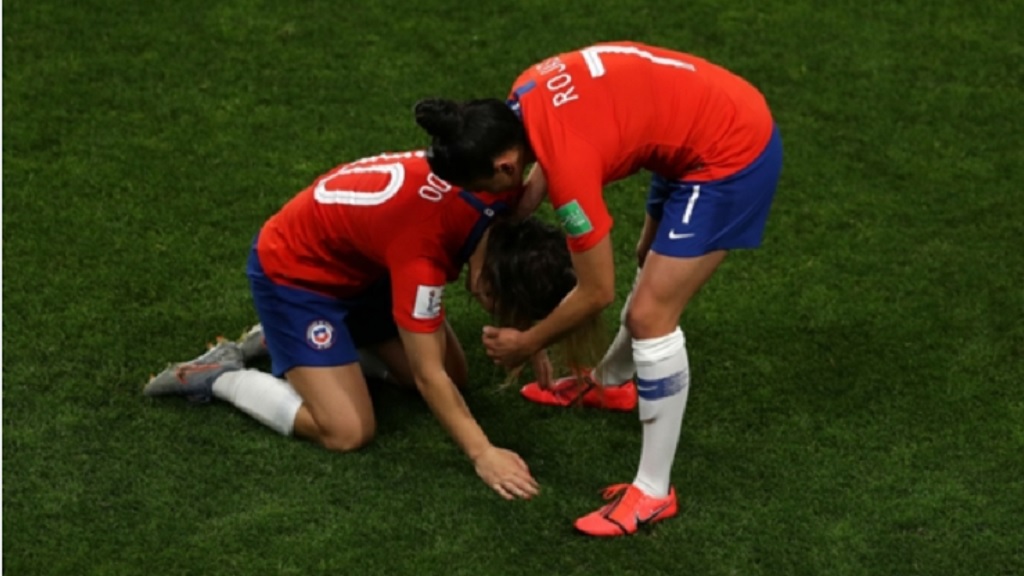 Chile players are devastated by their World Cup exit.

Thursday's action saw the group stage come to a dramatic conclusion as Chile bowed out despite a 2-0 win over Thailand.

Needing victory by three goals to advance from Group F as one of the four best third-placed teams, La Roja led through Waraporn Boonsing's own goal and Maria Jose Urrutia's header.

Goalkeeper Boonsing then fouled the Chile striker in the box, but Lara's 86th-minute spot-kick thudded against the crossbar as the World Cup debutants were dumped out, with several players in tears at the final whistle.

The result meant Nigeria – who finished third in Group A – moved into the knockout rounds, where they will be joined by Cameroon, dramatic 2-1 victors over New Zealand in Group E.

Ajara Nchout's opener was cancelled out by Aurelle Awona's desperate own goal, but Nchout secured a last-16 berth with a fine finish in the 95th minute.

The other match in Group E saw Netherlands secure top spot as Anouk Dekker and Lineth Beerensteyn netted either side of Christine Sinclair's leveller to seal a 2-1 win over Canada.

Defending champions the United States matched Netherlands in advancing with a perfect record from Group F as Lindsey Horan's strike after 160 seconds – the fastest goal of the tournament – was added to by Jonna Andersson's own goal in a 2-0 victory over Sweden.

The misfortunes of Awona, Andersson and Boonsing on Thursday mean that own goals top the World Cup scoring charts after the group stage, three clear of USA's Alex Morgan and Australia's Sam Kerr.