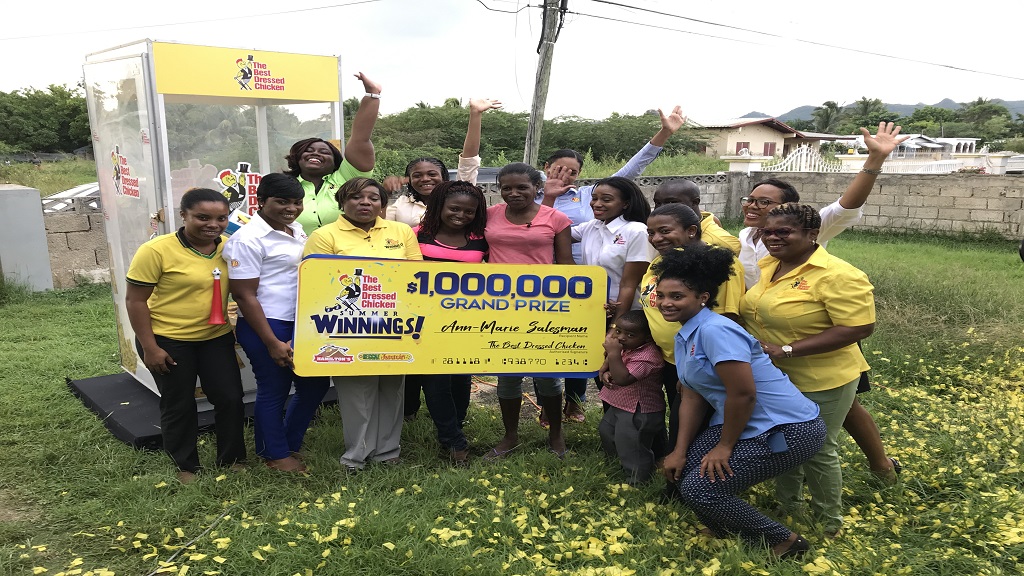 Ann-Marie Sailsman and her daughter (centre) pose with representatives of the Best Dressed Chicken after Sailsman was presented with $1 million as the grand prize winner in the company's Summer Winnings Promotion last Thursday.

A 52-year-old woman from Spanish Town, St Catherine was on Thursday presented with $1 million in cash after being selected the grand prize winner in the 'Best Dressed Chicken Summer Promotion'.

Ann-Marie Sailsman, a resident of Strathmore Gardens, got the surprise of her life when members of the Best Dressed Chicken team visited her at home.

The team met with Sailsman and while interviewing her, even teased her for a few minutes, telling her that she had only won a weekly prize of a tablet.

She was also told that as a consolation, she had an opportunity to grab up to $150,000 in a money machine.

Sailsman was placed in the machine and told to grab as much cash as she could.

After the allotted time and grab, members of the Best Dressed team would later reveal the big news.

Sailsman was told that she did not really win a tablet, but instead, the grand prize.

The occasion brought a high levels of celebration in the community, as Sailsman was joined by family and friends in the festivities.

“I have never won anything in my life, I am so elated,” Sailsman told a member of the Loop News team who was in the community to capture the occasion.

She explained that it was in November of this year that she went to a store in Spanish Town with her daughter, and purchased a pack of sausage.

“I bought the Reggae Jammin franks and it was my daughter who saw a green coupon and told me to enter,” said Sailsman, hugging her daughter.

She said soon after the purchase she received a call. When that happened, she was told that she had won a tablet. The surprise went up quite a notch when she was told that it was not the tablet, but instead, $1 million.

“So this promotion is our ‘Summer Winnings Promotion’ which started in May and it actually ended in October, so Mrs Sailsman is actually our last winner for October,” said Lorraine Kemble, Brand Manager for the Best Dressed Chicken.

“One of the major prizes is a grand prize of $1 million. We do have weekly prizes ranging from tablets to bicycles to grocery vouchers, to even $30, 000,” added Kemble.

“Persons have been winning multiple times and it’s very simple to enter,” she further explained.

“You just go into the supermarket and you purchase the products, or even at the wholesale. As a matter of fact, the products each have a coupon inside, and the coupon has a number on it, so it’s a code that you text in to a number, and you basically text it in and you sit back and wait, and persons are randomly selected every week," Kemble indicated.

She said those persons who won weekly prizes do go back in for a chance at the grand draw.

Kemble said the response to the promotion was overwhelming.

“It has been overwhelming. We have been doing this promotion for two years running. This is the first time that we are doing cash prizes. Before we did motor vehicles, so we gave away a Hyundai Tucson and we have given away a Rav4 before.

“This time around we did a focus group to find out what it is that persons wanted, and it was revealed that they really would have liked the cash, the opportunity to do what they want to do with the money, rather than winning the vehicles," said Kemble

"So far we have gotten a database of over 500,000 customers, and it continues to grow.

We are now entering into our Christmas promotion phase and we will be giving away another $1 million at the end of January 2019," Kemble said.