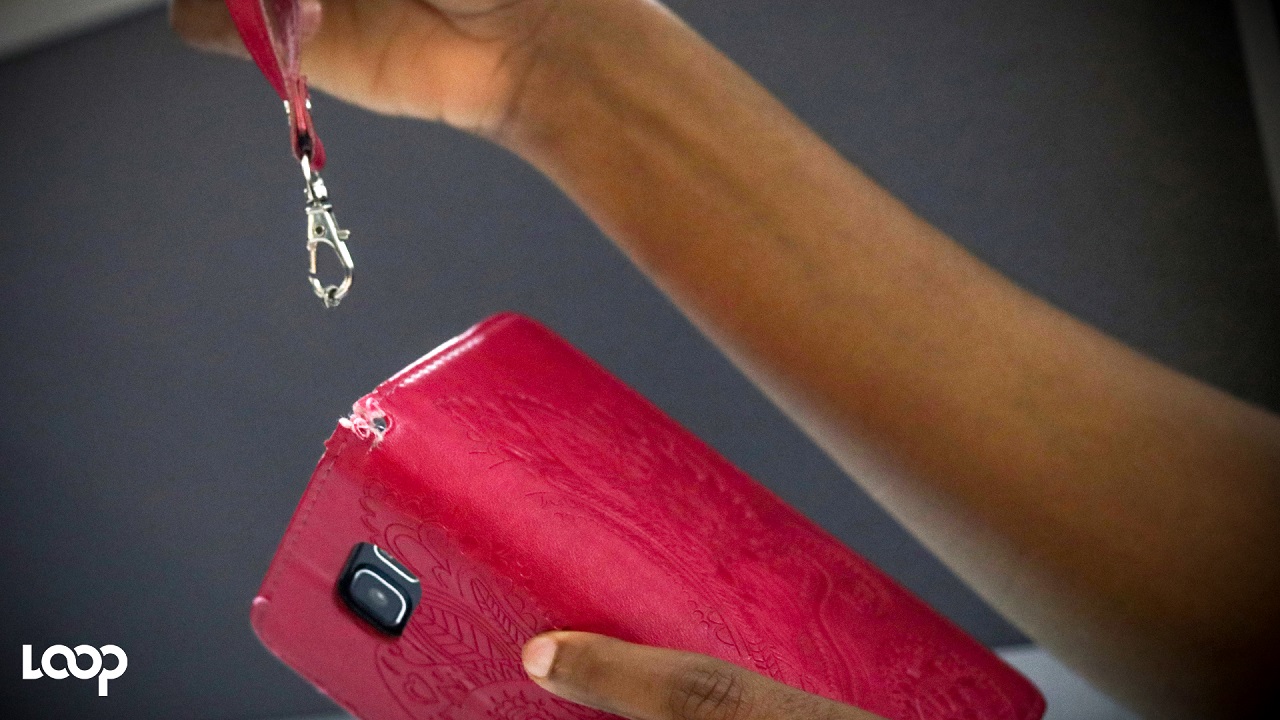 The stolen and subsequently recovered phone

A woman who was robbed of her cell phone which was yanked from one of her hands on Thursday in the busy downtown Kingston shopping district, pursued the thief and with some help, managed to retrieve the phone.

Arising from the incident, the woman, in an interview, sought to caution shoppers to be vigilant and, if possible, leave their phones behind while in the area.

In sharing what she said was a pretty scary experience, the woman said that standing her ground, with the support of a single person in the area, proved to be quite a learning experience.

The woman said she was in the shopping district trying to stock up on goods for her small business, and had her cell phone in her hand as she walked down Princess Street.

About 50 metres from her shopping destination, she said she was suddenly pounced upon by a male, about six feet tall with discoloured skin and a twisted hairstyle, almost resembling dreadlocks.

“I was caught off guard and he said, 'gimmi dis!'” said the woman in recalling the incident which was still fresh in her mind.

She said a struggle ensued, during which she refused to loosen her grip on her Samsung smartphone, which was in a case.

But during the struggle, a clip on the phone case broke loose and the phone fell cleanly into the hands of the thief, who quickly took off up Princess Street.

But the encounter was not over.

“I was not prepared to have my phone go like that, so I went after him,” said the victim, who quickly indicated that her move came from a split-second decision.

She said while chasing the man, she was assisted by a female vendor who was selling on the sidewalk, who had seemingly witnessed the entire episode up to that point.

The helpful move caused the thief to fall and land heavily on the sidewalk, with the phone falling under the vendor’s stall and virtually waiting for her arrival at that point.

The woman said the thief then quickly pulled himself together and continued making his way up the street.

“I am very grateful to woman, as there were others who saw the ordeal and did nothing to help,” said the woman.

She cited the vendor's action as being indicative of how groups of citizens can stand their ground against criminals and criminality.

“We need more people in the society who will not turn a blind eye to such matters,” said the woman.

Though admitting to have been shaken up by the experience, she said she did not let the incident deter her from purchasing her goods and continuing on her day as planned.

“I was shaken, but I had come to shop, and that’s what I did. I don’t believe in dwelling in the negative, so I found the vendor’s actions to be the highlight of the situation, and focused on that as the take-home message,” she said.

Handcart operators being targeted by robbers in downtown Kingston