Wolmer’s Prep on board with TTJ development programme 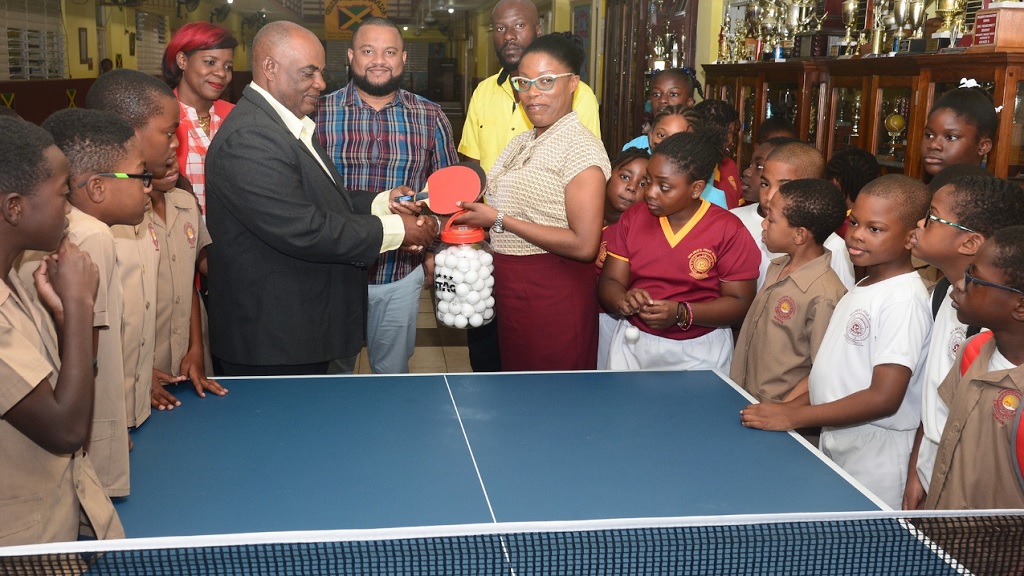 Godfrey Lothian, President, Table Tennis Jamaica, makes a presentation of table tennis rackets, balls and a table to Janet Howard, Principal, Wolmer’s Preparatory School at the institution on Monday, March 4, 2019. Along with curious students, others looking on (from left) are PTA President Lisa Reynolds, Board Chairman Ryan Foster and coach Raymond Leveridge.

Wolmer’s Prep became the latest addition to Table Tennis Jamaica (TTJ) platform of development with infrastructural benefit in the form of a table tennis board, rackets, and balls.

The presentation was made by Godfrey Lothian, TTJ’s President on Monday.

“So today is very important to Table Tennis Jamaica because what it does, it fulfills our mandate to start at an early age,” added Lothian. “Santoshi Takashima, the Japanese coach who was here, he told us that we’re starting too late, we need to start at five-year-old. Wolmer’s Prep has young kids, kids who can learn the different rudiments of the game from early, and that is what it’s about.”

Janet Howard, Principal of Wolmer's Prep, welcomed the presentation, noting it will enable their long-held desire of introducing the sport to their students.

Howard continued: “At Wolmer’s Prep we believe in the total child. Sports in one way, even with the NSC; having the four C’s – Creativity, Critical thinking, Collaboration, and Communication, sports is one way of getting them involved and doing all of that to excel academically.

The equipment comes by virtue of a partnership between TTJ and Indian company Stag and Lothian pointed out that their donations have now reached the 400 mark.

“We signed a four-year agreement with Stag International in India. I got the privilege to be in Germany in 2017, where I signed this agreement for four years so every year we’ll be getting a certain amount of equipment, including tables, balls, rackets, gear and so on. So we’ll be making donations from time to time to the schools and to the different institutions that play table tennis,” shared Lothian.

He added: “To date, from 2013 we’ve made some 400 presentations to clubs, schools, communities, churches and business places across the country and we’ll continue in this vein, that is one of our mandates."