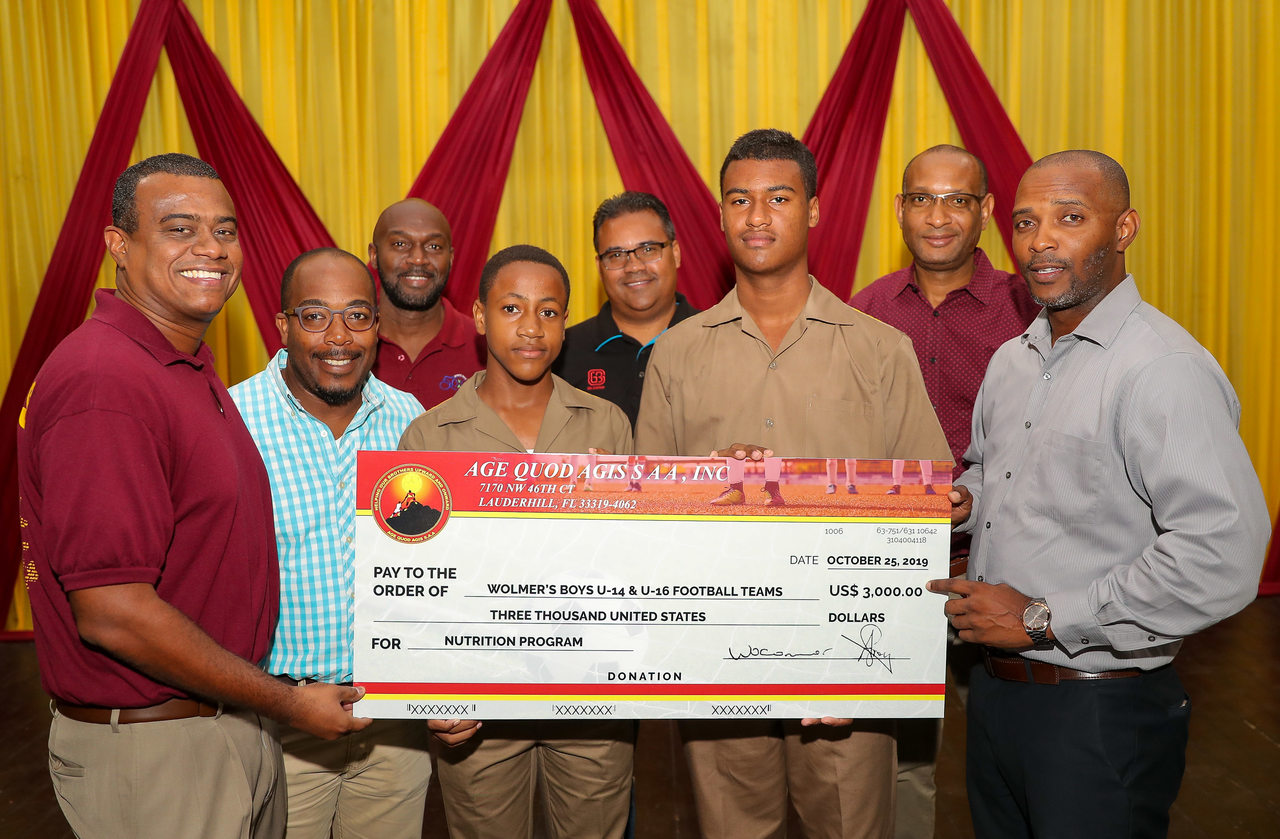 Members of the Wolmer’s Boys School under-14 and under-16 football teams pose with the symbolic cheque of US$3,000 from Wolmer’s old boys from the Age Quod Agis Sports Alumni Association (SAA).

A group of past students of Wolmer’s Boys’ School recently donated US$3,000 ($405,000) towards the school’s nutrition programme for the under-14 and under-16 football teams.

The donation from the Age Quod Agis Sports Alumni Association (SAA), is the eight such injection of funding into the programme by the association, and takes its total financial support to date to just under $3 million.

Making the presentation during the school’s general assembly and speaking on behalf of the association, president and founder, Andre Gray, expressed the group’s delight at being able to give back to their alma mater. The group is comprised of old boys who graduated from the institution between 1985 and 1990.

“The junior programme holds a special place in our hearts as it played an instrumental role in our lives while we were student footballers here, and we want to ensure that the current student footballers are afforded even greater opportunities to excel academically as well keep Wolmer’s on top in football and all other sports that we participate in,” Gray said.

In responding to the donation, Director of Sports, Damion Howell expressed gratitude to the old boys for their continued support of the sports department and the junior programme, noting that the contribution will go a far way in bolstering the strength of the programme, specifically for the U-14 and U-16 teams.

The SAA’s main focus is on donating much-needed funds and equipment to the sports department, with specific emphasis on the junior programme given their belief that it is important to develop and groom the talent, skills and relevant disciplines from that early stage.

The association’s main fundraiser over the years has been its annual reunion weekend, staged in September in South Florida and featuring football matches, with the main feature being the Wolmer’s vs Campion over-40s match, which is followed by an after party.

This year’s reunion, under the distinguished patronage of the Consul General of Jamaica, Miami, Oliver Mair, also included the  Wolmer’s 1994 Manning Cup and Olivier Shield champions in commemoration of their 25th anniversary.

The event attracted over 350 patrons including SAA members from Jamaica, US, Canada and the UK.

Wolmer's Boys' class of 82 continues to give back