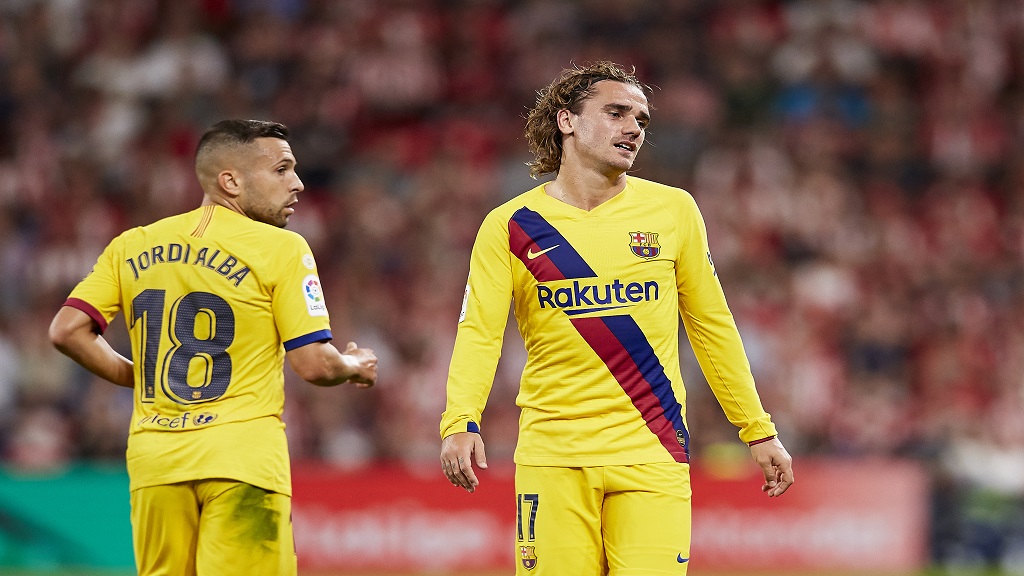 Barcelona lost their opening Spanish league match for the first time in a decade on Friday, falling at Athletic Bilbao 1-0 as Antoine Griezmann couldn't make up for Lionel Messi's absence.

Veteran striker Aritz Aduriz scored from a spectacular overhead kick a minute after coming off the bench in the 88th minute, handing Barcelona the loss after 10 straight opening league wins.

Griezmann, Barcelona's biggest offseason signing, was held scoreless in his competitive debut after joining from rival Atlético Madrid for 120 million euros ($133 million). It was a lackluster performance for the France forward whose only significant scoring chance came with a header in the final minutes.

"The ball didn't go in, and in the end that's what matters the most," Griezmann said. "We have to keep working hard to improve and to rebound as soon as possible."

Griezmann didn't have Messi by his side because the Argentina star is nursing a right calf injury, and he couldn't count on Luis Suárez either after the Uruguay striker had to be replaced in the first half because of an apparent muscle injury at San Mamés Stadium.

Philippe Coutinho couldn't play because of a pending move to Bayern Munich on a loan, but youngster Frenkie de Jong made his competitive debut with the Catalan club after joining from Ajax.

Barcelona had most of the significant chances, being denied by the woodwork a few times, including with a shot by Suárez just before he had to be replaced.

"We weren't ourselves," Barcelona defender Gerard Pique said. "It happens. We are coming off a preseason, we have a lot of new players in the team. This will be good for us going forward, it's better to lose now than in the end of the season."

The match seemed headed to a draw when the 38-year-old Aduriz, in his final season before retiring, came off the bench and scored with his amazing overhead kick from a right-flank cross by Ander Capa. The cross went over the Barcelona defenders and Aduriz reached high with his right foot to send the ball into the far corner and ignite the crowd of more than 47,000 at San Mamés.

"Football is so beautiful sometimes because of things like this. It gives you chances like this," said Aduriz, a former Spain international. "It will be impossible not to miss this. I'm just incredibly happy to be able to choose how I'm ending my career, and to be able to do it at the place that I love the most."

Barcelona's last setback in a Spanish league opener was in 2008, a 1-0 defeat at Numancia in Pep Guardiola's coaching debut with the Catalan club.

Real Madrid, trying to rebound from one of their worst seasons in the last decade, open at Celta Vigo on Saturday without new signing Eden Hazard because of a left thigh injury.

Messi given 3-month Argentina ban for accusing CONMEBOL of corruption