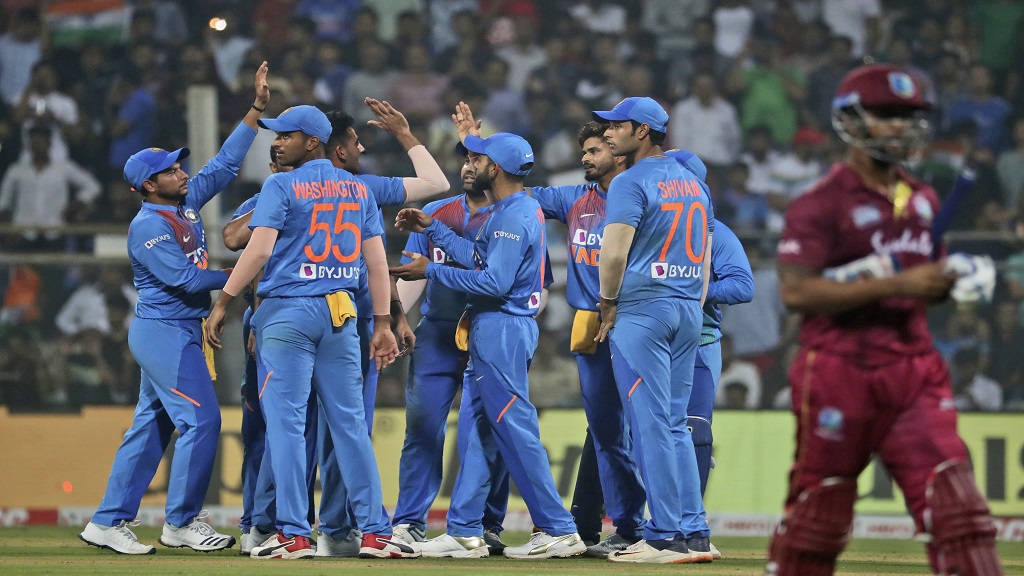 The tourists had kept their hopes alive with an eight-wicket victory in Thiruvananthapuram on Sunday.

However, the Windies' bowling attack had no answer at the Wankhede Stadium, India's big hitters delivering in emphatic fashion to seal the series.

Rohit (71) and Rahul (91) combined for a 135-run first-wicket partnership, the latter posting his third-highest score in T20 cricket, before Kohli carried India to 240-3 with an unbeaten 70.

West Indies wilted in reply, with Kieron Pollard's 68 in vain for a team that lost Evin Lewis to an injury suffered while fielding, the batsman taken off on a stretcher after hurting his knee.

Both India openers reached 50 in rapid fashion, Rohit doing so in 23 balls and Rahul in 29. Their remarkable start was ended in the 12th over when Rohit picked out Hayden Walsh in the deep.

Rishabh Pant went for a duck as he failed to make the most of his promotion to number three, but captain Kohli struck seven sixes to help extinguish any hope of a fightback from the Windies bowlers.

He accounted for 64 of the 95 runs compiled in a third-wicket stand with Rahul, who was denied a third T20 international century when he was caught behind attempting to hook a Sheldon Cottrell bouncer.

The Windies promptly fell to 17-3 inside the first four overs of their innings, but Shimron Hetmyer steadied the ship with a knock of 41 that saw him clear the rope five times.

Hetmyer succumbed to Kuldeep Yadav in unfortunate fashion, hitting a full loss straight to long on, and the spinner also accounted for Jason Holder 10 balls later.

Pollard raised the slight possibility of a tense finish by hitting 32 runs in 10 balls, but when he diverted a Bhuvneshwar Kumar short ball to deep midwicket, the writing was on the wall. They finished on 173-8, a long way shy of their target.

Attention now turns to a three-match ODI series, which starts on Sunday.