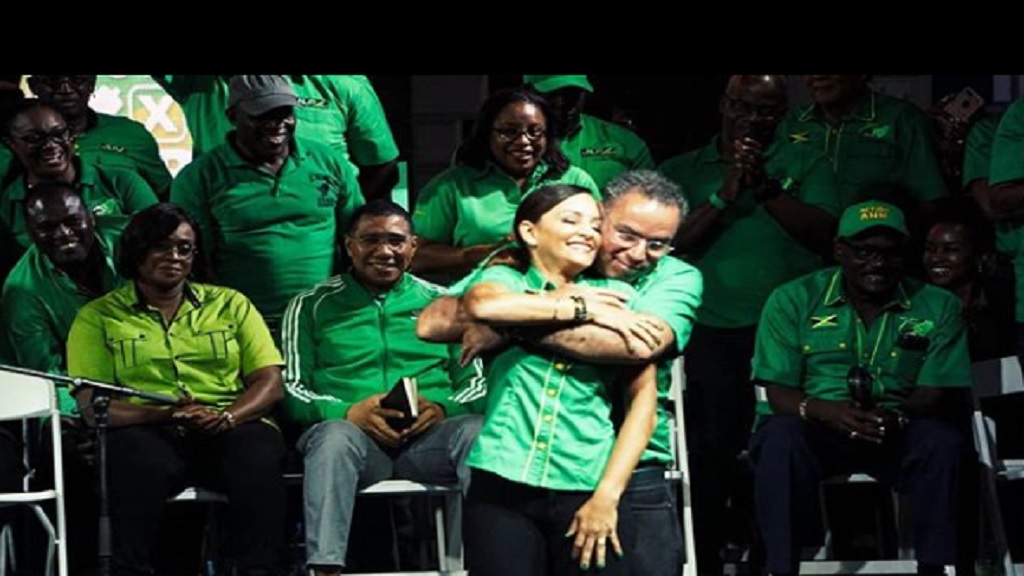 Ann-Marie Vaz and her 'Pums', husband Daryl Vaz, share a warm, public embrace on the political trail in East Portland recently. Looking on admiringly at left, (among others) is the wife and husband combination of Prime Minister Andrew Holness and wife, Juliet, both Members of Parliament (MPs) alongside Daryl Vaz. (Photo: Marlon Reid)

If the Jamaica Labour Party’s (JLP) Ann-Marie Vaz wins the April 4 by-election for East Portland, she would not only have taken a ‘safe’ People’s National  Party (PNP) seat, but would achieve the rarity of joining her husband in the House of Representatives.

Her husband is Daryl Vaz, the three-term Member of Parliament (MP) for the neighbouring West Portland constituency, and Minister without Portfolio in the Ministry of Economic Growth and Job Creation, which operates out of the Office of the Prime Minister (OPM).

When his wife won the East Rural St Andrew seat in the 2016 General Elections, the Holnesses created their own history, as it marked the first time a Jamaican prime minister was serving beside his/her spouse in Parliament. The prime minister is MP for West Central St Andrew, a seat he has held since 1997.

A search of the historical archives by the Loop News team revealed that serving in the Jamaican Parliament has often been - you guessed it - a family affair. Notable applicable family names Jamaica are the Gallimores, McNeills, Robinsons and also a father and later son Vaz representation. However, this article is focused on those family members who served in Parliament at the same time, as outlined below:

Dr Robertson and his wife, Karlene Kirlew-Robertson, entered Gordon House after PJ Patterson and the PNP won the 1993 General Elections. Dr Robertson would go on to serve as MP for South East St Catherine until 2007, when he retired from representational politics. On the other hand, Karlene, who had defeated the veteran Douglas Vaz, the father of Daryl Vaz, held the North East St Andrew seat for one term. She lost on her second attempt in the 1997 General Elections to the JLP’s Delroy Chuck, who has held the seat since then. Dr Robertson served in the Patterson Cabinet, while Kirlew-Robertson was an active member of the PNP Women’s Movement from the 1970s to the 1990s.

The brother team of Dr St Aubyn Bartlett and Edmund Bartlett served in the House together on the JLP side of the aisle. Senior brother, Edmund, first served in the House from 1980-1989 in Eastern St Andrew, the same seat St Aubyn would go on to represent from  2002 to 2011, when both served at the same time. Edmund has held the East Central St James seat since he re-entered the House in 2002. He has served under three JLP prime ministers - Edward Seaga from 1980 to 1989; in the Bruce Golding Administration of 2007-2011; and he currently serves as Tourism Minister in the Holness Administration.

The Peart brothers, who served on the PNP ticket, are from a political family. Their service, combined with that of their late father, Ernest, who they followed into representational politics, was over more than 60 years combined. 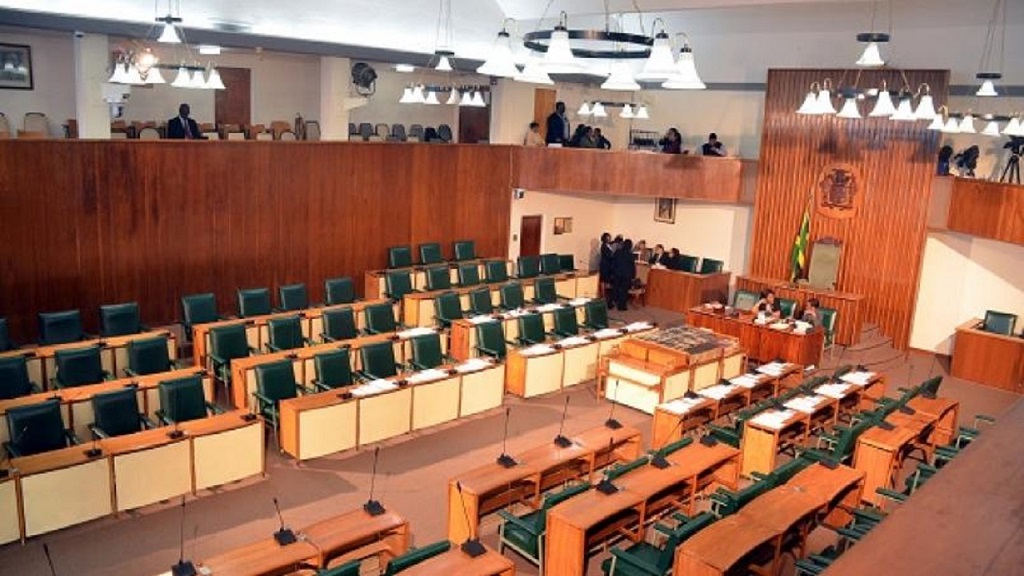 Gordon House, the seat of Parliament in Jamaica.

Opposition Leader, Dr Peter Philips, and his son, Mikhail, both presently serve in the House of Representatives. The elder Phillips has been MP for East Central St Andrew since 1994, while Mikhail is into his second term as MP for North West Manchester. He first won the seat in 2011.

As Minister of Finance and Planning from 2012 to 2016, he has been credited with having presided over the most fundamental positive reform of the Jamaican economy, the benefits of which are being seen now with the macro-economic numbers pointing in the right direction.

The father and son team which presently represents the JLP in Parliament, serves in the House and the Senate, respectively.

The senior Charles, known for his trademark half-black, half-white hairstyle, currently serves as Speaker of the House, while Charles junior serves as a senator and Minister of State in the Ministry of Foreign Affairs and Foreign Trade. He has expressed the hope of following his father into representational politics.

Charles Snr is one of Jamaica’s most colourful politicians. He among a number of JLP politicians who were detained in 1976 under a year-long state of emergency that was imposed by the Michael Manley Administration. Charles would go on to be one of the most popular Cabinet ministers in the Seaga Administration.

Former PNP Senator, Damion Crawford, is a nephew of JLP Senator, Ransford Braham. Crawford has resigned from the Senate to go up against Ann-Marie Vaz in the April 4 by-election for the East Portland seat in the Lower House.

Noel Arscott and Natalie Neita, both PNP representatives in the House, are cousins of former Prime Minister, Portia Simpson Miller. JLP MP, Everald Warmington, is also a cousin of the former prime minister. Simpson Miller certainly made it a cousin affair when she served in the House.

It should be noted that Jamaican families serving in politics is rooted in the founding of the country’s two main political parties. Norman Manley, one of the founding members of the PNP, was cousin to Sir Alexander Bustamante, the founder of the JLP.

Manley’s son, Michael, followed him into representational politics, becoming the country’s most charismatic and famous politician.

VIDEO: No limitation on a woman’s capacity – Ann-Marie Vaz