Williams warms up for doubles with singles win at Wimbledon 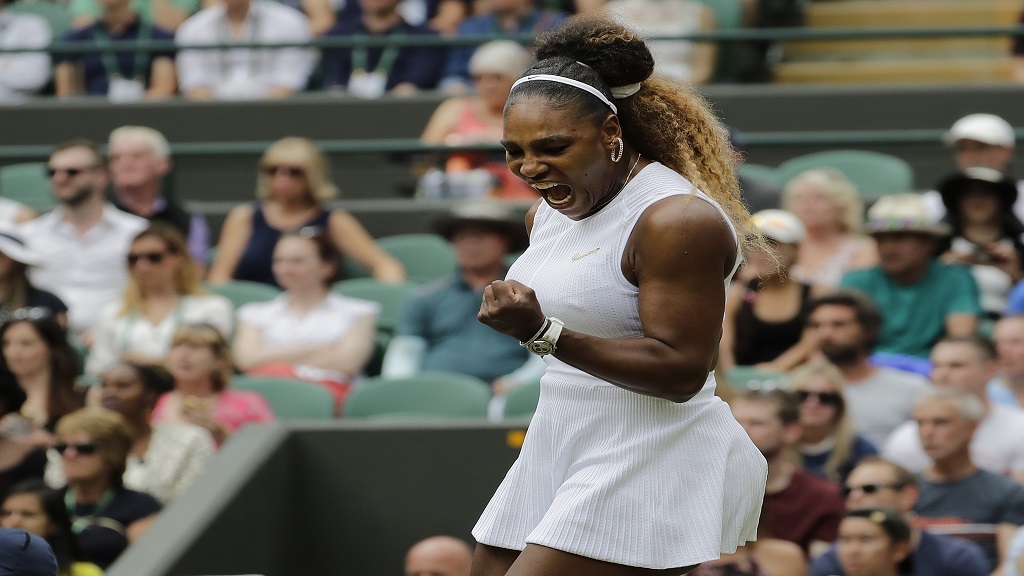 Serena Williams warmed up for her opening mixed doubles match at Wimbledon by reaching the fourth round in singles.

The seven-time singles champion, who is expected to play with partner Andy Murray later Saturday at the All England Club, beat Julia Goerges for the second year in a row, eliminating the 18th-seeded German 6-3, 6-4 on Saturday.

"I wanted to play mixed because I've played not even 15 matches, or just about 15 matches, so far this year," Williams said. "So I thought it could really help me."

Williams and Murray were supposed to debut as a team on Friday, but that was postponed. They likely will get on court later Saturday.

"There's such a buzz going around about me and Andy that I've gotten nervous now, I feel like I might have a little bit performance anxiety," Williams said. "I hope I can live up to the hype."

Williams beat Goerges in the semifinals last year before losing to Angelique Kerber in the final. She will next face No. 30 Carla Suarez Navarro, who made it to the fourth round at Wimbledon for the third time by beating unseeded American Lauren Davis 6-3, 6-3.

Top-ranked Ash Barty also made it through to the second week, winning her 15th straight match. The French Open champion beat Harriet Dart 6-1, 6-1 and will next face Alison Riske of the United States.

Two-time Wimbledon champion Petra Kvitova, who a week ago wasn't even sure if she could hold a racket in her left hand, reached the fourth round at the grass-court Grand Slam for the first time since her last title at the All England Club in 2014, beating Magda Linette 6-3, 6-2 on No. 2 Court.

Kvitova, seeded sixth, broke her opponent three times while never giving Linette a chance to break back even once.

The 29-year-old left-hander from the Czech Republic was attacked in her own home in 2016, needing surgery on her playing arm. She reached the Australian Open final at the beginning of this year but then pulled out of the French Open with an injured left forearm.

She only decided to play at Wimbledon at the last minute.

"So far it's OK," Kvitova said. "I'm really glad that I can play my game without any pain."

On Monday, Kvitova will face either 2017 U.S. Open champion Sloane Stephens or Johanna Konta, who reached the Wimbledon semifinals in 2017.

In the men's draw, No. 5 Kei Nishikori and 2017 Wimbledon semifinalist Sam Querrey both reached the fourth round.

Plenty of dramatics as Nadal tops Kyrgios at Wimbledon