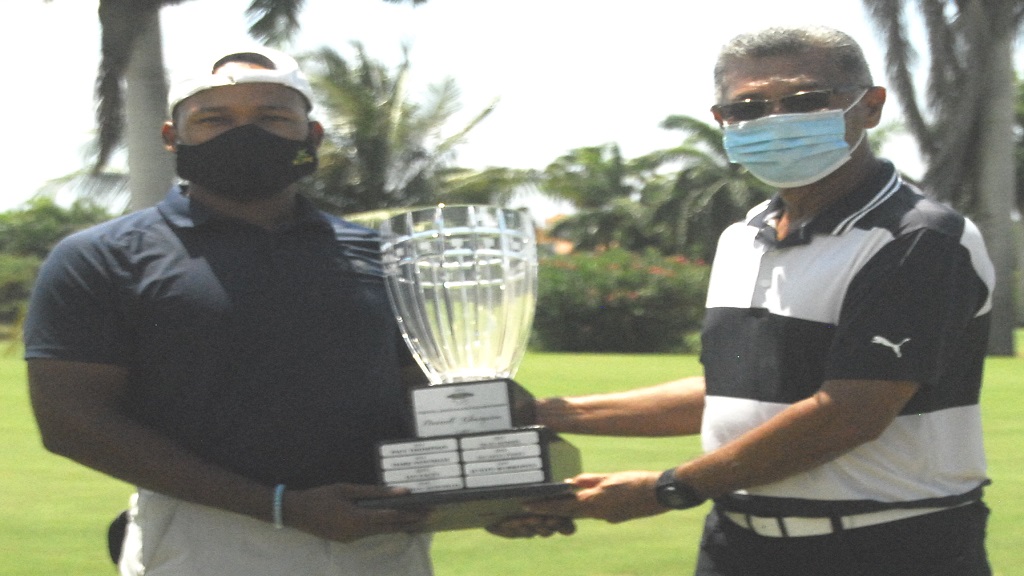 William Knibbs improved on his second place finish at last year’s Jamaica Golf Association National Amateur Golf Championship to claim the 2020 title at the Half Moon Golf course in Montego Bay on Sunday.

Knibbs, who was joint leader with National junior player Rocco Lopez on Friday’s opening day, carded the only under par score over the three days of competition. He shot one-under-par 71 on the very hot and humid final day for a three-round total of 218 after shooting 73 and 74 previously. He finished four strokes ahead of defending champion Justin Burrowes and day two sole leader Sebert Walker Jr, who were tied for second on 222.

Lopez was just one stroke behind in fourth place on 223.  He shot 75 on the final day.

“It is my first time winning the national championship.  The last three years I came second, twice in a play-off and once by one shot,” said Knibbs, who entered the final day in third position. “This is beyond anything in my wildest dreams.”

Burrowes said the condition on the final day proved too much for him.

“I gave it my best shot so I can’t really complain,” said the dethroned champion Burrowes.  “The conditions were pretty tough today.  It was very hot.  It was pretty windy at times and I just couldn’t get it going on the greens.  My putting wasn’t so great so it's hard to really shoot a good score if you are not making much puts,”  Burrowes futher added. He shot 76 on the final day.

Former national champion Sean Morris, who played with an injured finger, shot 80 and posted a three-day total score of 229.  The other challenger was Dr Mark Newnham who closed the tournament on 233 after shooting 79 on Sunday.