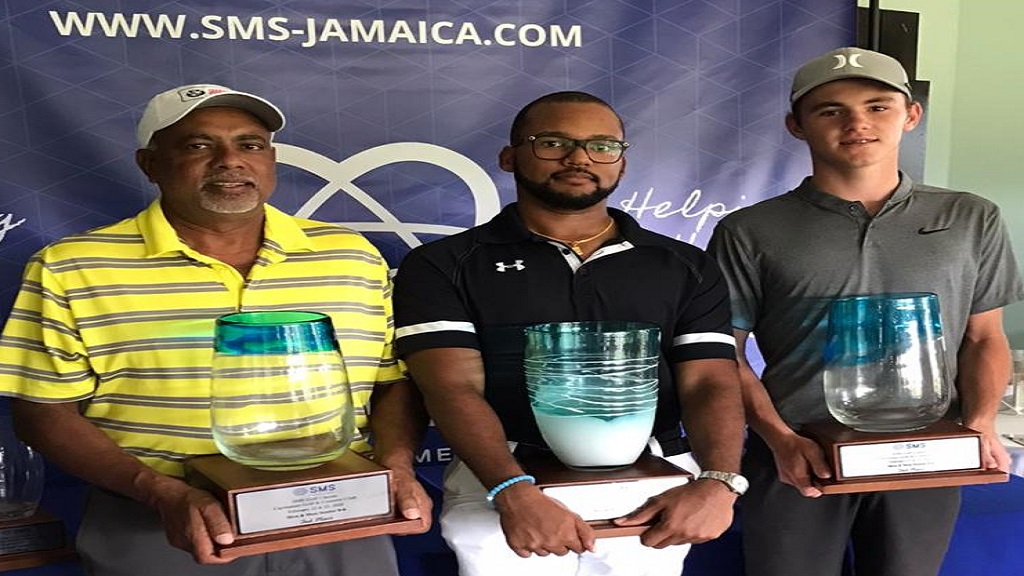 William Knibb (centre) displays his trophy after winning the SMS Golf Classic at the Caymanas Golf Club last weekend. At left is Sean Morris, who finished third, while runner-up Rocco Lopez is at right.

William Knibbs held his nerve to stave off stiff competition from 15-year-old Rocco Lopez on his way to a one-stroke victory at the Scientific & Medical Supplies (SMS) Golf Classic at the Caymanas Golf Club last weekend.

Knibbs had shot a three-under-par score of 69 on day one to enjoy a three-stroke lead over Robert Chin who shot an even-par 72.

However, Knibbs struggled to a seven-over-par 79 that included six bogeys, a triple bogey and just two birdies to end the tournament on 148.  Lopez, meanwhile, posted a three-over-par 75 to close on 149 for second place.

Knibbs dedicated the win to a close friend who died recently.

"First and foremost, I would like to dedicate this victory to my friend Luke Therrien, he passed away last month, very unfortunate," he said.

"Today was tough.  I got off to a really good start and I was thinking ‘smooth sailing ahead’ and I made an unfortunate triple on number six and then all of a sudden it became really tough.

“I had a bit of a cushion luckily and then Rocco start making a charge on the back nine so it was just a big grind.  I am just so happy that I was able to hold out for the victory."

“I was telling him earlier today that his game has improved significantly over the last couple of months and I expect to see this kind of performance later on in the year in the Hoerman Cup trials.  I feel like he could be somebody that could make a big contribution to our team."

The runner-up said he gave it his all and almost managed to pull off an unlikely victory.

"I know William is very good and he practices hard so I just came out here and tried to do my best.  I shot two over so I was five back and came in today trying to give my all. The conditions were harder than yesterday (Saturday) and I almost had him but he took it on the last hole."