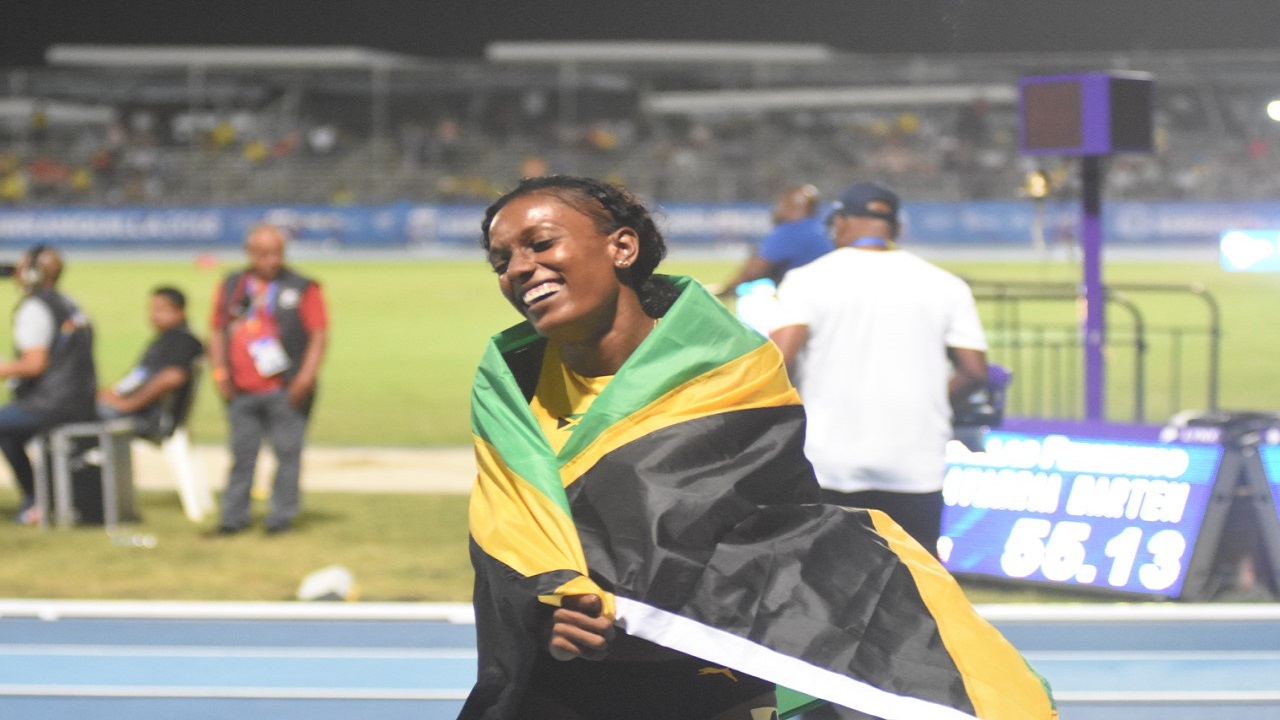 There were three other medals for Jamaica on the day as Annswert Whyte took silver in the men's 400m hurdles, while Jeanine Williams (100m hurdles) and Shaniece Love (discus throw) secured bronze medals.

Rhonda Whyte took the 400m hurdles gold in 55.08, leading six of the eight finalists under 56 seconds, including Mexico’s Zudikey Rodriguez and training partner Zurian Hechevarria, who were rewarded with personal bests of 55.11 and 55.13 respectively for silver and bronze. Jamaica's Rushell Clayton finished fourth in 55.30.

In a 19-man long jump final, Bailey produced his best leap of 8.07m to take gold in the sixth and final round.  The Jamaican got the better of Bermudan Tyrone Smith, who cut the sand with a mark of 8.04m with his final jump for the silver medal. Andwuelle Wright (7.94m) of Trinidad and Tobago finished third for the bronze medal. Jamaica's Wayne Pinnock did not show for the final.

Billed as one of the top names of the Games, Cuba’s world leader and 2018 world indoor champion Juan Miguel Echevarria suffered from a nagging pain in his right leg during warm-up and withdrew before the final got underway.

In the men's 400m hurdles, Annswert Whyte clocked a season best 48.50 for second place and the silver medal.

British Virgin Islands’ McMaster, the third fastest man in the world this year, produced a dominant performance on his way to the gold medal. He crossed the finish line in 47.60, his second fastest time ever and almost a second faster that the eight-year old Games record of 48.47. Aquino Santos (48.77) of the Dominican Republic finished third for the bronze medal. Shawn Rowe of Jamaica finished fourth in 49.30.

In the women's 100m hurdles, Williams had to settle for third and the bronze medal after a brave battle with Costa Rica’s Andrea Vargas in the early stages. However, the Jamaican lost her rhythm late on before clipping the final hurdle as the Central American pulled clear.

Williams crossed the line in 13.11. Vargas came home in a new personal best 12.90 for the gold medal to become her country's first woman to win gold at the CAC Games, while Haiti’s Vanessa Clerveaux finished second for the silver medal in 13.07.

“I’m happy but I was a little bit disappointed because I was there but then the last hurdle got to me, so I’m a little disappointed but I’m still happy about getting a medal,” Williams said.

“I’ve been having problems with the last hurdle sometimes in my races.  I still don’t think I was as focused as I should have been on the last hurdles, but I guess it happens in hurdles,” she added.

Perez, the second best ranked woman in the world this year, opened with 63.76m, but defending champion Caballero responded with 64.99m, half a metre better that her previous Games reacted. Perez reacted and released the 1kg implement to 66.00m in the second round. Caballero improved to 65.10m also in the second round but was not enough to regain the lead.

Second four years ago, Perez secured her first international senior title and defeated Caballero for the first time in a major competition.

In the men's 110m hurdles final, Jamaica's Lafranz Campbell had to settle for seventh place in 14.12.

As a result of the five track and field medals, Jamaica improved from ninth to eighth on the table with 18 medals - eight gold, three silver and seven bronze.