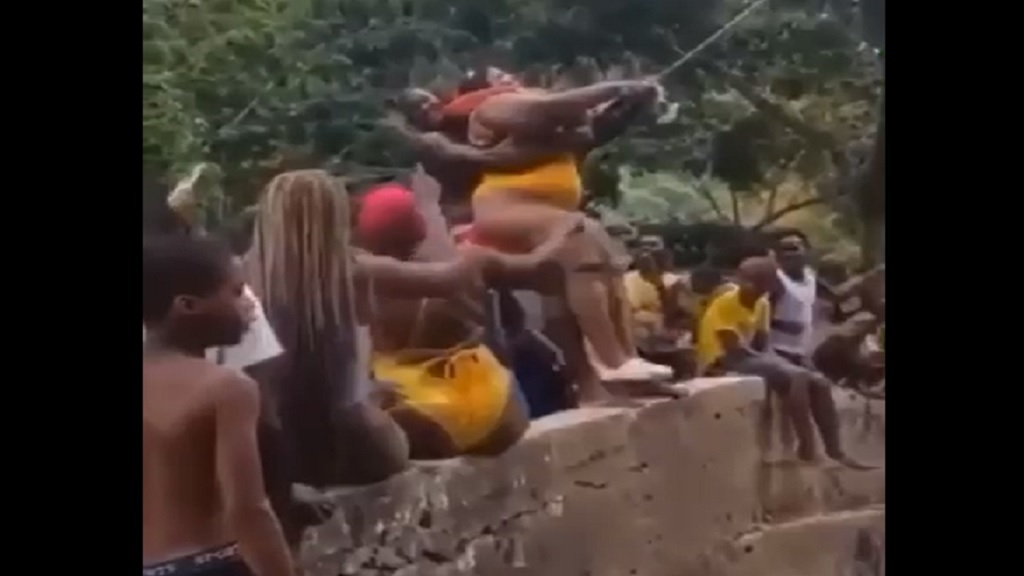 A screen grab of an example of the weekend spectacle at the Spanish River Bridge on the St Ann/St Mary border amid the COVID-19 pandemic.

The Spanish Bridge attraction, a popular St Mary riverside hangout for revellers and thrill seekers, is among a number of river and beach venues that have been disallowed from operating within the ongoing spike in COVID-19 cases across the island.

Local Government and Community Development Minister, Desmond McKenzie, announced the lockdown of the facilities in Parliament on Tuesday.

The move in relation to the Spanish Bridge attraction came after the facility came under intense scrutiny and investigation by the police and other local authorities for breaches of the Disaster Management Act.

Bordering the parishes of St Mary and St.Ann, the Spanish Bridge was said to be attracting thousands of patrons on weekends, notably on Sundays, and at a facility that is devoid of toilets and running water for sanitisation purposes.

In addition, there was reportedly virtually nothing by way of social distancing or the wearing of masks and adherence to other safety protocols that have been mandated by the Ministry of Health and Wellness during the COVID19 pandemic, at the venue.

So serious were the breaches that the police, in addition to launching an investigation, had asked property owners in the area to put in writing the damage that was being done to the tourism product by the spectacle, with a view to having the location included in orders under the Disaster Risk Management Act, to force the lockdown of the public entertainment events there.

Mayor of Port Maria, Richard Creary, in response to queries on the matter, said: “We are well aware of it and we have had several meetings with the various agencies in trying to come up with a strategy to deal with it.

“The police have appointed a team (the last time we met)… they explained to us that once they know of the tours that are planned, they are actually calling the people and telling them not to go up there, and have been turning back vehicles. It is, however, still a challenge. What we have been looking at also is a proposal from property owners in the area for a barrier to be placed in the road, which they would secure and man. We, however, have been checking with the Ministry (of Local Government) to look at the legality of it… and once it is decided that it is legal… then we would be looking at doing that.”

The mayor said the matter was being looked at seriously, adding that the Government would not sit idly by and watch others, for selfish reasons, destroy the many positive gains that have been made in the fight against the coronavirus (COVID-19) pandemic.

“We are seeking the advice regarding putting in a lift-up barrier which we don’t think should be a problem… considering that the road is owned by the municipality,” he added.”

Robert Montague, Minister of Transport and Mining and Member of Parliament (MP) for Western St Mary, on the border of which the bridge falls, said in a terse statement that “It is now a police matter (and) they need to act!”

Prime Minister Andrew Holness on Friday, August 7, reiterated calls for Jamaicans to be more responsible in adhering to the infection prevention and control measures that have been put in place to reduce the spread of the coronavirus.

“Our success can easily become our failure. If we believe that because we have had such low death rates and relatively low rates in terms of infection, and that the worst has passed, then we are only fooling ourselves and lulling ourselves into a state of complacency, which will bring on a second wave, which could potentially be more dangerous than the first. We have seen this happen in many countries before,” noted Holness.

He was speaking at a ceremony in Barrett Town, St James, following a tour of several projects in the community that were spearheaded by the Jamaica Social Investment Fund (JSIF).

Focus on breaches of health protocols at beaches and rivers- McKenzie