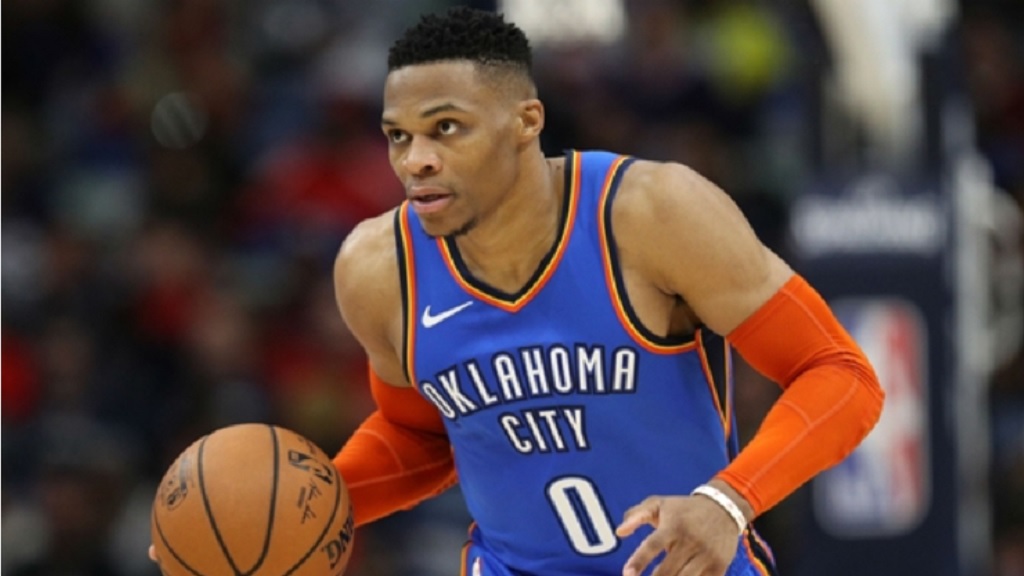 Westbrook and George combined for 56 points to help the Thunder overcome the Nets in the NBA on Wednesday.

The visiting Nets led 52-42 at half-time but Westbrook's 26th triple-double of the season helped the Thunder rally.

Westbrook finished with 31 points, 11 assists and 12 rebounds for the 130th triple-double of his career, while George had 25 points and nine rebounds.

"I just tried to stay in attack mode and find ways to continue to get my team-mates -- I thought in the first half, I did a bad job in the first half of finding my guys," Westbrook said. "In the second half, I made an adjustment."

Spencer Dinwiddie had 25 points off the bench to lead the Nets, who had their four-game winning streak snapped.

Klay Thompson led the Warriors to a 106-104 victory at the Houston Rockets. He netted 30 points just days after he dubbed the team's loss to the Phoenix Suns "the worst of the season." DeMarcus Cousins added 27 points — the most since he joined Golden State.

The Washington Wizards held off the Orlando Magic 100-90 behind Bradley Beal's 23 points. Thomas Bryant chipped in 21 points off the bench.

There were seven players in double-digits for the Miami Heat, but it was Justise Winslow who finished with a team-high 16 points in the team's whopping 108-74 win over the Detroit Pistons.

The entire Pistons roster should get this nod after the team's loss to the Heat. The 74 total points broke Detroit's season low for points scored that had been set in a loss to the Nets (75) on Monday. Blake Griffin led the losing efforts with 13 points, but finished the night with a minus-32. There were only two other players in double-digits: Wayne Ellington (11) and Luke Kennard with (10).

Trae Young gets Atlanta on their feet

This sequence got fans and the Atlanta Hawks' bench up and out of their seats. Atlanta went on to win 132-111 against the Memphis Grizzlies.

The Sacramento Kings are trying to catch up to the eighth-seeded Jazz, but will first have to face the Boston Celtics at the TD Garden on Thursday. Both teams enter the matchup coming off a loss and will hope to rebound to help secure their postseason fate. The Celtics are the fifth seed in the Eastern Conference and have a sizable advantage over the rest of the field. The Kings, however, need to start a rare win streak if they want to play into April.