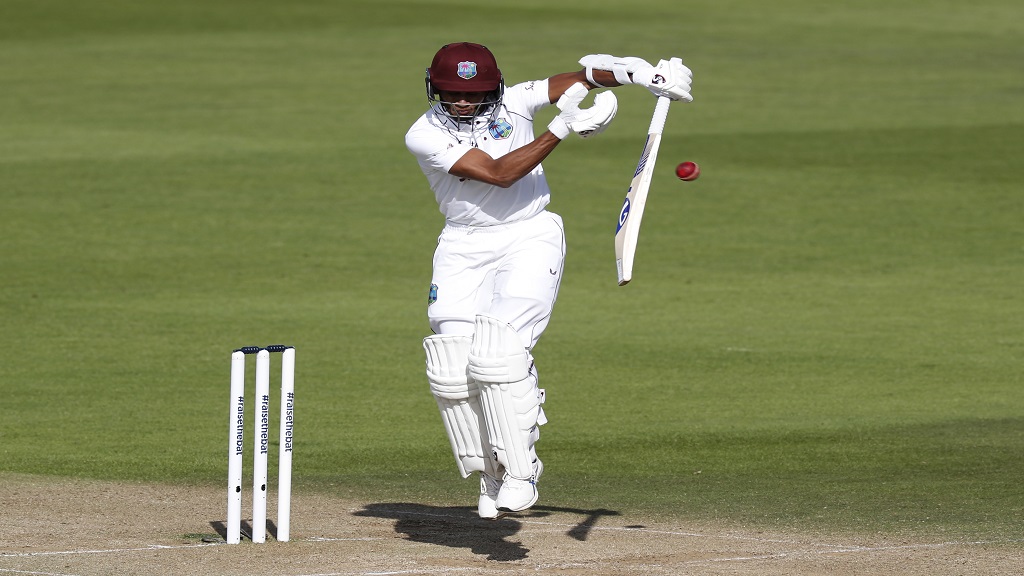 West Indies' Shane Dowrich bats during the third day of the first cricket Test match against England, at the Ageas Bowl in Southampton, England, Friday, July 10, 2020. (Adrian Dennis/Pool via AP).

Half-centuries by Kragg Brathwaite and Shane Dowrich set up the West Indies’ first-innings lead of 114 against England on day three of the first Test at the empty Rose Bowl on Friday.

The West Indies, resuming the day on 57-1, were all out for 318 less than an hour before stumps on the first full day of the rain-affected Test. In the middle session, they surpassed England’s first total of 204.

At the end of the day, England openers Rory Burns and Dom Sibley somehow survived 10 overs of zippy bowling that relentlessly attacked the off stump. They made 10 and 5 respectively to have England 15 without loss and their deficit down to 99. 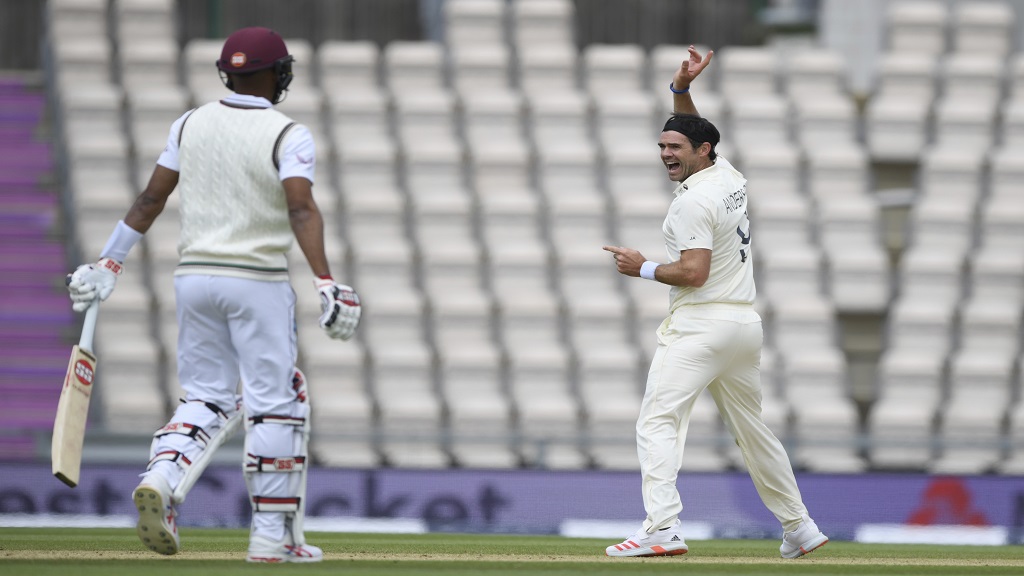 Stand-in captain Ben Stokes put England on the back foot by choosing to bat first in ideal bowling conditions, but he limited the damage on day three by taking a catch and four wickets. In reaching 150 Test wickets along with scoring more than 4,000 runs, he became the sixth man to the feat, after Garfield Sobers, Ian Botham, Kapil Dev, Jacques Kallis, and Daniel Vettori.

Brathwaite held together the start of West Indies’ chase, confidently putting up 65 before he was trapped by Stokes.

Stokes also took the slip catch to remove Shai Hope for 16 off the bowling of spinner Dom Bess, but the visitors reaped 122 runs in the first session of the match played in sunshine.

Soon after lunch, Roston Chase lost partners Shamarh Brooks (39) and Jermaine Blackwood (12) as they slipped to 186-5, but Dowrich saw off Bess and the batsmen stayed patient and regained control as they gradually eclipsed England’s total.

England took the new ball straight after tea, but Chase, who had been in no hurry, and Dowrich took the attack to the bowlers, instead.

Chase was out for 47 off 142 balls after an England review of James Anderson’s leg before wicket appeal, ending his 81-run stand with Dowrich.

West Indies captain Jason Holder had dismissed opposite Stokes, and Stokes repaid the favour. Holder made just 5 after warmup scores of 0, 5, and 2.

Dowrich reached 50 from 91 balls and looked impenetrable as he led West Indies past 300 and their lead past 100.

Meanwhile, Stokes was hobbling on his left foot but took out Alzarri Joseph on 18 and Dowrich, who edged down the leg side, on 61.

Broad said on Friday he was “frustrated, angry and gutted” at being deliberately dropped for a home test for the first time in eight years, and after being the leading wicket-taker in the two most recent series.

Gabriel, Kemar Roach, and Holder deserved wickets as England started their second innings, but Burns and Sibley rode their luck.