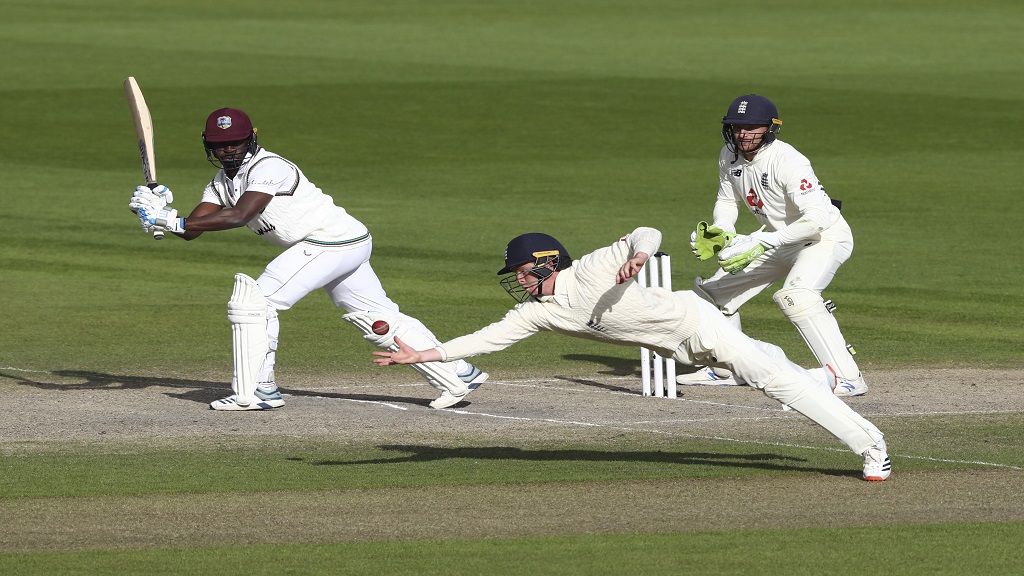 The hosts, 1-0 down following the opening game of the three-match rubber in Southampton, needed quick runs in order to set a substantial target with enough time to bowl the Windies out, and star all-rounder Stokes duly obliged in a stunning assault.

When the declaration came at 129-3, Stokes – promoted to open – had bludgeoned an unbeaten 78 from 57 deliveries to stand alongside his mammoth first-innings 176.

It meant the tourists required 312 for victory, a target that soon became nominal after Broad (3-42) ripped through their top order.

Shamarh Brooks (62) and Jermaine Blackwood (55) struck stylish knocks in a 100-run stand for the fifth wicket, but the irrepressible Stokes (2-30) bounced out the latter, setting up the England attack for a relentless push towards victory after tea.

The first over of day five from Kemar Roach cost 14 runs, with 13 of them to Stokes, and set the tone for an explosive start.

Joe Root, run out for 22, played a supporting hand as his vice-captain went to town, although West Indies would rue John Campbell dropping Stokes off Shannon Gabriel at deep extra cover.

A successful review by Broad had Campbell caught behind to conclude his forgettable morning, while Chris Woakes claimed the vital scalp of Kraigg Brathwaite lbw for 12.

As he did with a stunning second new ball spell in West Indies' first innings, Broad made a mockery of his omission in Southampton – bringing back a beauty to bowl Shai Hope and trapping Roston Chase lbw playing no shot.

That slew of single-figure dismissals meant West Indies were 37-4, leaving Brooks and Blackwood with a rebuilding job they approached with technical and temperamental prowess.

Enter Stokes, whose latest feisty exchange with Blackwood ended with a lifted targeted to the ribcage, which was gloved and pouched in style by Jos Buttler.

That wicket in the over before tea was followed by Woakes (2-34) removing Shane Dowrich for a duck when the action resumed.

Brooks erred in playing back to Sam Curran, departing lbw, before spinner Dom Bess came to the party to bowl Windies captain Jason Holder through the gate with a beauty.

An exhausted Stokes (2-30) had one more up his sleeve as Alzarri Joseph drove to Bess in the gully, with the latter wrapping things up at 198 all out as Ollie Pope completed a phenomenal short-leg catch to account for Roach.

Around the time Stokes smashed Gabriel for six to bring up his 50, it was easy to imagine him following his slowest Test century in the first innings with his fastest. There was a sense of inevitability when he claimed the key scalp of Blackwood, two deliveries after sprinting to field off his own bowling down at long-off. Right now, no task on a cricket field in any situation looks beyond this man.

Broad backs up words with deeds

Broad seethed after being left out of the first Test. England obviously have to carefully manage their fast bowlers' workload in this compressed schedule, but they will think long and hard about omitting Broad again after his magical spells in both innings turned a probable draw in England's favour.

A day-three washout was the catalyst for a thrilling conclusion to the second Test. England need to win the decider that starts in four days' time to regain the Wisden Trophy. The forecast does not look great at this stage.