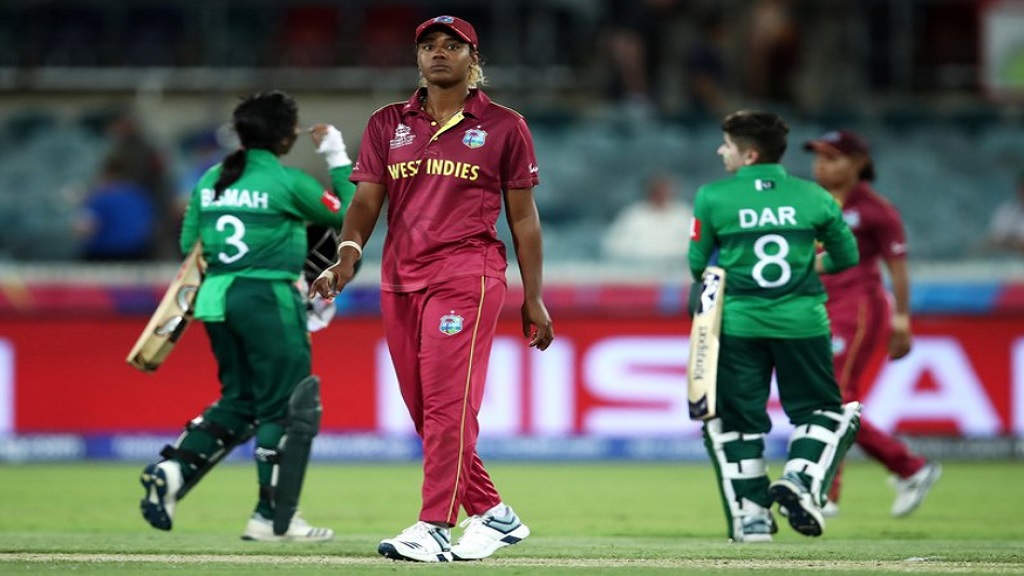 West Indies suffered an eight-wicket defeat to Pakistan in the 2020 ICC Women’s T20 World Cup in Australia on Wednesday at the Munaka Oval in Canberra.

Batting first on a good pitch, the 2016 champions lost three early wickets and were restricted to 124 for seven off their allotted 20 overs.

Pakistan openers Javeria Khan (35) and Muneeba Ali (25) controlled the chase expertly and put on 58 before captain Bismah Maroof’s unbeaten 38 steered her side over the victory target of 125 and to a seventh win at the Women’s T20 World Cup. Pakistan replied with 127 for two to win the match with 10 balls remaining,

With the defeat, West Indies dropped to third position in Group B on two points from two matches, while Pakistan earned their first points in their first match – and are second to England, which beat Thailand earlier in the day at the same venue.

West Indies got off to a bad start when Hayley Matthews, star of the 2016 Women’s T20 World Cup final, fell for a diamond duck as Diana Baig got the game’s first ball to move in the air and rap the opener on the pads.

The innings was built around another purposeful partnership between captain Stafanie Taylor and wicket-keeper Shemaine Campbelle, who both scored 43 runs. The pair added 63 for the fourth wicket after Deandra Dottin fell for one from 10 balls with the score at 28 for three in the seventh over.

Taylor faced 47 balls and hammered two fours and two sixes – over midwicket and over long-on. Campbelle also hit two boundaries and two sixes off 36 balls to follow up the match-winning 25 not out she made in the first match against Thailand at the WACA Ground in Perth last Saturday. It was Pakistan’s highest ever successful run-chase against West Indies in this format. There previous best was 116.

“Runs again the issue … when you look at the total and the type of batters we have, we should be scoring 150 and above. The batters need to be accountable and take that responsibility. We spoke about the first six (powerplay overs), how hard we want to go and rotating the strike. It was nice for Shemaine and myself to post a score on the board, but losing early wickets we couldn’t really propel,” Taylor said.

“The bowling has been terrific. The pacers have been really good. Pakistan came out today and played well. There is room for improvement. We keep looking at the areas we need to improve. We need to come out and show our prowess.”

West Indies will now travel to Sydney for their third match against England on Sunday, March 1 at the Sydney Showground Oval. First ball is 7:00 pm (3:00 am Jamaica Time).