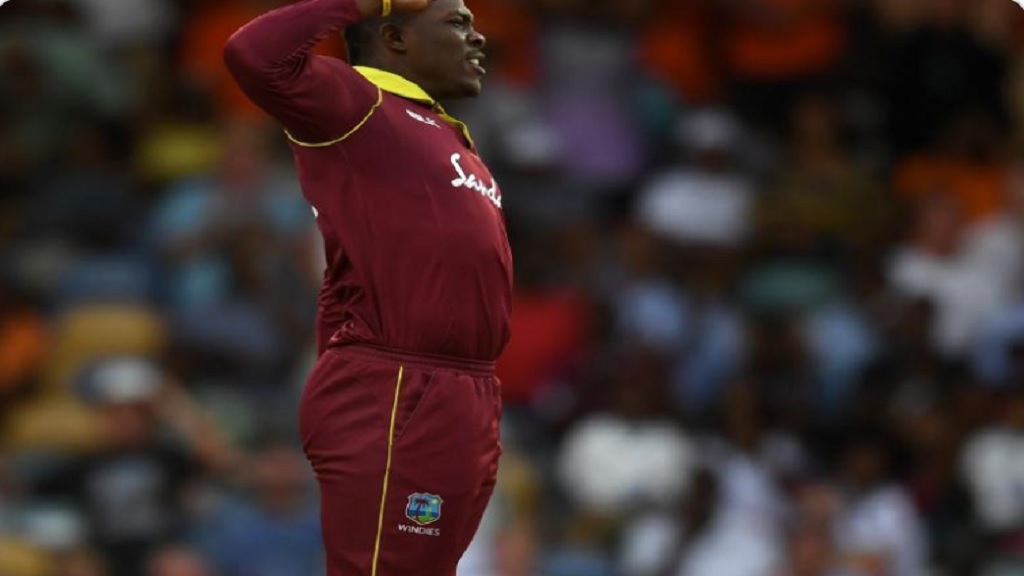 Having overhauled a target of 361 with relative ease at the same venue 48 hours earlier, England appeared to be cruising again when they sat at 228-4 in reply to the home side's 289-6, a total built around Shimron Hetmyer's excellent unbeaten hundred.

However, Ben Stokes' departure for 79 sparked a dramatic turnaround in proceedings, with West Indies claiming the final six wickets for 35 runs to bowl their opponents out for 263.

Recalled to the team, Cottrell (5-46) made the most of his opportunity, each of his breakthroughs quickly followed by an army-style salute that has become his trademark celebration.

The left-arm paceman struck twice at both the start and end of England's unsuccessful run chase, while he also had Eoin Morgan caught in the deep for 70 to end a fourth-wicket stand worth 99.

Stokes continued on despite his captain's departure but, crucially, none of England's well-set batsmen managed to see the job through, allowing West Indies to rally in front of a raucous crowd at the Kensington Oval.

The home spectators had been on their feet earlier to celebrate a fourth ODI century for Hetmyer, the left-hander reaching the milestone with a four down the ground from the penultimate delivery of the 50th over as he finished on 104 not out.

Chris Gayle had threatened another big score until he was bowled by Adil Rashid when aiming to smack a fifth six in his innings, the left-hander - who made 135 in a losing cause last time out - departing for an even 50.

John Campbell (23), Shai Hope (33) and Darren Bravo (25) all made contributions, but a more disciplined display from England's bowling attack left them an easier task than Wednesday's six-wicket win.

They looked on course to go 2-0 up despite losing openers Jonny Bairstow and Jason Roy in a hurry, both falling to Cottrell's disciplined bowling during the powerplay.

Joe Root eased to 36 before edging a short ball from Oshane Thomas to wicketkeeper Hope and while Morgan and Stokes combined impressively, England were unable to get over the line in the closing overs.

Having dismissed Stokes, West Indies skipper Jason Holder got rid of Jos Buttler - deceived by a slower delivery to be caught at cover for 34 - and Tom Curran with successive deliveries, reigniting his team's hopes before Cottrell claimed the spotlight once again.