'WE CAN USE PEACE': Trump and Pope Francis meet 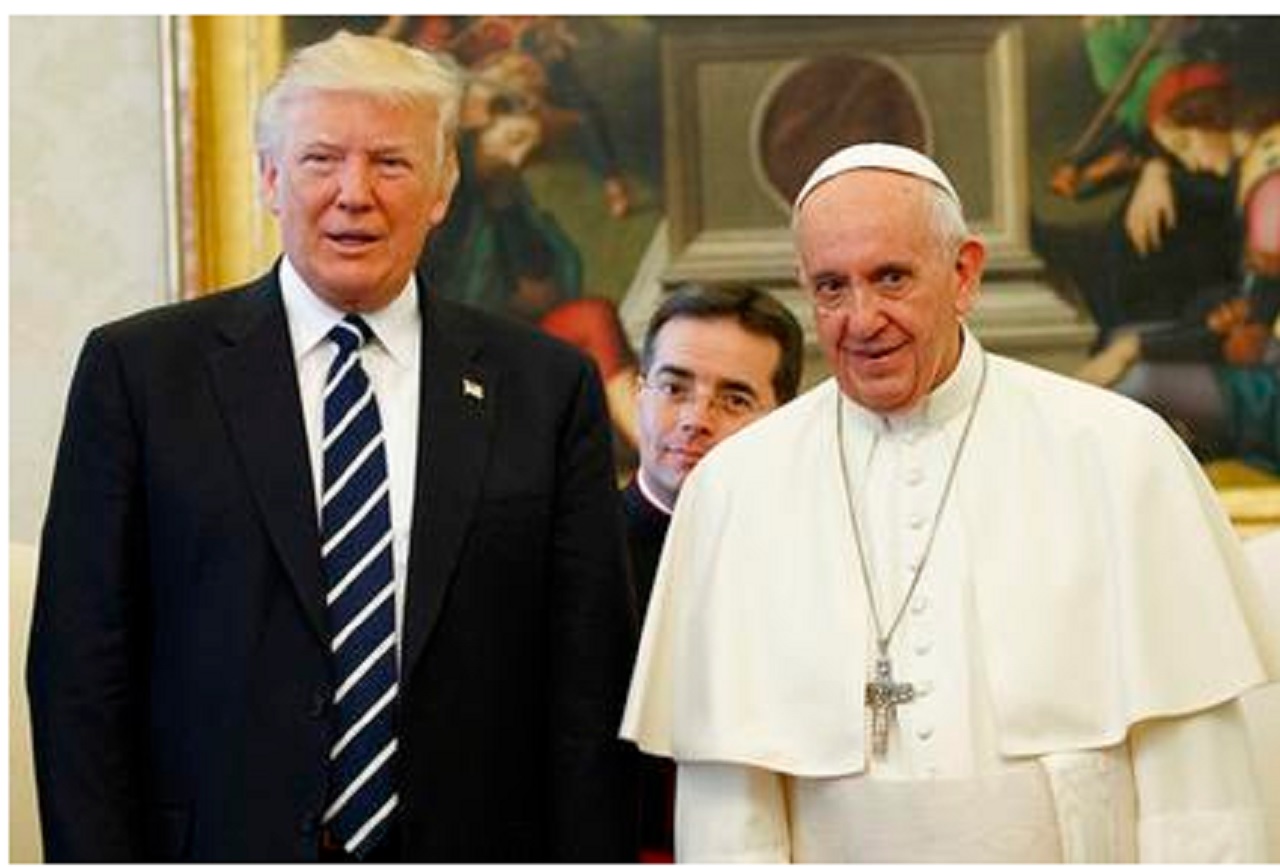 U.S. President Donald Trump stands with Pope Francis during a meeting, Wednesday, May 24, 2017, at the Vatican.

President Donald Trump and Pope Francis, two leaders with contrasting styles and differing worldviews, met at the Vatican on Wednesday, setting aside their previous clashes to broadcast a tone of peace for an audience around the globe.

Trump, midway through a grueling nine-day, maiden international journey, called upon the pontiff in a private, 30-minute meeting laden with religious symbolism and ancient protocol.

Neither man, unquestionably two of the most famous in the world, repeated their prior criticism of the other. The statements released afterward were deliberately vague and contained only hints of areas of disagreement. Trump smiled broadly, the pope smiled less, but both agreed, at least for a day, to settle on the same message: the need to avoid conflict.

That theme was reflected in their words and their gifts.

The pope, upon completing their meeting, gave the president a medal featuring an olive branch.

"We can use peace," said the president, concurring with the symbolism.

Francis also gave a message of peace and three bound papal documents that to some degree define his papacy and priorities, including the family and the environment.

The pope told Trump he signed the message "personally for you." Trump said he would read the books.

In exchange, Trump presented the pontiff with a custom-bound, first-edition set of Martin Luther King Jr.'s works, an engraved stone from the King memorial in Washington and a bronze sculpture of a flowering lotus titled "Rising Above."

"I think you'll enjoy them. I hope you do," Trump said.

When Trump departed, he told the pope: "Thank you, I won't forget what you said."

The visit began with a handshake after each man arrived, Trump in a lengthy motorcade, Francis in a Ford Focus. The president was heard thanking the pope and saying it was "a great honor" to be there. They posed for photographs and then sat down at the papal desk, the pope unsmiling, as their private meeting began.

It ended a half hour later when Francis rang the bell in his private study. The pontiff was then introduced to members of Trump's delegation, including his wife Melania, his daughter Ivanka and son-in-law Jared Kushner, as well as aides Hope Hicks and Dan Scavino.

Smiling for the staff, Francis had a light moment with the first lady, asking via translator, "What do you give him to eat, potica?" referring to a favorite papal dessert from her native Slovenia.

The first lady laughed and said "Yes." She and Ivanka covered their heads in a sign of papal respect, a gesture they did not partake in Saudi Arabia.

Afterward, as he met with Italian Prime Minister Paolo Gentiloni, Trump said of the pope: "He is something."

"We had a fantastic meeting," the president said. "It was an honor to be with the pope."

Trump tweeted later that the meeting was the "honor of a lifetime." A statement from the Vatican later said "satisfaction was expressed" at their "joint commitment in favor of life" and that there was hoped-for collaboration on health care, assistance to immigrants and protection of Christian communities in the Middle East.

U.S. Secretary of State Rex Tillerson said Trump and the pope talked extensively about extreme terrorist threats and extremism, and the radicalization of young people. Tillerson said climate change and migration issues came up in Trump's meeting with the cardinal secretary of state.

In recent days, Francis and Trump have been in agreement on a need for Muslim leaders to do more against extremists in their own communities. But there are few other areas where their views align.

The president's prior anti-Muslim rhetoric - including his musing that Islam "hates" the West - is the antithesis of what the pope has been preaching about a need for dialogue with Muslims. Francis also differs sharply with Trump on the need to combat climate change and economic inequality.

Trump's predecessor, Barack Obama, had a private audience with Francis at the Vatican in 2014 that lasted 50 minutes. But the timing Wednesday was tight as Francis had his weekly Wednesday general audience. The thousands of pilgrims on hand forced Trump's motorcade to enter Vatican City from a side entrance rather than the grand entrance through St. Peter's Square.

The meeting, which concluded Trump's tour of the world's largest monotheistic religions, comes after the president and pope collided head-on early last year, when Francis was sharply critical of Trump's campaign pledge to build an impenetrable wall on the Mexican border and his declaration that the United States should turn away Muslim immigrants and refugees.

"A person who thinks only about building walls, wherever they may be, and not building bridges, is not Christian," Francis said at the time. The pontiff has been a vocal advocate for aiding refugees, particularly those fleeing the violence in Syria, deeming it both a "moral imperative" and "Christian duty" to help.

Trump then called Francis "disgraceful" for doubting his faith.

Though both Trump and Francis are known for their unpredictability, papal visits with heads of state are carefully arranged bits of political and religious theater that follow a specific program, with little room for deviation or unwanted surprises. Trump, the 13th president to visit the Vatican, also toured the Sistine Chapel.

Trump's visit to the Eternal City follows two stops in the Middle East where he visited the cradles of Islam and Judaism. In Saudi Arabia, he addressed dozens of Arab leaders and urged them to fight extremists at home and isolate Iran, which he depicted as a menace to the region. In Israel, Trump reaffirmed his commitment to strong ties with the nation's longtime ally and urged Israelis and the Palestinians to begin the process of reaching a peace deal. No details or timetable have yet to be established for negotiations.

But while Trump received extravagantly warm welcomes in Riyadh and Jerusalem, the reception could grow cooler now that he's reached Europe, site of widespread protests after his election. Climate change activists projected the words "Planet Earth First" on the massive dome of St. Peter's Basilica at the Vatican Tuesday night and protests are expected after Trump arrives in Brussels for a NATO meeting and Sicily for a G-7 gathering.