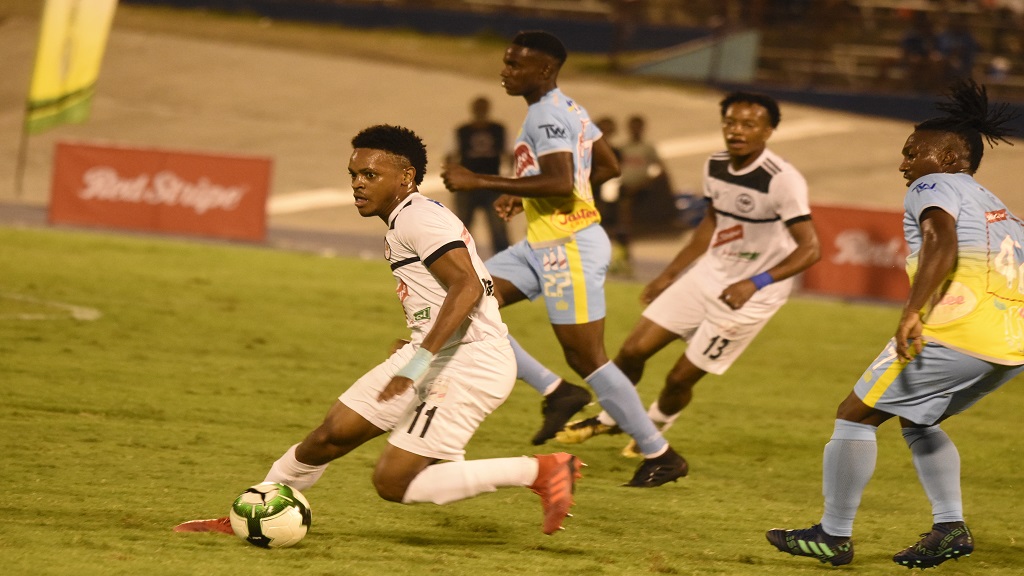 Alex Marshall of Cavalier dribbles away during their RSPL first-leg semi-final match against Waterhouse at the National Stadium on Monday, April 8, 2019. (PHOTOS: Marlon Reid).

Waterhouse are crediting the rest between the preliminary round and the start of the semi-finals last Monday at the National Stadium as a key factor in their 2-0 first-leg victory over Cavalier in the Red Stripe Premier League (RSPL).

Defending champions Portmore United and Waterhouse were inactive for 18 days after the preliminary round because of the structure of the competition.

At the end of the preliminary round the top two teams on points earned automatic places to the semi-finals, while third to sixth place had to enter into a playoff for the other two spots.

Assistant coach Daniel Bent said the break gave his players time to recover after the preliminary round of the competition and prepare for their opponents in a systematic way.

Bent said, "it was a team effort although I think the rest from competition helped because you cannot play all the time. Sometimes you need the rest and the rest paid dividend in our performance."

Bent further added that "I think we made the right decisions and we had the mindset to get into Cavalier skin from early. We got two chances and we put away the two chances so we got the lead early.

"I think that in some ways gave us that advantage going into the halftime and at the end of 90-plus minutes we have the edge going forward. So we are very much pleased about the performance."

While Waterhouse and Portmore United were inactive, Cavalier and Mount Pleasant Football Academy had to qualify for the semi-finals through a two-leg playoff. Cavalier got the better of Arnett Gardens and Mount Pleasant defeated University of the West Indies (UWI) FC in the quarter-finals contests.

And the two teams, which came out of the quarter-final playoffs victorious lost their first-leg semi-final contest as Mount Pleasant Football Academy suffered a 2-1 defeat against Portmore United, also on Monday.

Cavalier coach David Lalor believes his team can still progress to the final despite trailing 2-0 going into the return semi-final leg.

He said, "I don't know that Waterhouse have much more to offer than what they did, but I believe that we can do much better than what we did. So I guess we will just come next week, more purposeful and get the job done.

"It is never over. The fat lady has not sung as yet with 90-plus minutes for us. Waterhouse scored two goals and I think we are two goals more than the Waterhouse team on any given day. Once we can focus on the specifics, I think we can get the job done."