WATCH: With the world in focus, Toni-Ann records ‘I Have Nothing' 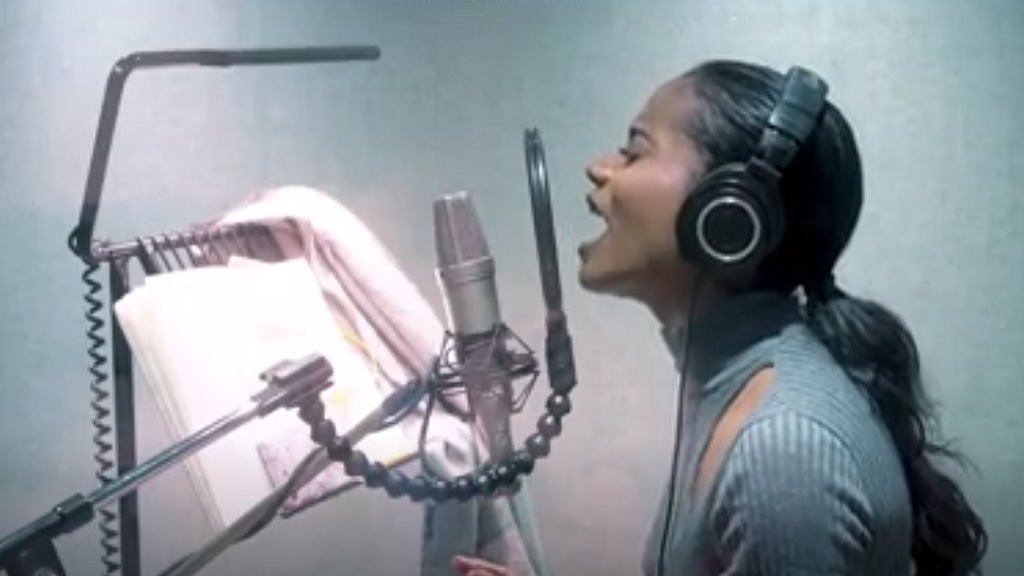 A screen grab from a video of the recording of Whitney Houston monstor hit song, 'I Have Nothing', by Miss World 2019, Jamaica's Toni-Ann Singh, in London last week.

Jamaica’s Toni-Ann Singh has created history by becoming the first Miss World to record a song, which she did by voicing Whitney Houston’s monster hit, ‘I Have Nothing’, at the world-famous Abbey Road Studios in London, England.

Singh had, a week earlier, delivered a powerful rendition of the song at the Excel Arena in London to eventually cop the coveted Miss World title from a field of 111 contestants.

She made the revelation about voicing the song at a hastily-called press conference in Kingston on Saturday morning. She arrived in the island on Friday evening for a four-day whirlwind visit.

“It is something unique, and it’s never happened before,” said Julia Morley, organiser of the Miss World pageant, before handing Singh the microphone to share her story.

“I’m so excited. It has been only a week,” Singh said while noting that over that short time she had met some of the most wonderful people in the world.

She said she never thought she would have had the opportunity to sing on the Miss World stage, but, having done so, it was discussed with the organisers, and it was quickly decided that she should record the song.

It was done at no less a place than Abbey Road Studios where the Beatles recorded some of their biggest hits in the 1960s and up to 1970, when they released their 12th and final studio album, ‘Let it Be’, which went on to top charts in many countries. Singh said she had a hard time coming to grips with the fact that she was recording at the world-famous site.

“We recorded ‘I Have Nothing’ and we want to give it back as a gift, so we’re giving it to Beauty with a Purpose,” Singh stated.

The Beauty with a Purpose programme is a registered charity and a non-profit organisation associated with Miss World. It raises money and participates in humanitarian projects across the world. It focuses primarily on disadvantaged children.

Singh said proceeds from the recording, which will be released on Youtube, will be used to fund Beauty with A Purpose projects.

The newly-crowned Miss World was barely able to contain her emotions as, after pleading with everyone to support the effort, Singh said, “I’m so excited to share this moment with all of you,” after which the studio version of the recording, for which a moving video has already been produced, was played for the audience in what was a de facto premiere of the song.

The video showed children in some particularly tough situations around the world, and includes moments from Singh’s Miss World performance.

The press conference was attended by Moley and Singh’s parents, her mother Jahrine Bailey and father, Bradshaw Singh.

Culture, Gender, Entertainment and Sports Minister, Olivia Grange, revealed that Singh’s special project in Jamaica will be the Women’s Centre of Jamaica Foundation for teenage mothers in St Thomas. Singh told the press conference that she is a descendant of two women who were teenage mothers.

“And I have seen them stress the importance of education for their children,” she said while pointing to her mother and father who were seated close to her at the head table. She said they in turn instilled in her the importance of an education.

She said while she was grateful to her parents for the education she received, she has come to realise that there are many great women in Bath, St Thomas, where she is from, and in Jamaica generally and all over the world, with the same capabilities that she has, but lacking opportunities to realise their dreams.

Grange said the women’s centre caters to young mothers and pregnant teenagers, including some who have been sexually abused.

“She has taken that on in a very personal way and I really want to applaud her for that,” said the minister.

Miss World has already started batting for her parish of birth, as she made an appeal for better road conditions there.