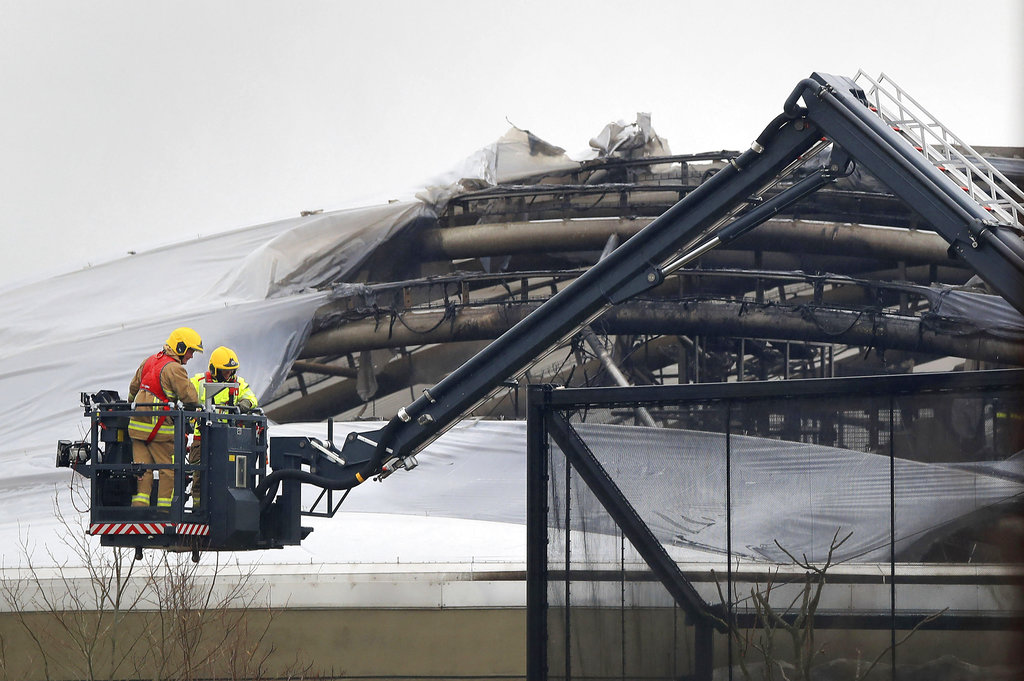 Firefighters at Chester Zoo after a fire broke out in the Monsoon Forest habitat enclosure of the zoo, in Chester, England, Saturday Dec. 15, 2018. (Peter Byrne/PA via AP)

A fire broke out Saturday in an enclosure at one of Britain's largest zoos, forcing keepers to evacuate visitors and move animals away from the flames.

Witnesses said the blaze broke out about 11:30 a.m. in the Monsoon Forest habitat area, with winds fanning flames in the building's inflatable roof. The zoo, which is near Chester, south of the English city of Liverpool, did not give a cause for the fire.

The zoo said it worked with emergency services to bring the situation under control.

"Critically endangered Sumatran orangutans and other mammals are all accounted for," the zoo said on Twitter. "We are working hard to account for all other species."

The zoo describes the Monsoon Forest exhibit as the largest indoor zoo exhibit ever built in Britain, offering a chance to explore a sub-tropical world filled with creatures ranging from small insects to crocodiles. It also contains exotic plants and palm trees in a climate that mimics Southeast Asia and has raised walkways and underwater viewing areas.

The enclosure, which opened in 2015, was part of a 40 million pound development at the zoo.

"We were very worried for the people and animals that would have been in the building," said David Clough, who lives across the road from the structure. "Orangutans and gibbons are our nearest neighbors there, but there are many other animals, including free-flying birds."

The zoo, which opened in 1931, has some 15,000 animals, CEO Mark Pilgrim said on its website. It cares for some 500 different species, about half of which are endangered, and supports and conducts 70 conservation projects at home and abroad.

With 11 names left, search for wildfire missing winds down