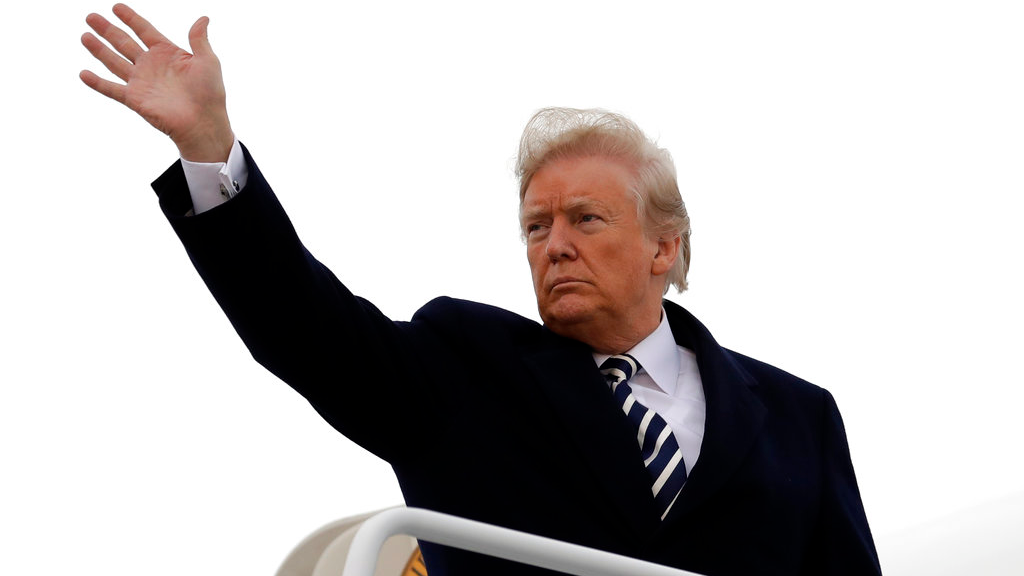 President Donald Trump says a video he tweeted showing a Mexican migrant in a courtroom smiling and boasting about killing police officers is tough "but correct."

The video, which both Democrats and Republicans have denounced as a racist campaign tactic, has taken a central role in Trump's closing midterm election argument. It comes amid a frenzy of hardline immigration proposals pushed out by Trump in the final stages of the campaign, including sending troops to the border and revoking birthright citizenship.

The ad is reminiscent of the infamous "Willie Horton" ad about a black man who raped a woman while out of prison on a weekend furlough. The ad, condemned as racist, was used in 1988 against Democratic presidential candidate Michael Dukakis, who supported the furlough program when he was governor of Massachusetts.

"I don't view it as the Willie Horton ad at all," the president told The Washington Times in an interview published Friday. "I think it's just an ad where somebody is a bad guy, came in illegally, twice, and we can't do that."

The immigrant living in the country illegally sports a shaved head and long chin hair. He speaks in accented English in the video, and his words are clear: He's killed cops and he's "gonna kill more cops soon."

The video alleges without evidence that Democrats were responsible for allowing Bracamontes into the U.S. Bracamontes, a twice-deported immigrant from Mexico, was sentenced to death in California for the 2014 killings.

"Illegal immigrant, Luis Bracamontes, killed our people!," the video states, adding, "Democrats let him into our country ... Democrats let him stay." It includes scenes of a migrant caravan moving toward the U.S., warning ominously, "Who else would Democrats let in?" and suggesting that more violence would soon penetrate the border.

The video tweeted by Trump did not immediately appear to be running on television — it has a runtime longer than most TV ads — although it received extensive coverage on cable news networks. As of Thursday afternoon, it had received 3.51 million views in less than 24 hours and was the "pinned" tweet atop Trump's profile, meaning it was the first thing any visitor to his Twitter page would see.

The White House and the Trump campaign did not immediately respond to requests for comments as to who made or paid for the video or if any tax dollars were used to run it from the president's account.

"This is a sickening ad. Republicans everywhere should denounce it," said Republican Sen. Jeff Flake of Arizona, a frequent Trump critic. And Rep. Carlos Curbelo, R-Fla., seeking re-election in a Democratic-leaning South Florida district, said he'd not seen the video but criticized Trump's use of it.

"I can tell you that it's definitely part of a divide-and-conquer strategy that a lot of politicians, including the president, have used successfully in the past," Curbelo said Thursday on CNN. "I hope this doesn't work."

Tom Perez, chairman of the Democratic National Committee, called the new ad the "dog whistle of all dog whistles."

"This is distracting, divisive Donald at his worst," Perez said on CNN. "This is fearmongering."

The dark video stood in stark contrast to an ad circulated by the Trump campaign earlier in the week that highlighted rosy economic numbers and depicted gauzy scenes of American suburban life. That ad was part of a blitz by Trump's campaign, and his campaign manager, Brad Parscale, did several interviews to promote it.

As for the new video, though, the campaign was silent Thursday and Parscale did not respond to requests for comment.

But the Trump campaign was behind the January 2018 video, released on its YouTube page, that featured Bracamontes' courtroom appearance. That video was timed to the one-year anniversary of Trump's inauguration and meant to promote his immigration agenda.

The previous year, Jessica Davis and Susan Oliver, the widows of Detective Michael Davis and Deputy Sheriff Danny Oliver, were invited to Trump's address to Congress. Bracamontes' case — he was sentenced to death in March — also received steady coverage on Breitbart and other right-wing news sites.

Trump has long promoted the alleged danger presented by those living in the country illegally, although statistics show they do not commit crimes at a higher rate than citizens. During his 2016 campaign, he frequently appeared with so-called "angel families" — those who lost loved ones at the hands of immigrants in the nation illegally.

The Latest: Ryan, Trump at odds on birthright citizenship