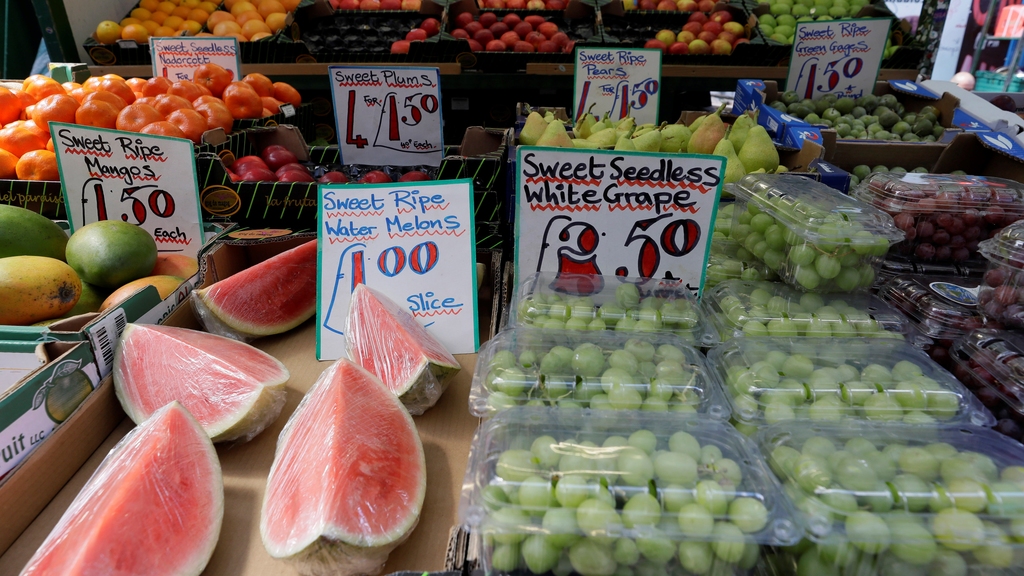 A fruit stall displays fruit at a market in London, Wednesday, Aug. 7, 2019. The U.K. food industry is asking the government to set aside competition rules so companies can coordinate supply decisions to combat shortages in the event Britain leaves the European Union without an agreement on future trade relations. (AP Photo/Kirsty Wigglesworth)

The British economy shrank in the second quarter for the first time since 2012 as Brexit uncertainties weighed on business investment and firms reduced their stockpiling after Britain's departure from the European Union was postponed, official figures showed Friday.

The decline is set to raise the alarm that Brexit uncertainty is increasingly weighing on the economy. Most economists expected the economy to flat-line. The quarterly drop lowered the annual rate of growth to 1.2% from 1.8% in the first quarter.

The Office for National Statistics noted there was "increased volatility around the U.K.'s original planned exit date from the European Union in late March."

Brexit was meant to happen on March 29 but was delayed to the end of October after Parliament rejected the withdrawal agreement that the previous prime minister, Theresa May, had negotiated with the EU.

Before the extension request, many firms ratcheted up their inventories to help cushion the likely disruption from Britain crashing out of the EU on March 29 without a deal. That business activity helped the economy grow by 0.5% in the first quarter.

Since then, companies have stopped stockpiling as much. Many car companies also brought forward their annual maintenance shutdowns to April from later in the year to cushion the potential blow from Britain leaving the EU without a deal on March 29.

It was largely the combination of these Brexit-related developments that contributed to a sharp 1.4% quarterly decline in the output of production industries.

The fact that the overall economy performed worse than anticipated is likely to increase concern about Brexit's corrosive effect on the economy. Business investment, which has been historically weak since the country voted in June 2016 to leave the EU, weakened further in the second quarter, contracting by 0.5%.

"Brexit uncertainty, and to a lesser extent, weaker global demand, has reduced firms' appetites to expand," said James Smith, an economist at ING bank. "Meanwhile, contingency planning activities for a no-deal Brexit are costly and often resource-intensive, reducing scope to lift capital spending. We expect this trend to continue for the rest of the year."

May's replacement as prime minister, Boris Johnson, has insisted there will be no further delay to the Brexit date and that Britain will leave the EU on Halloween come what may. That's stoked fears that Britain will leave the EU without a deal, a development that would see tariffs and other restrictions imposed on traded goods. Most economists think that would lead to a recession; even Brexit's most passionate supporters say it would be disruptive at least in the short-term. The pound has fallen to 2-1/2 year lows against the dollar and was down 0.3% on Friday, at $1.2093.

Sajid Javid, Britain's new Treasury chief, conceded that this is a "challenging" period for the British economy but insisted that the fundamentals remain "strong."

"The government is determined to provide certainty to people and businesses on Brexit — that's why we are clear that the U.K. is leaving the EU on 31 October," he said.

The British economy is not expected to fall into recession — commonly identified as two-quarters of economic contraction — in the third quarter partly because the car manufacturers will be operating in August, having brought forward their maintenance period earlier in the year. Also, Friday's figures showed that British consumers remain upbeat as unemployment is at 44-year lows and wages are rising solidly and outpacing inflation.

However, Brexit uncertainty looks like it will get more acute in September when Parliament returns from its summer recess and the political debate and manoeuvring around a no-deal Brexit intensifies.

Add in worries over the global economy as a result of the trade conflict between the United States and China, and the economic headwinds are mounting. The Bank of England warned last week that there's a one-in-three chance that Britain will slip into recession in the early part of 2020 even if a Brexit ends up being smooth.

Boris Johnson tries to reassure on Brexit as pound slumps