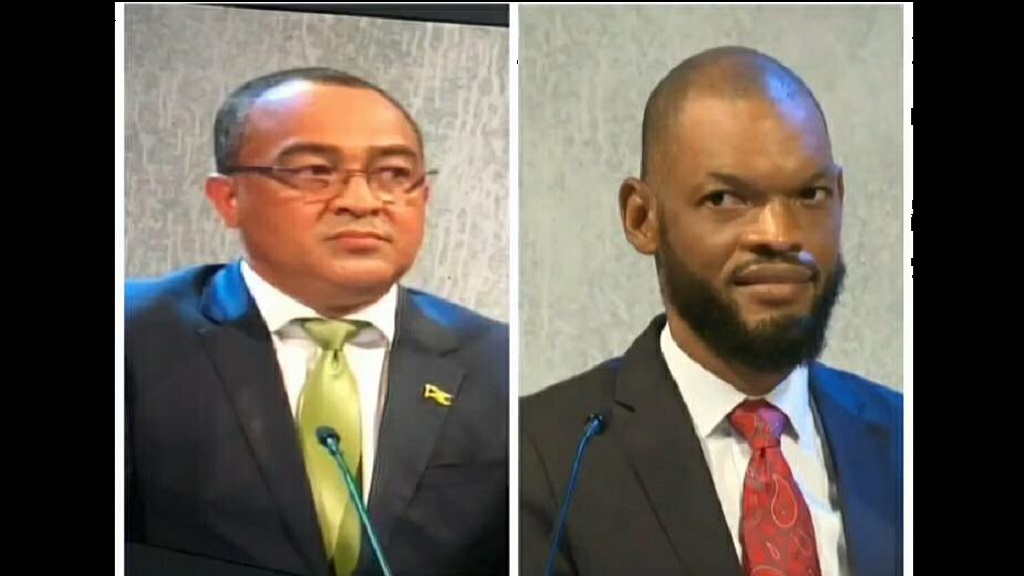 Combination of photos showing Health Minister Dr Christopher Tufton (left) of the JLP staring at his opponent Raymond Pryce after the latter made a wry remark during Tuesday night's national election debate.

The intense stare by the Jamaica Labour Party's Tufton came when Pryce was responding to the health minister's earlier reprimand of PNP debater Dr Dayton Campbell.

Campbell had sought to link the controversial death of Jodian Fearon to political campaigning by the JLP for a by-election in South East Clarendon and COVID-19, but Tufton rubbished the claim and demanded that Campbell apologise to Fearon's family.

In response to Tufton, Pryce said: "I think we just discovered why the Minister of Health has done so badly with dengue and now COVID. Perhaps some marketing of... Let's not go there..."

Tufton can then be seen staring at Pryce, who continued: "But you (Dr Tufton) directed in your rebuttal assertions to me. You seem to always be looking in the wrong direction. It was my colleague to the left (Dr Campbell) who made the remarks (about Jodian Fearon). And the remarks by the way were accurate."

The use of the word "marketing" by Pryce is thought to have been an allusion to the issues relating to the award of contracts by the Ministry of Health and Wellness to public relations outfit, Market Me Consulting Limited.

In July, a number of salacious postings appeared on social media related to Tufton and a CEO of the company.

It later emerged that Market Me Consulting Limited had benefited from Government contracts totalling at least $87 million since 2016. The company has also recently benefited from coronavirus-related payments.

The contracts did not go to public tender.

Parliament's Public Administration and Appropriations Committee (PAAC) had been probing the award of contracts by the health ministry.