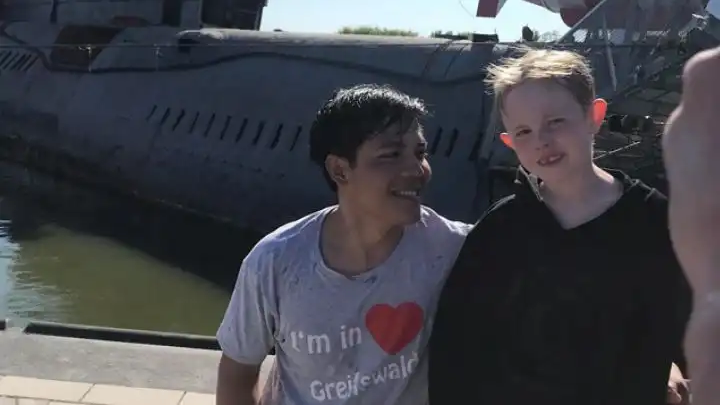 Thai tourist Ruchamon Pidtafai and the 8-year-old boy he rescued.

This is the heart-warming moment a passing Thai tourist rescues an eight-year-old boy drowning next to a Cold War submarine.

Ruchamon Pidtafai, 30, and three friends were visiting the maritime museum in Usedom, Germany, when they heard the boy calling for help.

He had been playing on the edge of the harbour when he fell ten feet (three metres) into the filthy green water below and was struggling to stay afloat as onlookers stood watching.

But brave Ruchamon ran over and immediately leapt into the water --with his clothes on - to search for the youngster who was disappearing below the surface.

The engineer grabbed the boy and dragged him to the side where they clung together onto a metal ladder before his friend, Khun Tum, 35, and a harbour worker came across on a raft for them to climb aboard.

Ruchamon, who is originally from Nong Khai, Thailand, has now been hailed a hero for saving the life of the boy.

He said: ''I heard the splashing and the boy calling for help. There were people shouting. Me and my friends ran over and saw what was happening. I know I can swim so I didn't hesitate to jump straight in. I didn't think twice about this. It was an instinct. The boy was struggling at first, so it was a good thing he wasn't scared or panicking too much or it could have been worse. He kept calm and did well. It's nice to be called a hero. But I was just the best I could to help somebody.''

The boy's mother returned to the scene moments after her son was pulled out of the water and was stunned to discover what had happened.

Watch: Toddler lying down on escalator gets hand stuck