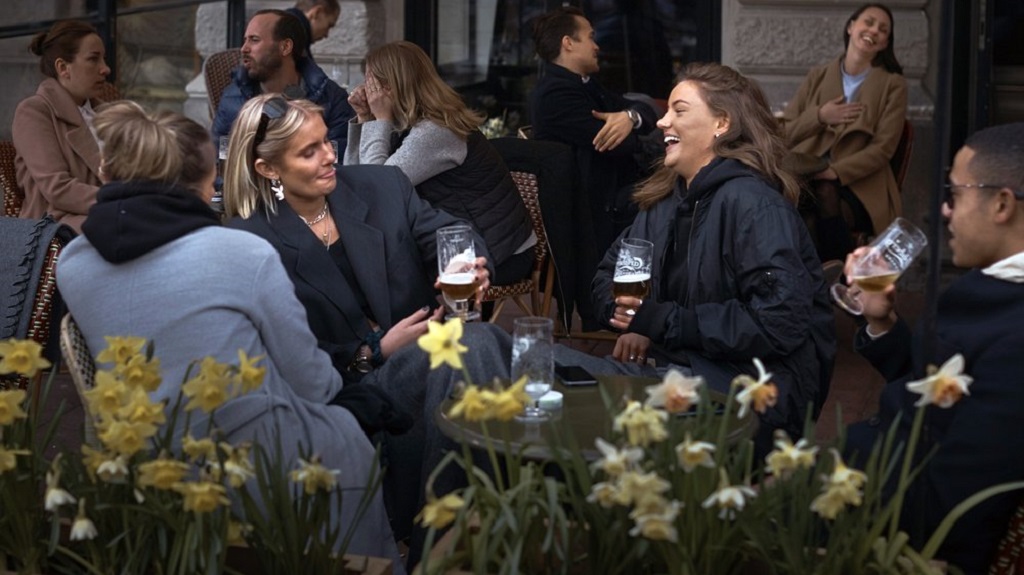 FILE - In this Wednesday, April 8, 2020 file photo people chat and drink outside a bar in Stockholm, Sweden. Sweden is pursuing relatively liberal policies to fight the coronavirus pandemic, even though there has been a sharp spike in deaths. The prime minister has proposed a new emergency law that would allow the authorities to shut down public venues and transportation quickly if needed. (AP Photo/Andres Kudacki, File)

Enjoying the early Easter sun, crowds of people gathered at outdoor cafes and parks in Stockholm this weekend. In much of the world, this sort of gathering would be frowned upon or even banned.

As countries across Europe have restricted the movement of their citizens, Sweden stands out for what its chief epidemiologist, Anders Tegnell, calls a "low-scale" approach that "is much more sustainable" over a longer period.

President Donald Trump has suggested that a rising number of COVID-19 deaths indicate Sweden is paying a heavy price for embracing the idea of herd immunity — that is, letting many individuals get sick to build up immunity in the population.

He said: "Sweden did that -- the herd. They called (it) the herd. Sweden is suffering very, very badly. It's a way of doing it."

Sweden has rejected this accusation, but so far the country has only banned gatherings larger than 50 people, closed high schools and universities, and urged those over 70 or otherwise at greater risk from the virus to self-isolate.

The softer approach means that schools for younger children, restaurants and most businesses are still open, creating the impression that Swedes are living their lives as usual.

Yet while most businesses in Sweden are still operating, the economic cost of the pandemic is already being felt.

Last week, 25,350 Swedes registered as unemployed, according to the Stockholm Chamber of Commerce — a larger increase than during the 2008 financial crisis.

Sweden, with a population of 10 million, has registered 899 deaths and more than 10,000 confirmed cases, but due to limited testing, experts believe those numbers understate the pandemic's true toll.

After a sharp spike in deaths in Sweden, Prime Minister Stefan Lofven proposed an emergency law allowing the quick closure of public venues and transportation if needed. Lofven also warned citizens to prepare for possibly up to thousands of deaths.

Nevertheless, Tegnell, the chief epidemiologist, insists that Sweden's approach still seems to make sense, though he also acknowledges that the world is in uncharted territory with the virus.

He argues that while Sweden might have more infections in the short term, the "low-scale" strategy it is taking could mean that it will not face the risk of a huge infection spike that other countries might face once their lockdown is lifted.

He also believes social distancing measures are working as authorities have recorded a sudden end to the flu season and to winter vomiting illness.

Some doctors moving away from ventilators for virus patients

The Latest: Group says virus could push 500M into poverty