WATCH: Students locked out of school during downpour as 'punishment'? 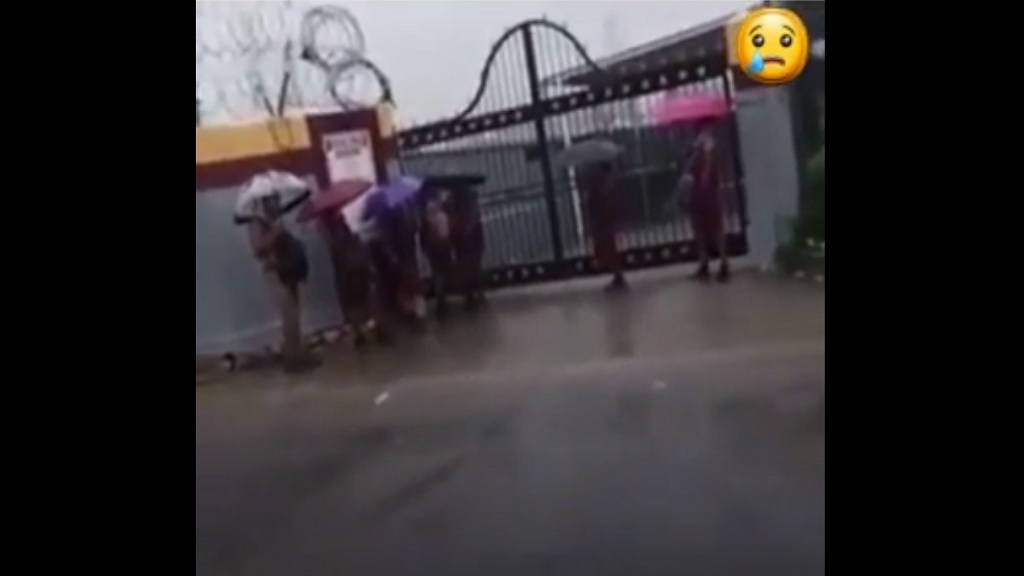 A screen grab from a video of students being locked out of a school campus during a downpour of rainfall, seemingly accompanied by thunder.

Online debate continues to rage following the release of a video showing students, of what appeared to be a St Catherine-based high school, reportedly locked out of the institution during a downpour of rain recently.

While the institution is yet to comment on when the incident occurred and why the students were not allowed inside despite the heavy showers, social media users have already concluded that the young ones were locked out as punishment for perhaps being late.

In the 30-second video, one of the students, who is seemingly recording the morning's events, showed other students with umbrellas at the gate during the heavy downpour.

She can be heard saying:

"No man, dis a slackness. The school need to gwaan better," the female student said, while adding, "Oh God, look how the rain a fall hard..."

A rumbling sound can then be heard, which seemed to signal thunder, which irked the female student, causing her to comment on it.

Her fear can be justified as recently, the inclement weather nationally has been accompanied by several lightning strikes which have resulted in numerous youngsters being injured.

In one heartbreaking scenario, a young boy was killed.

Earlier this month, several students of the Hampton School in Malvern, St Elizabeth were affected by lightning at the institution.

According to reports, sometime after 3pm on October 9, during heavy rainfall, lightning struck a classroom where the students were at a club meeting.

Luckily, the students were not seriously injured, and were released after being treated at hospital.

Meanwhile, throughout the video now in question, there is no sign that the school administration came to the rescue of the students.

"It a come harder. Come like a storm," said an adult in the video recording.

But despite the students being severely exposed to the elements, some individuals on social media have expressed no sympathy for them being reprimanded under the circumstance for being late.

"Well all schools have rules enuh. If you can't abide by them, then unuh tek wet," said one Instagram user.

Another person said, "Get up and go to school early. School starts at 8 (o'clock) and you just arriving 9 or 9.30. I'm not sorry for them (the students)."

"... Unuh a say a di rain mek dem (the students) late, so how the other children on time? Mi sure seh some work place if yuh late u can't come a work; dem send you home. Rules are rules," said another adamant individual.

However, other didn't agree with the perceived decision to lock the students out of the institution.

"Sometime some of these kids are coming from so far... Unuh love gwaan like wi a the most disciplined country inna the world," commented one individual in relation to the video.

Another social media user stated: "They shouldn't lock out the kids if they are late... Punish them (otherwise); let they clean the classroom after school."

Noticeably, the Ministry of Education has repeatedly instructed chairmen of school boards, principals and other school administrators to desist from locking students outside of schools as punishment for lateness and breaches to school uniform rules.

In May of 2015, according to a news release from the Jamaica Information Service (JIS), the ministry said it had then received a number of complaints from parents and other stakeholders that school administrators were consistently locking students outside of schools.

The practice, the then bulletin from the Ministry of Education said, deprived "students of instructional time and increases the probability of abduction or digression that may result in harm or loss."

It further stated that the practice placed schools and the State in violation of a number of legislative frameworks, including the principles enshrined in the Charter of the United Nations, the International Convention on the Rights of the Child (Articles 28 and 29), and the Child Care and Protection Act of Jamaica (Article 28).

School administrators were in 2015 reminded that the contravention of those established pillars of child rights will result in appropriate action being taken by the Ministry of Education.

However, the act by school administrators continues to date - seemingly without any action from the ministry - and has been supported over time by some parents.