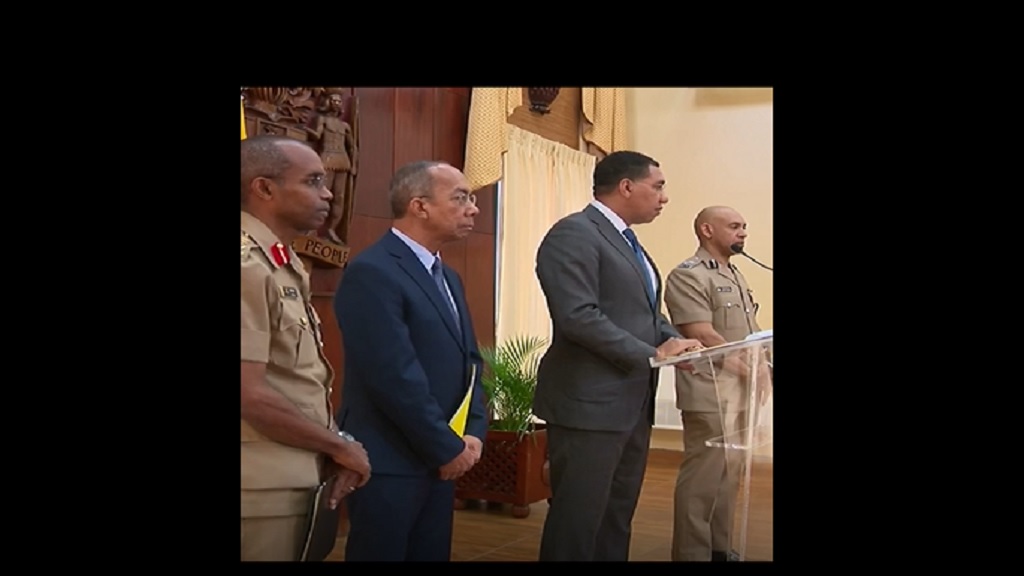 Left to right, the chief of defence staff, national security minister, prime minister and police commissioner at Sunday's press conference at Jamaica House, where the latest state of emergency declaration was made.

A state of emergency (SOE) is now in effect in the violence-plagued East Kingston Police Division which includes sections of several political constituencies.

The latest declaration means that SOEs are now in effect in sections of seven parishes. These are St James, Westmoreland and Hanover, St Catherine and Clarendon, as well as the St Andrew South Police Division and now the Kingston Eastern Police Division.

“On the advice of the chief of defence staff and the commissioner of olice, I have advised and petitioned the governor general to declare a state of public emergency in the Kingston Eastern Police Division…,” Holness told journalists at the hastily-called press conference.

Anderson, in explaining the reasons behind the latest SOE, pointed to the high levels of crime in the division towards the end of 2019, and since the start of 2020, eleven murders have been recorded in the space. This compares to three murders for the corresponding period in 2019.

“It (the violence) is of a scale and of a nature, such that it greatly endangers public safety,” Anderson stated.

He added that, “Eastern Kingston persistently has been one of the country’s crime hotspots with several gangs engaged in deadly inter and intra-gang conflicts or other criminal enterprise.”

Anderson said of the over 32 criminal gangs operating in East Kingston, more than 16 are actively engaged in various violent conflicts in the division. He said there are 33 wanted persons in the division, and another 34 who are listed as “violence influencers”.

The police commissioner said during 2019, Kingston Eastern experienced a concerted increase in violent crimes, especially shootings, when compared to 2018. During the last year, murders there increased by 16 per cent and shootings by 49 per cent.

“Sixty-seven per cent of these were (from) gang-related activities,” said Anderson. He also said that 36 firearms and 222 rounds of ammunition were seized in the division in 2019.

Anderson said the gang activities in the division have disrupted the daily lives of residents, and have left them cowering in fear.

Meanwhile, Meade told the press conference that the SOE will cover parts of Mountain View, going up into the hills; Vineyard Town, Harbour View, Bull Bay and as far as Port Royal.

He noted that it touches parts of the political constituencies of St Andrew South Eastern, Kingston Eastern, St Andrew Eastern and St Andrew East Rural, along with the Kingston Central Police Division.

As part of the justification for keeping the SOEs going, Anderson said: “When we examine the broader national picture, the year 2020 has begun with signs of success in implementation of our policing strategies. Murder is down five per cent when compared with this time last year, and shootings are down seven per cent.”