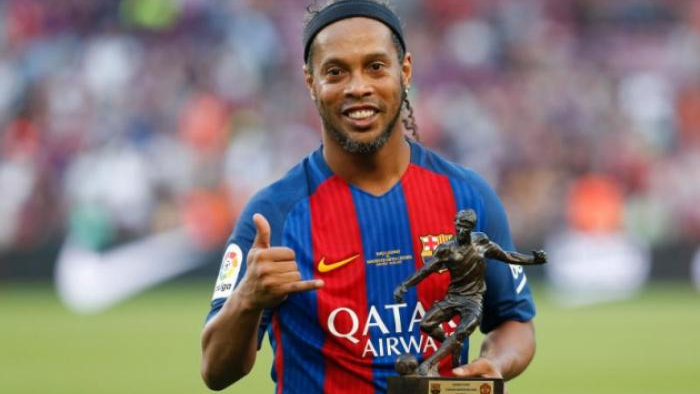 Barcelona legend, Ronaldinho, is swapping the football field for the political bench after confirming on Tuesday he has joined the Brazilian Republican Party (PRB).

The former world player of the year who plans to contest Brazil’s general elections in October by running for either a seat in the Senate or in the Chamber of Deputies, declared he wants to 'give something back to his country'.

Documents approving his candidacy were signed in the country’s capital, Brasilia, before members of the party.

“I am happy to be able to participate in a project aimed at improving our country and bringing modernity, joy and health to the entire population," the ex-Paris St Germain and Milan superstar said during the membership ceremony.

The retired international, who was an integral part of Brazil's 2002 FIFA World Cup-winning team, will be joined at the hustings by his brother, Roberto de Assis Moreira, who also signalled his candidacy for the 2018 elections.

Entering politics has been something the 37-year-old ace athlete has set his sights on since last year when he surprisingly announced he wanted to stand for election with the Patriots Party (PEN) and would align himself with far-right presidential candidate, Jair Bolsonaro.

However, Bolsonaro’s planned alliance with the PEN fell through in January and the congressman, whose presidential campaign is openly based on an anti-gay, xenophobic, racist and pro-gun agenda, has since joined another political party.

The politician’s ultra-conservative ideology appeared at odds with the genial Ronaldinho, whose ready smile, man of the people attitude, and humble beginnings caused many in Brazil to voice their dismay at the soccer star’s potential support.

And the PRB was quick to approach the famous number 10 shirt when the Bolsonaro ticket failed to materialise.

Welcoming the former attacking midfielder to the party, PRB President, Senator Eduardo Lopes, who is seen in the video signing the agreement, recalled Ronaldinho's achievements on the pitch and said: “This a historic moment like so many other moments in Ronaldinho's life.

“He gave Brazil his talent and ability and now with his wonderful life story, he will contribute to (the country through) the PRB.

“And he will wear the number 10 shirt again. But this time he will be signed to the PRB,” the politician added suggesting there may be a political campaign that capitalises on Ronaldinho's brand as ‘R10’ in the run-up to the elections.

Celso Russomano, leader of the party in the Chamber of Deputies, continued: "(Ronaldinho) has great experience in the field of sports and wants to defend the flag in government. His name is well loved, and he is a player of character and expression.

“He has done a lot for the sport as a player and I hope he does much more as a politician.”

Roberto, who has managed his brother’s career since he started out, explained that as Brazilians the pair ‘care deeply about the country 'and want to 'give something back'.

“It (will be) an honour to help our population. We have grown from (humble beginnings) through sport and we know what can be done for children and young people,” Roberto said.

“(We have had) conversations with (the PRB) about technology and innovations (and) there are many things that we can do to help the population. It will be a pleasure to be able to collaborate.”

The PRB said in a statement the “siblings’ membership strengthens the party’s status and will attract voters. They are two great names, who want the best for our country.”

Ronaldinho, who has held an official role with the United Nations Children's Fund (UNICEF), since February 2006, will follow in the footsteps of another footballing legend Romario if elected. The former prolific striker took up political office in 2011 and now represents Rio as a senator.

Mayor of Rio de Janeiro, Marcelo Crivella, was elected on the PRB platform. The party is linked to the controversial Universal Church of the Kingdom of God (UCKG), a neo-Pentecostal Christian denomination which has over eight million members in Brazil.

The UCKG came under media scrutiny in February 2000 following the tragic death of London schoolgirl, Victoria Climbie, who was starved and tortured by her guardians.

The eight-year-old was taken to a UCKG temple in Haringey by her great-aunt Marie-Thérèse Kouao and Carl Manning, the aunt’s boyfriend, hours before she died. The child’s relatives, who were convicted of her murder in 2001, claimed she was possessed by the devil and they asked for an exorcism.

The practice did not happen and the UCKG, which has temples in the UK, US, Europe, Africa and India, was later cleared in a Charity Commissions probe of misleading the public by offering exorcisms and cures.