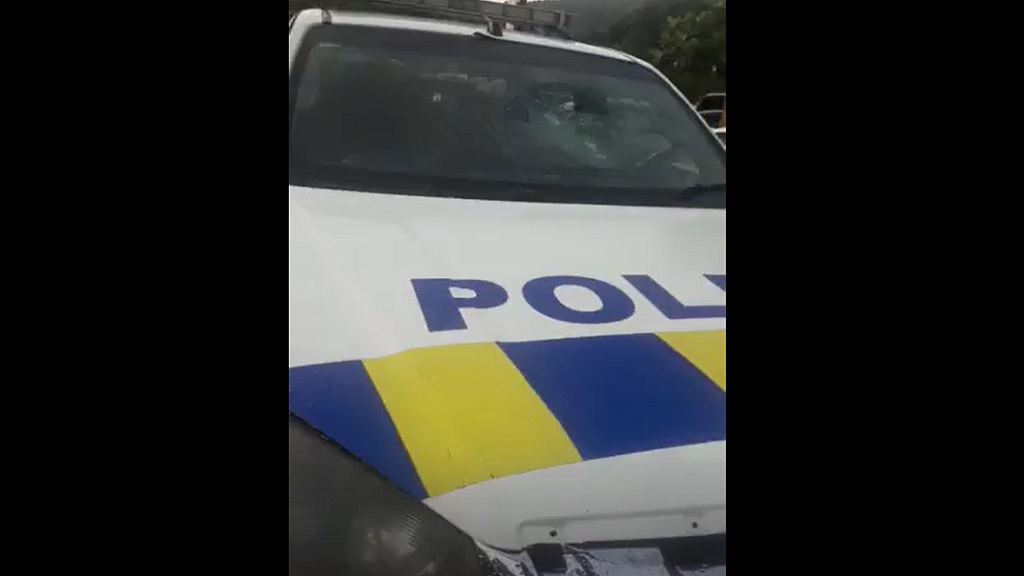 A screengrab from a video of the damage to a police service jeep in St Ann after an attempted clampdown of an illegal party in the Parry Town area of the parish.

Reports are that about 9:30, a police team was on patrol in the community when they observed what appeared to be a party in progress in breach of both the Disaster Risk Management Act and the Noise Abatement Act.

When the officers arrived at the location where the illegal event was taking place, given the nature of the terrain, the police vehicle was parked along the main road and the officers proceeded on foot to the venue.

The officers instructed that the music be turned off, warned the patrons of breaches of the law, and instructed them to go home.

A man who was later identified as the promoter of the event reportedly became boisterous and insistent that the party should not be ended.

The police team reportedly attempted to arrest him, but he fled to a nearby yard, to which the police team proceeded in a continued effort to take him into custody.

While the promoter was being arrested, a group of angry party patrons who were leaving the event, reportedly descended upon the police vehicle, hurling boulders and other missiles into the windscreen and other windows, as well as slashing the tires.

A video of the damaged service vehicle is carried below.

The vehicle was eventually transported by a wrecker to the police station.

The constabulary’s forensic investigators are currently using the relevant science and technology to help determine who may have been involved in the damaging of the police service jeep.

The St Ann police are asking for persons who have any information that might assist in their investigation to come forward and share what they know by calling the St Ann’s Bay police at 876-972-2211, the police 119 emergency number, or Crime Stop at 311.

The promoter of the party, 31-year old Rashant Lawrence, was arrested and charged with breaches of the Disaster Risk Management Act and resisting arrest.

Earlier this month, the St Ann police flagged party promoters and goers in the garden parish for their worrying trend of breaking the island's curfew orders to attend illegal events that were being staged in the parish.

Just this week too, police personnel were verbally and physically attacked and even injured by residents of a section of Seaview Gardens in St Andrew, where law enforcers had gone to shut down a party during curfew hours.

Several persons were arrested for breaching the Disaster Risk Management Act in that incident and a follow-up police operation in the same community.

The public is being reminded that the constabulary’s enforcement of the orders under the Disaster Risk Management Act is for public safety amid the threat of the coronavirus (COVID-19) pandemic. Given the potential for the rapid spread of the virus at large, condensed gatherings, the police are mandated to shut them down for the public good.