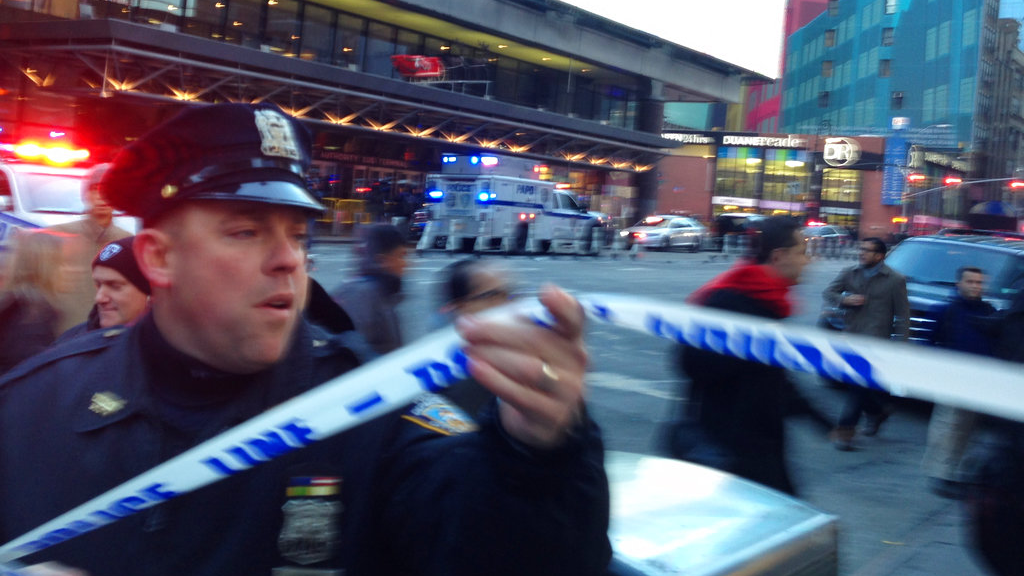 Police respond to a report of an explosion near Times Square on Monday, Dec. 11, 2017, in New York. (AP Photo/Charles Zoeller)

A pipe bomb that was strapped to a man went off in the New York City subway near the Times Square area of Manhattan on Monday, injuring the suspect and another person on the platform at the height of the morning rush hour, law enforcement officials said.

The person on the platform was being treated for non-life-threatening injuries.

Another person on the platform sustained non-life-threatening injuries

The officials spoke to The Associated Press on condition of anonymity because they were not authorized to speak publicly about the incident.

The explosion, which happened around 7:30 a.m., triggered a massive emergency response by New York police and fire both above and below ground, tangling subway and bus service at the nearby Port Authority bus terminal.

White House Press Secretary Sarah Sanders has tweeted that President Trump has been briefed on the explosion.

Video from above the "Crossroads of the World" showed lines of police and emergency vehicles, their lights flashing, lining the streets and no other vehicle traffic moving.

Everything around the Port Authority in the 42nd Street area was shut down — a surreal scene of still at what would ordinarily be a bustling rush hour.

New Jersey Transit buses headed to the Port Authority were diverting to other locations following the explosion.

NJ Transit says buses are taking passengers to Secaucus and Hoboken. From there, they can take trains or PATH into the city.