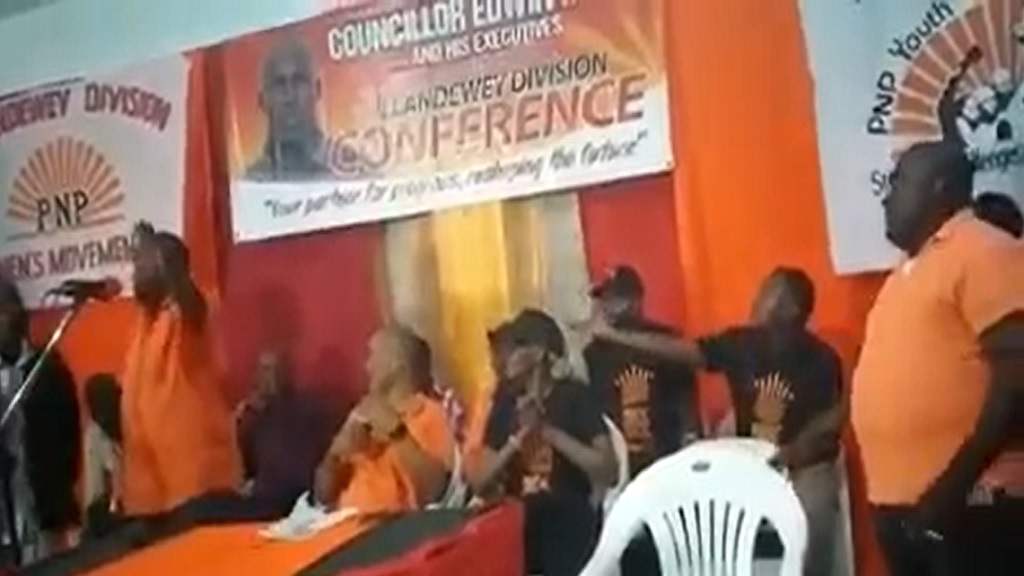 Hubert Williams (left), Councillor for the White Horses Division addresses Comrades from the podium at a PNP meeting on Sunday. Seated beside him is PNP prospective presidential candidate Peter Bunting.

A somewhat hilarious video clip making the rounds on social media has given the clearest indication yet that the leadership battle between Central Manchester Member of Parliament, Peter Bunting, and People’s National Party (PNP) President, Dr Peter Phillips, will be intense.

With persons inside the Opposition party lining up behind either of the two men in the week since Bunting publicly declared his intention to challenge Phillips for the party’s top post, an exuberant Hubert Williams, Councillor for the White Horses Division in the St Thomas Municipal Corporation who is a Phillips supporter, on Sunday crashed a divisional conference where Bunting was the main speaker.

The conference took place in St Thomas and, while Bunting waited to address the meeting, Williams rose to his feet and proceeded to declare his support for Phillips. There were no attempts to shut him down, at least initially, in the nearly 4-minute long video recording, a copy of which has been obtained by Loop News.

Williams began by stating that he was seriously disturbed by comments he had seen on social media, including speeches he had heard. He did not specify the comments nor the social media platforms, or which of the two men the comments were directed at.

However, Williams told the gathering that while he was busy campaigning for Damion Crawford in the lead up to the April 4 by-election which the PNP lost, he came across the slogan “building with Bunting”. He did not state where or how the slogan was displayed.

“That can’t be building, that’s breaking down of the People’s National Party,” Williams declared before suggesting that those who were backing Bunting were being pessimistic towards Phillips.

“When I hear some of these things (being said) about Dr Phillips, it hurts a lot,” the councillor said.

With a significant majority of Jamaicans preferring the youthful Prime Minister Andrew Holness over the aging Phillips who turns 70 in December, according to public opinion polls, Williams suggested that experience should trump youth.

At this point, music was introduced which somewhat drowned out Williams’ voice but the heavyset man could be seen rocking to the music instead of leaving the podium. At this point a man walked up and whispered something to him. However, when the music stopped, Williams promptly picked up where he had left off, telling Comrades that experience mattered, and that Phillips had the requisite experience to lead the party.

All the while, Bunting was seen sitting, waiting his turn to speak.

However, as Williams attempted to continue, he was again drowned out by the music which, the second time around, was being played at a much higher decibel, as well as a rising chorus of voices of Comrades expressing their disapproval at him.

Bunting could be seen trying to quiet them down at which time the recording ended.