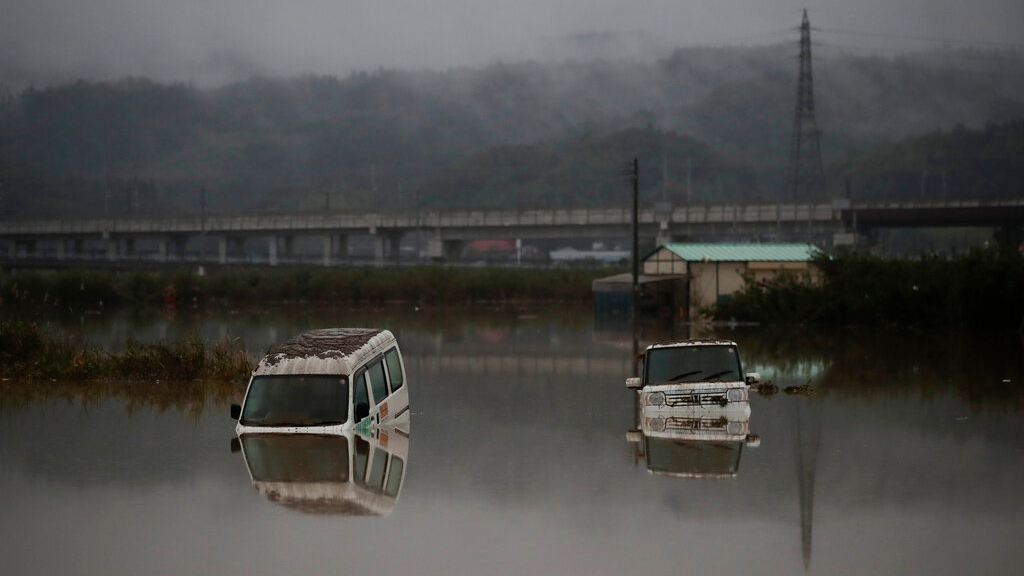 Two vehicles are submerged in floodwaters Monday, Oct. 14, 2019, in Hoyasu, Japan. Rescue crews in Japan dug through mudslides and searched near swollen rivers Monday as they looked for those missing from a typhoon that left as many as 36 dead and caused serious damage in central and northern Japan. (AP Photo/Jae C. Hong)

Rescue crews dug through mudslides and searched near swollen rivers Monday as they looked for those missing from a typhoon that left dozens dead and caused serious damage in central and northern Japan.

A riverside section of Nagano, northwest of Tokyo, was covered with mud, its apple orchards completely flooded and homes still without electricity.

Japan's Kyodo News agency reported that 48 people died from the typhoon, 17 were missing and some 100 were injured.

The government's Fire and Disaster Management Agency, which is generally more conservative in assessing its numbers, said 24 people were dead and nine were missing.

Experts said it would take time to accurately assess the extent of damage, and the casualty count has been growing daily.

Hagibis dropped record amounts of rain for a period in some spots, according to meteorological officials, causing more than 20 rivers to overflow. In Kanagawa prefecture, southwest of Tokyo, 100 centimetres (39 inches) of rain was recorded over 48 hours.

Some of the muddy waters in streets, fields and residential areas have subsided. But many places remained flooded Monday, with homes and surrounding roads covered in mud and littered with broken wooden pieces and debris. Some places normally dry still looked like giant rivers.

Some who lined up for morning soup at evacuation shelters, which are housing 30,000 people, expressed concern about the homes they left behind. Survivors and rescuers will also face colder weather, with northern Japan turning chilly this week.

Soldiers and firefighters from throughout Japan were deployed to assist with rescue efforts. Helicopters could be seen plucking some of the stranded from higher floors and rooftops of submerged homes.

Prime Minister Shinzo Abe said the government would set up a special disaster team, including officials from various ministries, to deal with the fallout from the typhoon, including helping those in evacuation centers and boosting efforts to restore water and electricity to homes.

"Our response must be rapid and appropriate," Abe said, stressing that many people remained missing and damage was extensive.

Damage was especially serious in Nagano prefecture, where an embankment of the Chikuma River broke.

In one area, a few vehicles in used car lots were flipped over by the waters that had gushed in, covering everything with mud. Apples swept from the flooded orchards lay scattered in the mud.

Areas in Miyagi and Fukushima prefectures in northern Japan were also badly flooded.

In such places, rescue crew paddled in boats to reach half-submerged homes, calling out to anyone left stranded.

Tokyo Electric Power Co. said 35,100 homes were still without electricity early Monday evening in Tokyo and nearby prefectures that the utility serves. That was down from nearly 57,000 earlier in the day.

East Japan Railway Co. said Hokuriku bullet trains were running Monday but were reduced in frequency and limited to the Nagano city and Tokyo routes.

Mimori Domoto, who works at Nagano craft beer-maker Yoho Brewing Co., said all 40 employees at her company were confirmed safe, though deliveries were halted.

"My heart aches when I think of the damage that happened in Nagano. Who would have thought it would get this bad?" she said.

Tama River in Tokyo overflowed, but the damage was not as great in the capital as in other areas. Areas surrounding Tokyo, such as Tochigi, also suffered damage.

Much of life in Tokyo returned to normal on Monday. People were out and about in the city, trains were running, and store shelves left bare when people were stockpiling were replenished.