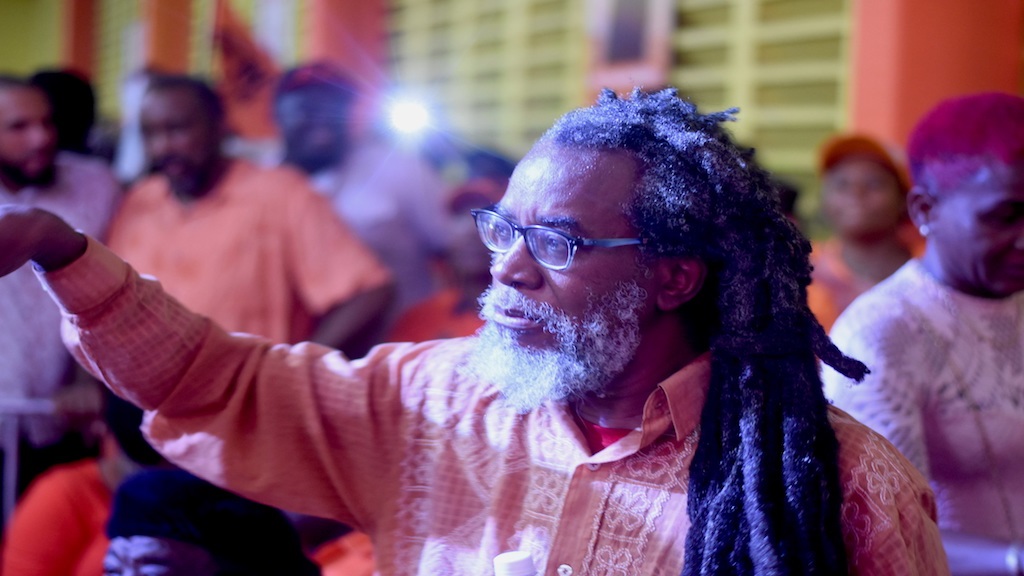 Half Pint acknowledging the audience at the People's National Party (PNP) rally in South West St Andrew on Sunday.

Jamaican political meetings are filled with fun and revelry, and of course there are the occasions when a person on the platform misspeaks.

Public speaking is by no means an easy task, and to leave off a syllable, mispronounce a name or identify someone wrongly, can happen to anyone.

To him, waxing lyrical comes as second nature. He does it with his eyes closed.

So how did he find himself in such a mess on stage at the final rally for Opposition Leader, Dr Peter Phillips, ahead of Saturday’s face-off with challenger, Peter Bunting, for the leadership of the Opposition PNP?

How does one confuse legendary reggae artiste, Half Pint, for the equally great reggae crooner, Cocoa Tea, especially as a fellow ‘Rastaman’?

And this after a spirited introduction of ‘Rastaman Chant’, a Bob Marley original that was well covered by Cocoa Tea, Crawford still managed to get his wires all crossed.

See Crawford’s artistic blunder in the video below, with Phillips’ ‘rise in employment’ having somehow narrowly escaped the video light.

Not once, but twice during what he himself labelled as a two-minute speech at the rally at Tarrant High School in South West St Andrew on Sunday, he went way off-key.

“And I would like to address Cocoa Tea,” he said in clear reference to Half Pint who sat bewildered at the front of the audience.

With the crowd nudging him with the correction in spurts, this while Crawford stared intently at Half Pint who was at the conference beside his long-time manager, George Phang, somehow it still did not hit home to Crawford that anything was amiss.

The result: he repeated himself.

That elicited a grimace from Western Westmoreland Member of Parliament (MP), Wykeham McNeil, beside Crawford on stage, buttressed by an awkward smile from Phillip Paulwell, also at the head table.

But then, Crawford had ‘good company’ in error on the night, as he was in fact outdone by none other than his leader, Dr Phillips.

In reference to the performance of the Government in power so far, Phillips said: “Employment is going up,” clearly having bowled the wrong ball, with the ‘unemployment’ one still in his pocket.

Two biggies in just one event, making for a great night of political gaffs.