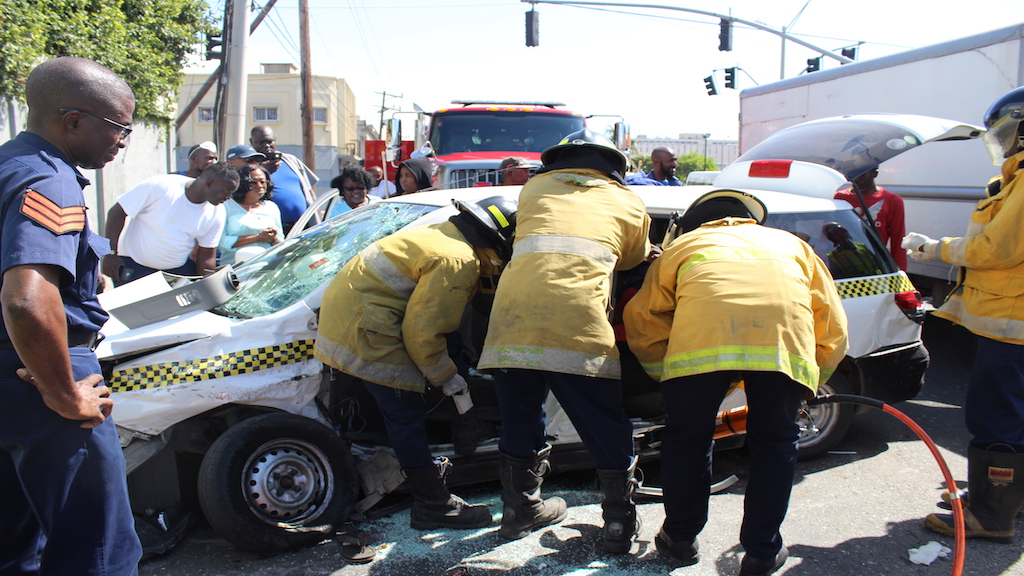 Firefighters work to extricate a woman from the mangled taxi in downtown Kingston on Monday morning.

Firefighters rescued a route taxi passenger who was trapped inside the vehicle following an accident in downtown Kingston on Monday morning.

According to alleged eyewitnesses at the scene, the taxi was travelling westerly along Port Royal Street about 10:30 am when, upon reaching the intersection at Pechon Street, it collided with a Honda CRV going in a northerly direction.

After the collision, the sole passenger of the taxi was trapped inside the mangled remains of the Nissan station wagon and had to be cut out by members of the Jamaica Fire Brigade from the vehicle.

Loop News' video editor Shawn Barnes was on the scene and shares footage of the rescue in the video below.

Once she was pulled from the vehicle, the woman was stretchered to the back of a police pick-up truck and rushed to hospital. Her condition is not known at this time.

The driver and a passenger of the CRV were said to have suffered minor injuries and were taken to receive medical treatment.

In the meantime, the male driver of the taxi, who was alleged to have jumped the red light resulting in the accident, was not hurt. He was observed at the scene constantly shaking his head in disbelief at the incident.

When asked about the circumstances around the accident, he told Loop News: "Bwoy, it happened so fast... People dem a seh a me bruk the stoplight but mi nuh know about that."

VIDEO: Onlookers rush to the rescue of crashed biker in St Andrew

80-year-old man mowed down in Westmoreland