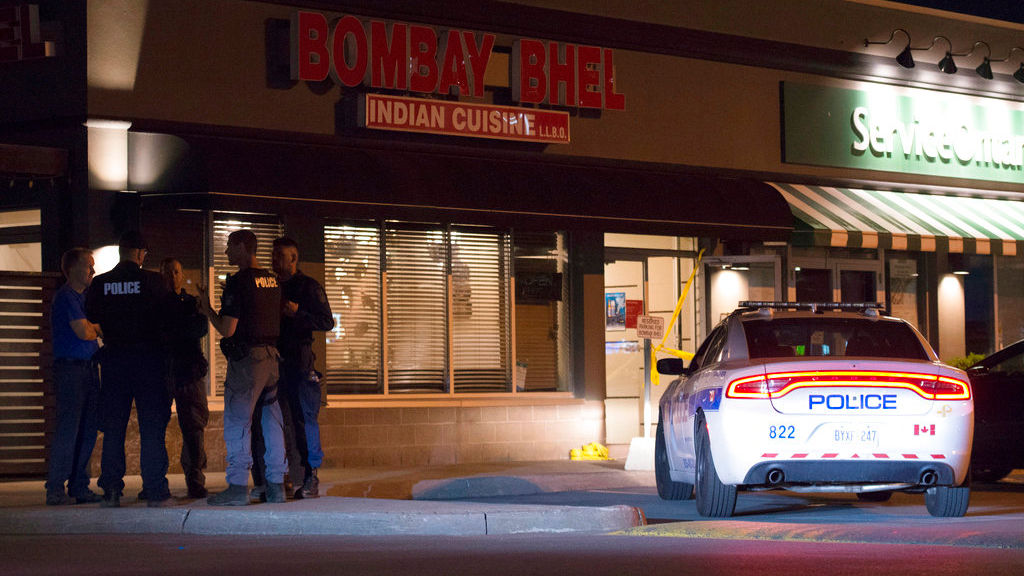 An explosion caused by an "improvised explosive device" ripped through an Indian restaurant in a mall in the Toronto suburb of Mississauga, wounding 15 people, Canadian police said.

"Every police resource is being used right now to locate the people responsible for this horrendous act."

Evans said three people suffered critical injuries and were taken to the hospital while the remaining 12 victims suffered what she described as minor and superficial injuries. Police later updated the condition of the three critically injured patients to stable. The ages of the injured range from 23 to 69.

The explosion happened just after 10:30 p.m. on Thursday and the plaza where the restaurant is located was still sealed off on Friday. Television footage showed an injured woman limping away from the restaurant.

"Nothing was said by these individuals," said Peel Region Sergeant Matt Bertram. "It appears they just went in, dropped off this device and took off right away."

Bertram said authorities couldn't say what the device was yet.

"Different callers called in and said it was firecrackers or some said gunshot sort of noises. I don't think it was an explosion that was rocking anything," he said. "Until we can get in there and analyze the material after the search warrant we won't be able to say what it was."

Rafael Conceicao, a student from Sao Paulo, Brazil, was near the restaurant when the explosion occurred. He said there was a child's birthday party inside the restaurant at the time.

"Glass was broken in the street ... Everything was destroyed. Lots of blood in the floor. Many people were screaming. They were trying to run out from the restaurant," he said.

Andre Larrivee, who lives in a nearby condo, said he was watching television when he heard a loud explosion.

"It was really loud," he said, comparing the noise to an electric generator that had exploded at a nearby construction site recently.

Police asked for the public's help and released a photo of the suspects, both with dark hoodies pulled over their heads and their faces covered. Police believe they fled in a car.

Peel regional police described the first suspect as in his mid-20s with a stocky build, wearing dark blue jeans and a baseball cap with a light gray peak. The second suspect was described as a little shorter with a thin build, wearing faded blue jeans, a gray T-shirt, and dark-colored skate shoes.

The Indian consulate in Toronto tweeted it had opened a helpline for those seeking assistance following the explosion. Vikas Swarup, India's High Commissioner to Canada, tweeted that India's Consul General in Toronto visited the injured in the hospital. He also said that the three Indian-Canadians who were reported to be critically injured are stable.

Mississauga Mayor Bonnie Crombie said she was thankful there were no fatalities.

"This is certainly not anything you would expect to happen in Mississauga, not my Mississauga. This is not the Mississauga I know," Crombie said. "This is a heinous crime that has been committed."

Trini in Canada asked to prepay for meal, restaurant ordered to pay up