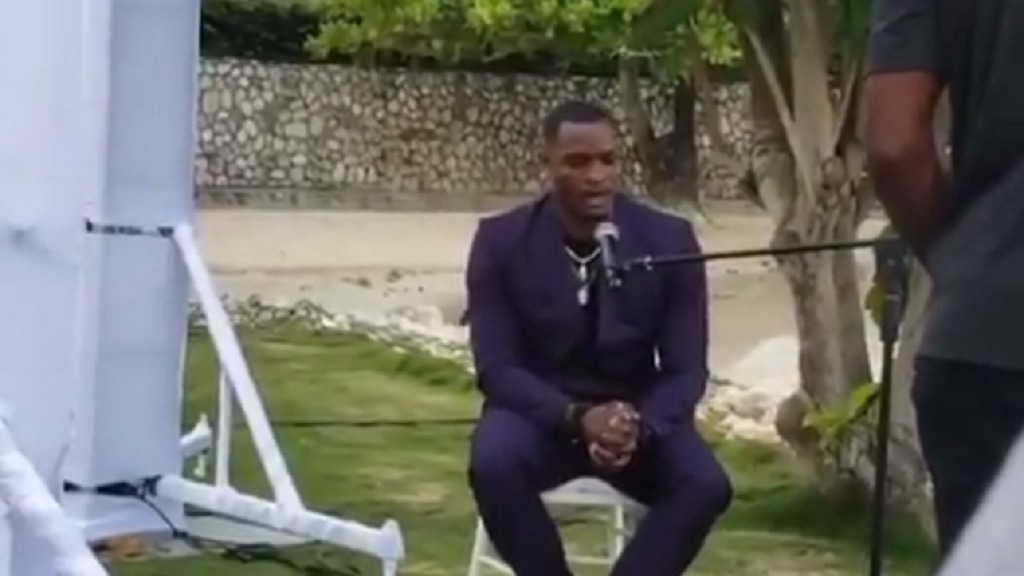 A screen grab from a video of top-flight Jamaican hurdler, Omar McLeod, singing at the recent wedding of his colleague, Elaine Thompson.

Several sports stars, both locally and internationally, have dabbled with establishing careers in music. Some have had success, while others have not been so lucky.

On the local scene, sprint legend Usain Bolt, now retired, made his musical debut with his project, the Olympe Rose Riddim in July, which featured vocals by a number of popular local acts, including Ding Dong, Dexta Daps, Munga Honorebel and Chris Martin.

Footballer turned deejay, Ricardo 'Bibi' Gardner, also had a song on the riddim.

Jamaica and West Indies cricketer, Marlon Samuels, and a number of other regional cricketers, such as Dwayne ‘DJ Bravo’ Bravo, Curtley Ambrose, Omari Banks, have also been numbered among regional sportsmen to have ventured into the music business, some with recorded dancehall singles.

Internationally, English footballer, Chelcee Grimes, who plays for women's football club, Fulham, has balanced being a sportswoman and a musician. She has "written songs for pop icons, Kylie Minogue, Dua Lipa, Kesha and The Saturdays, as well as performing her own songs," according to the British Broadcasting Corporation (BBC).

So when former World Champion and defending Olympic Champion 110-metre hurdler, Omar McLeod, on Tuesday uploaded a short video on Twitter of him performing a cover version of the Ed Sheeran's hit tune, 'Perfect', tongues began wagging as to whether the Jamaican will be venturing down the musical road in the future.

McLeod performed the song on Saturday, November 2 at the wedding of his "sister from another mister", Elaine Thompson, the reigning double Olympic sprint champion, and her beau, former athlete and coach, Deron Herah.

McLeod's 12-second snippet of his performance of 'Perfect' has been getting good reviews from his fans, as up to early Saturday it had over 11,000 views. The video has received 339 likes, 32 retweets and several comments.

Sheeran, who first released 'Perfect' in 2017 as a single which went on to become a global hit, later re-released the song as a duet with pop superstar, Beyonce, which also became widely recognised globally.

He was seated, perfectly attired, with his eyes closed as he belted out his version, though short, while adding his own interpretation of the song.

Several of his followers expressed varying reactions, ranging from surprise to excitement, at the discovery that the Jamaican was not only a talented hurdler, but also has good vocal ability.

Among those commenting was the newlywed, Elaine Thompson, who used three heart emojis to express her love for her friend's rendition of 'Perfect'.

"But Omar, you can sing man! This is brilliant," she said.

"Think you meant to write ‘Version’, but what a pleasant surprise! You're incredible!" The company tweeted.

Another of McLeod's fans added: "What a voice! When is the single coming out babes?"

The Jamaican has been the standout national performer in the sprint hurdles over the years. He won the world indoor and Olympic gold medals in 2016, followed by the world title in 2017.

However, 2019 ended in disappointment for him, as he failed to defend his World Championship title in Doha, Qatar, where he fell in the finals and was disqualified.

McLeod is hoping to put that behind him and focus on the 2020 Olympics set for Tokyo, Japan.

But before that, or even after, could he be releasing music? What do you think? Can the Jamaican stamp his name in that arena?