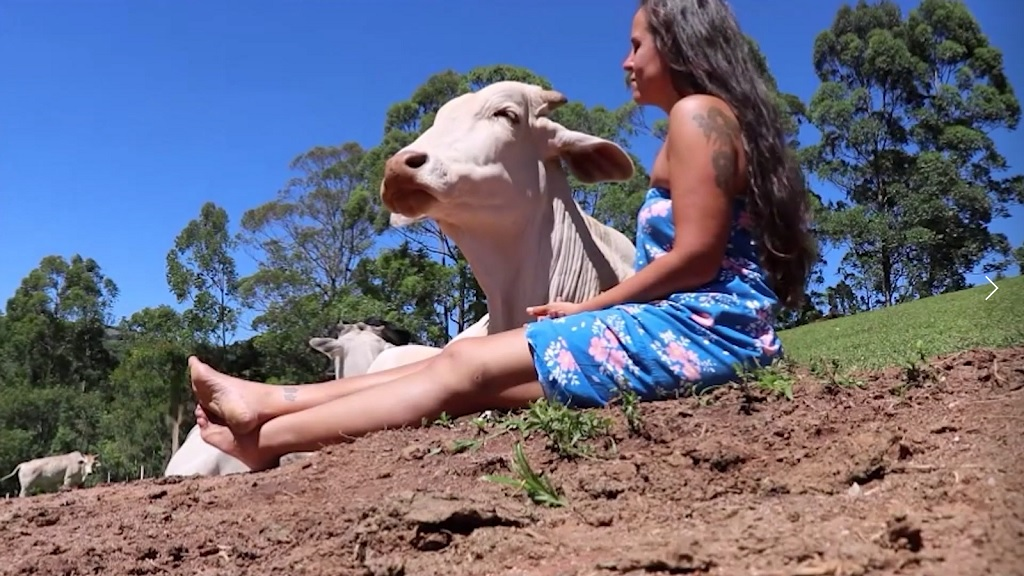 When butchers approached him brandishing knives, Hanuman the bull fought for his life.

Hanuman was since rescued by a Brazilian woman and now lives peacefully at a ranch in Brazil.

Patricia Andrade Varela Favano regularly sunbathes with Hanuman the bull, pets him and even kisses him on the nose, such is their close bond.

The pair have become almost inseparable at their ranch in Brazil, where Patricia cares for many rescued animals.

The bull - a Nelore, known for their incredible strength - had escaped from an illegal slaughterhouse by smashing its way through the makeshift walls.

But after running amok on the streets of the local town, villagers and slaughterhouse workers were keen to lynch the stricken beast.

Thankfully for Hanuman, local police officers sought the help of Patricia - a known local animal shelter owner - to help them calm the bull down.

Hanuman had refused tone approached by anyone, lashing out wildly as they inched near.

But with Patricia, he eventually calmed down and police officers allowed her to take him back to her sanctuary, where she cared for him.

She said: “He was about to get killed by someone in the slaughterhouse. The man in charge of this task even tried to do the deed, but his power wasn't enough to bring the bull down.

“Half injured, Hanuman destroyed the walls of this illegal slaughterhouse and ran through city streets.

“People were apparently after him with knives from their kitchens.

“Police officers told me the scenes reminded them of medieval times. They said they had called me because he deserved to live, such was his desire to live.

“When he arrived at the Sanctuary, he was upset like a baby.

“When I talked to him in the truck he immediately stopped crying. And here, never ever, has he attacked anyone.

“We became close friends. That rare kind which doesn't need to be spoken, but can be felt by each in the other’s presence," she said.

Watch the video footage below: